Longtime volunteer clocks in 18 years of service and counting 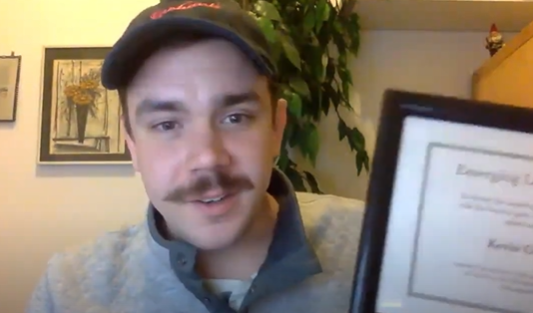 To say Kevin Crowley is dedicated to the Active Transportation Alliance is an understatement.

Crowley, 33, has been volunteering for Active Trans for 18 years — more than half of his life. In that time, he has gradually taken on more responsibilities, playing an active and influential role in Active Trans’ events.

In recognition of his longtime commitment and support to the nonprofit, Crowley is the recipient of Active Trans’ 2021 Volunteer of the Year Award.

Crowley’s journey with Active Trans began in 2005 when he was a 15-year-old high school student. Born and raised in Chicago, Crowley preferred to walk and use public transit in the city.

But in high school, he added bicycling to his sustainable transportation repertoire. Bicycling eventually became his main mode of transportation.

He rode his bicycle to and from school; to do errands; and for recreation, including group bike rides around the city.

Crowley’s growing interest in bicycling prompted him to volunteer for Fifth Third Bike the Drive, Active Trans’ annual signature bike ride that shuts down DuSable Lake Shore Drive to cars so that people biking can have exclusive access to ride this iconic road.

“When I was in high school, I was looking for opportunities to volunteer. I stumbled on Bike the Drive in my high school newsletter,” he says. “I had just gotten into biking, and I started doing Critical Mass rides and neighborhood rides.”

At the Bike the Drive event in 2005, Crowley was assigned to be a ride marshal. His duties entailed monitoring a section of Lake Shore Drive for incidents involving riders participating in the event and assisting them with tasks like patching up flat tires.

After a few years of serving as a ride marshal, Crowley was promoted to Bike the Drive’s communications manager, which included managing the ride marshals, helping the marshals address rider incidents, and coordinating with the City of Chicago and the Chicago Fire Department.

Managing communications for a massive event like Fifth Third Bike the Drive, which can draw more than 20,000 bike riders a year, isn’t easy, but Crowley’s ability to stay calm, patient, and organized helps him to succeed and flourish in the role, according to Jason Jenkins, a former Active Trans employee who has worked with Crowley for several years.

“Having worked with Kevin at command central in the communications tent over the past several years has been a joy and a pleasure. If you were to build a communications manager to spec it would be Kevin,” Jenkins says. “His cool head under pressure, low key presence, and wry wit makes any situation easier.”

Crowley continues to serve as communications manager for Fifth Third Bike the Drive today — which he says he looks forward to volunteering for every year.

“I like the sights and sounds of Lake Shore Drive when it is shut down to cars,” says Crowley, an associate manager for Uber. “I like looking at the lake and the skyline with no cars, and it brings the community together. It’s just really a cool feeling that we’re taking over this major roadway for a moment. It’s like a pipe dream that we can do that.”

Over the years, Crowley has become a consistent volunteer that Active Trans can rely on and has enjoyed volunteering for Active Trans’ other bike rides.

As a member of Active Trans’ Events Committee, Crowley has helped plan and test other rides, including the Boulevard Lakefront Tour, which would guide riders through Chicago’s neighborhoods, exploring historic points of interests.

FROM THE INSIDE OUT

As a volunteer for Active Trans, Crowley says his role gives him a better appreciation and insight for the work Active Trans does to make walking, bicycling, and public transit safe and accessible.

For example, because he enjoys biking the trails in the city and north suburbs, he is excited to see Active Trans working to create a connected trail network in the region so people can take advantage of these underutilized assets for both recreation and transportation.

To continue to support Active Trans’ advocacy work, Crowley plans to continue volunteering for the organization for the foreseeable future.

“Working with Active Trans I get to meet and engage with people who are also passionate like I am about biking, better commuting, a cleaner world,” he says. “Active Trans lives and breathes sustainable transportation.”

In addition to the 2021 Volunteer of Year Award given to Crowley, 2021 Advocate of the Year Awards were given to Rochelle Jackson, Matt Portman, and Christopher Valadez.