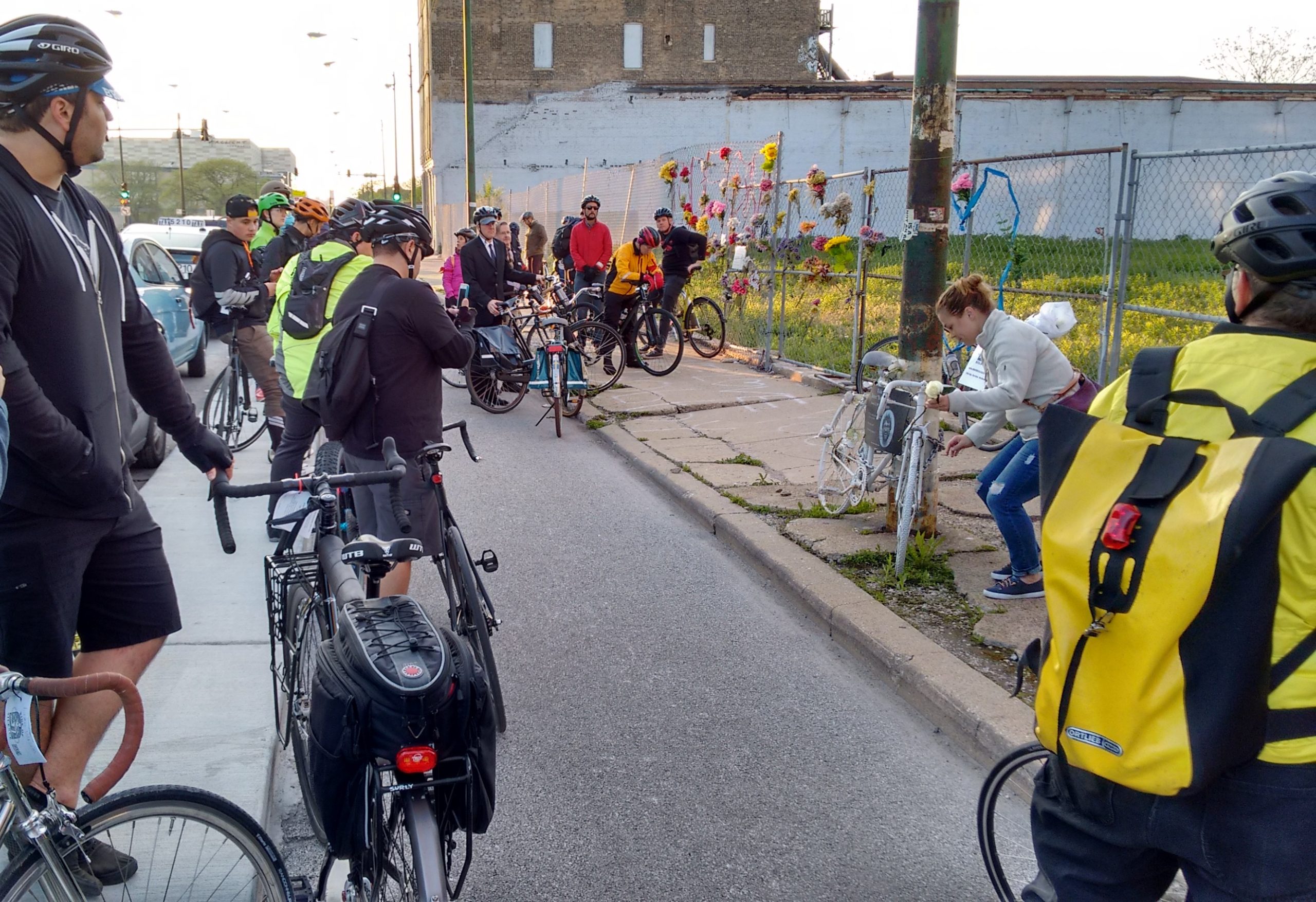 On Wednesday, May 18, you’re invited to join others around the world on an annual bicycle ride to honor the people killed while biking in the past year.

In addition to honoring those people killed by drivers, the ride highlights the urgent need for infrastructure that will make biking in Chicago safer and more welcoming for people of all ages and abilities.

“We need to remember that this tragic loss of life is unnecessary and completely avoidable,” said Chicago Ride of Silence organizer Elizabeth Adamczyk. “This is a chance to mourn those who have been killed while biking, visit their ghost bikes, and share a silent moment of respect and reflection.”

The ride is part of a series of events during Chicago Bike Month.

Beginning at the Thompson Center at 5:30 p.m., people will ride in silent procession along a 7.2-mile route through the Loop, West Loop, River North, and along the Lakefront Trail, visiting the following fatal crash sites of the past year:

The Thompson Center, where the ride starts, is a building designed by architect Helmet Jahn, who was killed by a driver last spring in suburban Compton Hills.

The ride honors and remembers all the people who lost their lives while biking on Chicago streets. This year we remember in particular those mentioned above as well as the following crash victims.

Ride participants are encouraged to join a post-ride gathering at the Emerald Loop, 216 N. Wabash.

“Deaths of people biking have increased in the past couple of years in Chicago,” said Adamczyk. “This is unacceptable. We are calling attention to this needless loss of life and demanding safer streets. This annual event strengthens our resolve to eliminate traffic fatalities and urge the city to do much more to keep people safe while they’re biking.”

(Here’s a printable version of the route map with turn-by-turn directions.)

Advocates from across Chicago are calling on city officials to immediately upgrade the low-quality bike infrastructure on Milwaukee Avenue – Chicago’s “bike superhighway” – and key corridors like it across the city. They are specifically calling for a citywide network of concrete protected bike lanes to prevent crashes and save lives.

This year the Chicago Ride of Silence is sponsored by the Active Transportation Alliance, F.K. Law, and Steetsblog Chicago. Ride organizers request that black armbands be worn by participants and red armbands if you’ve been hit by a driver while biking (arm bands will be provided). Helmets are required; lights are highly recommended for the ride home.

In the event of inclement weather, participants are asked to gather at the post-ride location.

This year Illinois has nearly 20 rides occurring in communities throughout the state. The Ride of Silence is held in many locations in the US, Canada, Australia, Europe, South and Central America and the rest of the world. This year there are nearly 300 locations registered throughout the world.