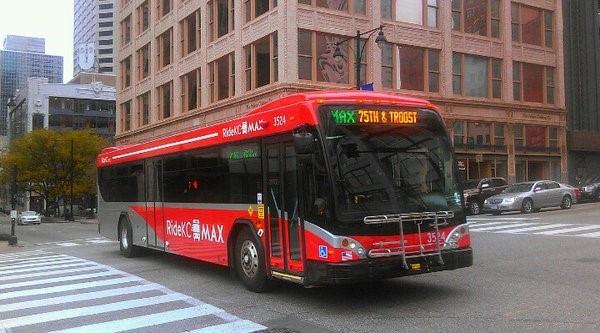 While most cities in the Midwest are dominated by the automobile, Kansas City is using Bus Rapid Transit to make its downtown more dense, walkable and accessible.

Traditional bus routes provide a critical service but can present challenges to the people who use them. If a bus line has long wait times, restrictive hours, uncomfortable bus stops, and frustratingly slow commutes, taking the bus becomes less appealing.

Bus rapid transit, or BRT, tackles each of these problems with innovative and cost-effective solutions such as creating bus-only transit lanes, giving busses signal priority at intersections and constructing more substantial bus stations with seating, protection from the elements, and arrival time boards that take the guesswork out of waiting for the bus.

The best part? BRT offers these benefits at a fraction of the cost of streetcar or rail expansion.

The route features significantly improved bus station infrastructure with a special focus on urban sustainability. In addition to ample seating and protection from Kansas City’s often harsh weather, the stations include recycling receptacles, pervious paving and rain gardens to manage storm water runoff, and solar powered lighting and trash compactors. One of the new stations’ most popular features is real-time bus arrival signs.

The Max BRT Line can only be described as a huge success for Kansas City. The system added another BRT Line along Troost Avenue in 2011, and is currently in the process of constructing two more BRT Lines along Prospect and State Avenues.

In total, BRT in Kansas City has grown from the original six-mile line to a full interconnecting 36-mile system in the course of just eleven years.

The MAX Bus is a source of pride for residents of Kansas City, and often cited by the US Department of Transportation as a model for successful BRT.

And the benefits of BRT aren’t limited to transportation. Kansas City is leveraging the success of the MAX bus to revitalize the surrounding neighborhoods and spur economic growth in an inclusive and sustainable way.

The city recently received a grant from the Department of Transit to aid in the expansion of transit oriented developments along the MAX route, and help Kansas City achieve its goal of creating a dense and walkable urban core.

The opening of Loop Link is an important step in bringing the proven benefits of BRT to Chicago, but there is significant room for improvement and expansion.

For example, creating a BRT Line along Ashland Avenue would create an affordable, reliable, high speed transportation corridor stretching all the way from Irving Park Road to 95th Street.

This is the eighth post in a blog series on Bus Rapid Transit (BRT) in the U.S. Learn more about our BRT organizing and contact us to get involved.