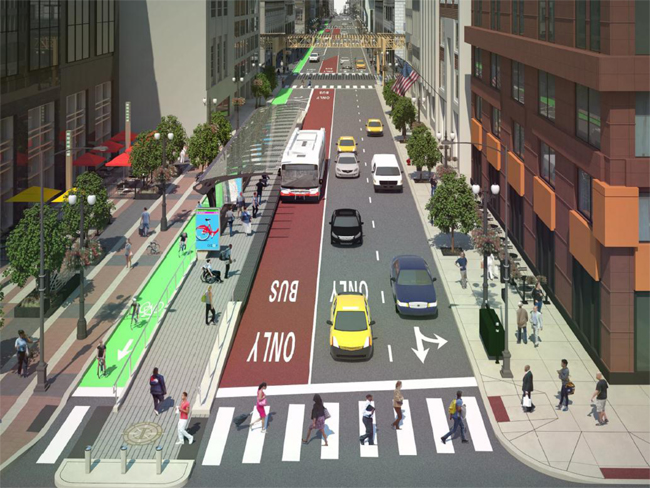 The Loop Link is an exciting improvement for the thousands of Chicagoans who ride the bus, bike and walk across the Loop every day.

We urge the city to continue to improve the corridor by adding more features like prepaid boarding that will further speed up service.

The city is installing its first protected intersections at five spots along the corridor, allowing people riding bikes to more safely travel through these high-conflict areas where crashes most often occur.

The Chicago Department of Transportation (CDOT) and Chicago Transit Authority (CTA) have said they are continuing to test technology that would allow riders to pay before they board the bus and speed up the boarding process.

Active Trans spoke with transit riders from neighborhoods throughout Chicago who are excited about the potential benefits of the new additions to corridor. You can see some of their comments below.

We’re also helping recruit volunteers to assist with on-street outreach to educate transit riders in the Loop about the project as well as people biking, walking and driving over the next few weeks.

Ian Adams, 29-year-old Ukrainian Village resident who works in the Loop
“Getting to the Loop is pretty straightforward, but transit within the loop is really lacking. I’ll likely ride the bus more often with the new corridor and ride my bike in the new protected bike lanes when the weather is good. I’m in business school in Streeterville and need to get across the Loop in the evenings when the streets are totally jammed.”\

Matt Carley, 27-year old Lakeview resident
“I frequently travel to Ogilvie and Union Stations to ride Metra to the suburbs to visit family and friends, and the dedicated bus lanes will save me time. I don’t have a car and rely on public transit and my bicycle to get around and truly experience the city.”