Illinois lags other states in walking and biking policy 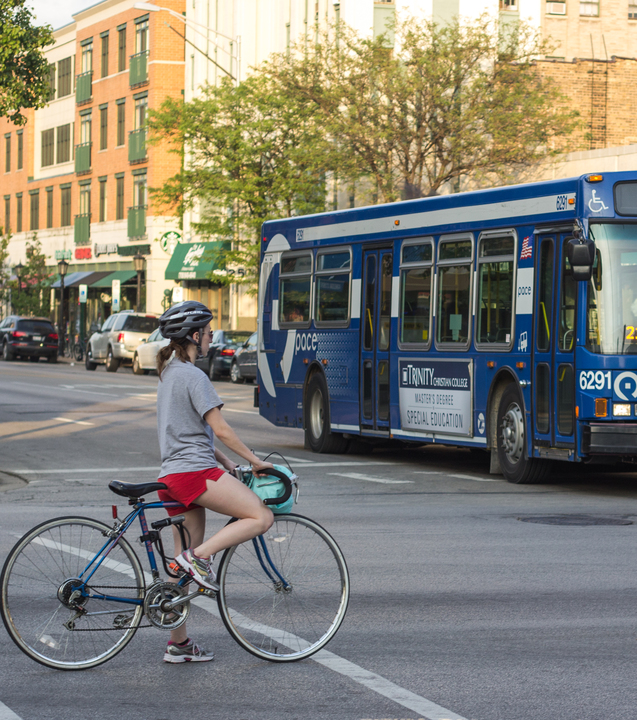 Illinois is becoming a more walk- and bike-friendly state, but it still has a long way to go to catch up with national leaders, according to a new report from the Safe Routes Partnership.

The partnership, a national nonprofit working to advance safe walking and biking to schools and other everyday destinations, recently released its 2020 State Report Cards. Illinois scored a 92 out of 200 points, putting it in the second-lowest tier. The state earned 74 points in 2018.

California and Massachusetts are national leaders with more than 150 points.

The best news comes in the funding category where Illinois scored 10 out of 10 for dedicating state funding to walking and biking. Active Trans worked with legislators, partner organizations, and supporters across the state to win Illinois’ first dedicated fund for walking and biking in the 2019 capital bill.

The $50 million per year fund is one of the largest in the nation and is scheduled to be rolled out this summer. It includes special provisions to advance transportation equity, with at least 25 percent of the funding directed to high-need communities and low-income areas.

Illinois gets credit for its Complete Streets law, which Active Trans — then the Chicagoland Bicycle Federation — and a broad coalition of advocates helped pass in 2007. But implementation of that law remains questionable to this day, contributing to the state receiving only three out of 20 points on the strength of the policy. The law needs updating because it was developed before many best practices were established.

There are exceptions to the law that the Illinois Department of Transportation (IDOT) frequently uses to get around the requirement. When features like sidewalks and bike lanes are included in projects, communities are asked to cover 20 percent of the cost of those elements, while the state covers 100 percent of the cost for the portion of roadway dedicated to cars.

For more than a decade, Active Trans and other advocates across the state have fought to address the issues and improve this policy. Earlier this year we worked with legislators to introduce a bill that would eliminate the 20 percent local match requirement. The bill, unfortunately, wasn’t able to advance before the pandemic halted the legislative session. Reforms like these remain top priorities moving forward.

Illinois earned five out of a possible 10 points for adopting an active transportation plan. Many aspects of the state’s bicycle plan, which was released in 2012, are out of date and it does not address pedestrian safety. In addition, several of the most important action items from the plan were never implemented, including establishing a program to support bike planning in low-income areas and creating a transportation equity working group to focus investment in communities of color and low-income neighborhoods.

IDOT recently secured funds to develop a new active transportation plan for the state so Active Trans and our partners and supporters may have an opportunity to raise these issues.

Active Trans worked with legislators in 2019 to pass a resolution calling for IDOT to implement these outstanding action items, eliminate the local match requirement, and other reforms to make the state more walk- and bike-friendly. Unlike state laws, resolutions are non-binding so IDOT is not forced to act, but this demonstrates strong, bipartisan legislative support for these ideas.

Join our advocacy supporter list to stay up to date on these issues and other advocacy priorities.