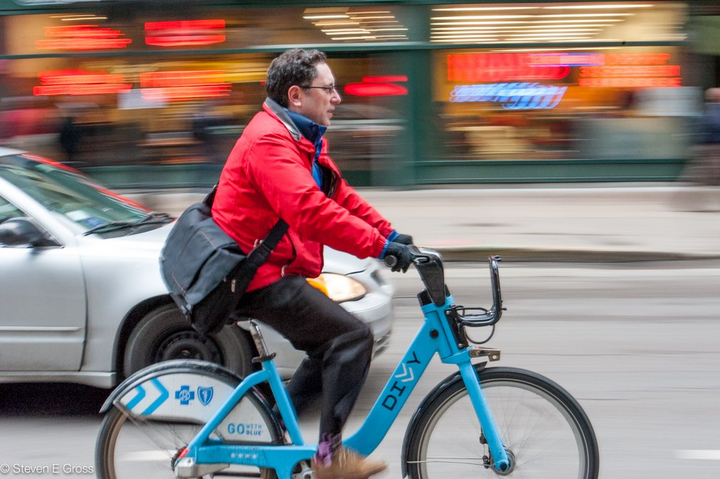 With gas prices surging, Mayor Lightfoot and Governor Pritzker need to step up and make it safer and easier for people to walk, bike, and ride public transit.

The media is saturated with stories of outrage about the cost of gasoline and official proposals to lower prices. This way of looking at the issue inevitably ignores how the intentional development of our car-centric, sprawling region contributed to this problem – and how alternative forms of transportation can be part of the solution.

It’s on all of us as transportation equity and sustainability advocates to demand a better approach.

The average price of gas in metro Chicago is heading toward $5 per gallon and is expected to continue to rise. Analysts predict prices will remain high for many months, if not years, putting pressure on household budgets in a time of high inflation across the board.

The increase at the pump stems from how oil corporations are responding to Russia’s tragic war on Ukraine. This reality demonstrates the outsized influence oil companies and petrostates have on quality of life in communities around the world.

So how are our elected officials responding to this surge? Would these proposals really have an impact on residents’ lives? What should be done instead?

State and local officials are, predictably, responding with proposals to suspend gas taxes that would save residents a very modest amount of money at the pump. Governor Pritzker proposed to cancel the scheduled two cents per gallon increase in the state gas tax. Mayor Lightfoot said she is considering shrinking or eliminating the city’s eight cents per gallon gas tax.

These proposals are misguided and harmful for several reasons:

They would not save Chicagoans much money. Canceling the state gas tax increase would save the average driver around $13 annually. Cutting the city’s gas tax in half would save drivers $26 over one year. These savings would have almost no impact on household budgets.

Wealthy Chicagoans would benefit the most. As income increases, people drive more and are more likely to own larger, less fuel-efficient vehicles. Many low-income residents and people with disabilities cannot afford or are not physically able to drive. If your goal is to deliver financial support to families who need it the most, gas tax holidays are not doing it.

The harmful effects of driving would only get worse. Shrinking the price of gas without acknowledging how elevated levels of driving harms Chicago neighborhoods would be irresponsible. Traffic fatalities in the Chicago area have been surging over the last two years, with people walking and biking most at risk of being hit and killed. Neighborhood air quality and climate-related threats are getting worse, with transportation the leading contributor to greenhouse gas emissions statewide – and growing. Black and Brown Chicagoans disproportionately bear the burden of these harmful effects of driving.

Instead of making gas slightly cheaper, what if our elected officials focused on helping people drive less?

Fixing our car-centric transportation infrastructure is going to take decades. In the meantime, people will continue to drive for some trips when an alternative mode is not feasible. But many trips taken by car in the Chicago region could easily be shifted to a cheaper and more sustainable mode, and it is the responsibility of state and local officials to make that shift easier.

Reduce costs for more sustainable modes. New Zealand recently announced all transit fares would be cut in half due to the surge in gas prices. CTA, Metra, and Pace have received billions in federal funding to sustain bus and train service during the pandemic, and some of that could be used to reduce the base transit fare in response to this crisis. Half price Divvy rides has a nice ring to it as well.

Make walking, biking, and riding transit safer and easier. One of the many advantages of building more bike lanes and bus lanes is it can happen quickly. For the first time in decades, the Chicago area is awash in transportation funding thanks to major local, state, and federal infrastructure bills. Leaders need to stop building new roads and pouring money into simply resurfacing dangerous streets without making them any safer. Instead, officials could direct our agencies to get to work redesigning unsafe streets and building safe and connected walk, bike, and transit networks.

Focus investments in high-need Black and Brown communities. The regional response should be focused on helping people who suffer the most from high gas prices and today’s inequitable system: Black and Brown people and low-income residents. Projects and policies should be designed to specifically benefit these populations.

An alternative plan focused on helping Chicagoans drive less would save families money in the short term and put us on a path towards a more sustainable transportation future.

Governor Pritzker, Mayor Lightfoot, and our transportation agencies need to move on from their low-impact, regressive gas tax proposals and instead focus on making transformational changes to our transportation system that would make residents’ lives better in the short- and long-term.