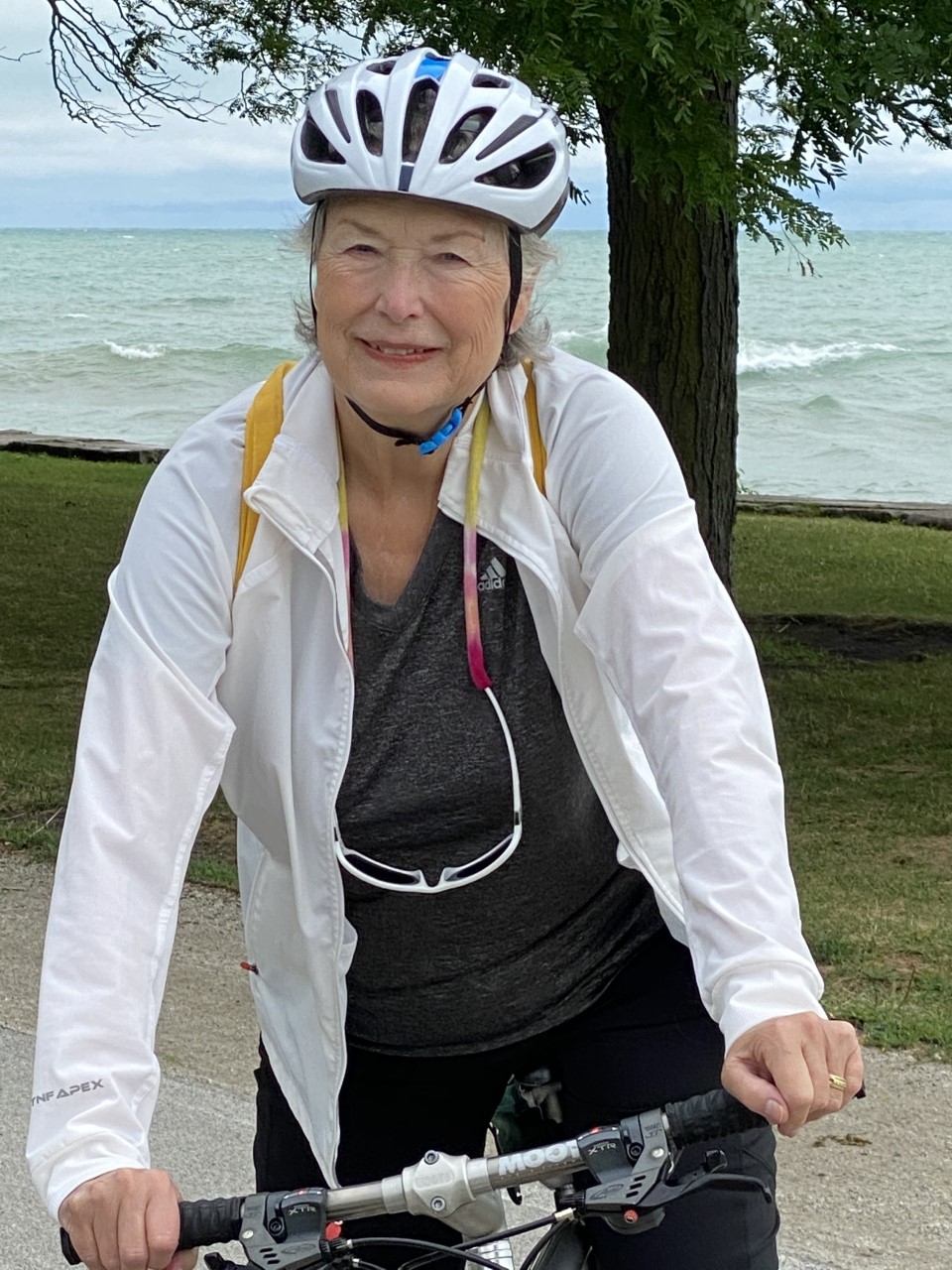 Ever wonder how the Active Transportation Alliance got its start? Well, Suzan Pinsof can tell you firsthand.

Pinsof played a critical role in Chicago’s bicycling movement in the early 1980s when she worked at the Northeastern Illinois Planning Commission, the regional planning organization that was the precursor to today’s Chicago Metropolitan Agency for Planning. She was tasked with promoting bicycling as a sustainable and alternative mode of transportation in support of the Clean Air Act of 1970.

It proved to be a daunting challenge for Pinsof. Bicycling wasn’t on the radars of most government agencies and transportation stakeholders in the 1980s. Streets in Chicago and the surrounding suburbs were designed for cars.

The lack of bike paths and connected bikeway networks made it difficult for cyclists to navigate the region safely and easily. In addition, most government agencies didn’t have staff and budgets specifically allocated for designing and building bicycling infrastructure.

“As I looked into it, I realized that pretty much nothing was being done for bikes at the governmental level in Chicago. There was really no one in any governmental agency that was paying attention to bicycles,” Pinsof explains. “And so, I thought ”

“Whatever bikeways that did exist at that point were very disconnected, usually a one-off path in a community or, in the case of the forest preserves, they didn’t think about how these systems could be interconnected,” Pinsof says. “I just realized that there was so much potential to do a lot more to encourage and accommodate bicycling.”

As Pinsof met with national and local advocates, leaders, and experts in the bicycling community, she recognized the need to create an organization that could convene these important stakeholders around creating bicycling infrastructure. 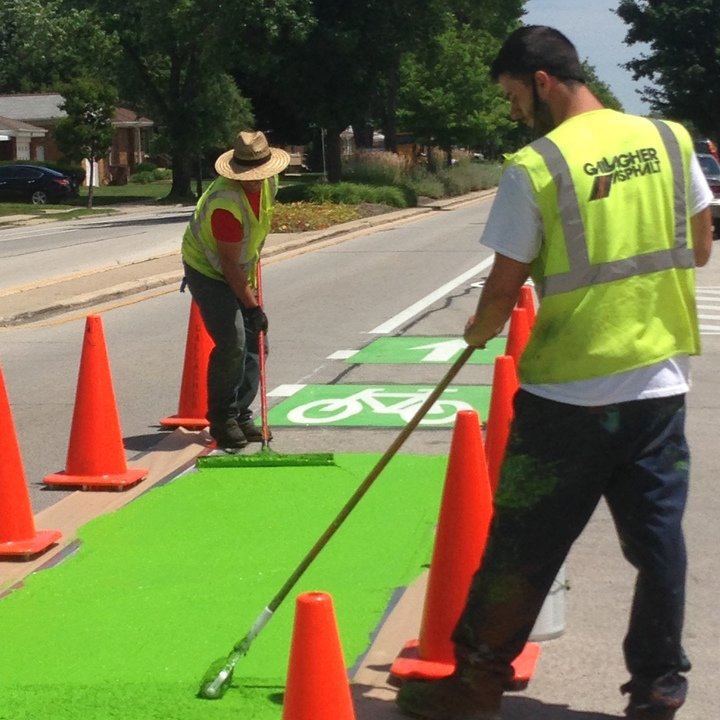 That’s when she created the Chicagoland Bicycle Federation, the advocacy organization that would ultimately evolve into Active Trans. In 1985, she recruited board members from national and local cycling organizations, including the League of American Wheelmen (now called The League of American Bicyclists); 30 riding clubs in Chicago; and the Chicago Area Bicycle Dealers Association. Pinsoff then hired Randy Neufeld as CBF’s executive director, which was initially a volunteer position.

Pinsof, Neufeld, and the CBF board worked tirelessly to inform government leaders, community partners, cycling advocates, urban planners, engineers, public policy professionals, and cycling experts about the lack of safe bicycling infrastructure in the region and importance of working together to figure out the best ways to improve bicycling conditions.

CBF’s hard work paid off when the nonprofit successfully convened a meeting with John LaPlante, the acting commissioner of the Chicago Department of Public Works who recently passed away, as well as representatives from the Chicago Park District, Chicago Department of Transportation, and Chicago Department of Planning and Development in 1985. This meeting not only prompted these government agencies to consider and evaluate the future of bicycling in Chicago, but it gave CBF a seat at the table as well—a move that demonstrated that CBF had earned their respect.

“I was just so excited because finally we got all those people together to talk about bikes,” Pinsof says.

From 1985-2010, Pinsof served on the board of CBF and later when the nonprofit changed its name to the Active Transportation Alliance in 2008 after expanding its mission to include pedestrian and public transit advocacy.

During her tenure, she was particularly proud of how the nonprofit grew to play an essential role in enhancing bicycling conditions in the region, becoming a go-to resource for government agencies and urban planners on all things bicycling.

For example, CBF worked with government leaders and bicycling advocates to earmark a portion of the transportation funding from the state and federal governments to pay for bicycling infrastructure in the region, including bike racks and bike lanes.

In addition, local governments began turning to Active Trans for help with creating bicycle-friendly environments in their cities. For example, CBF drafted Chicago’s Bike 2000 and Bike 2015 Plans. In 2011 Active Trans guided the public process for Chicago’s Streets for Cycling 2020 Plan, which lays out the vision for expanding bicycling throughout the city. Since then, Active Trans has delved deeper into the world of bike planning by producing or assisting with dozens of bike plans in suburban communities and regional corridors.

Pinsof is also impressed with how Active Trans has helped popularize bicycling in the Chicago region with bicycling events that encourage residents to take up cycling. Fifth Third Bike the Drive, she said, has become the seminal biking event in the city.

Pinsof has praised Active Trans for helping to create bicycling facilities that promote cycling as a mode of transportation for commuting and recreation. For example, she touts Active Trans’ advocacy for The 606, the 2.7-mile elevated park and trail system that runs through Wicker Park, Bucktown, Logan Square, and Humboldt Park. In addition, Pinsof supported Active Trans’ work to create separate paths for bicyclists and walkers and runners on Chicago’s Lakefront Trail.

Pinsof was also pleased to see that Active Trans was successful in advocating for the passage of the 2018 Bike Walk Education in Schools Act, which requires school boards statewide to adopt policies for educating students from kindergarten to eighth grade about biking and walking safety. 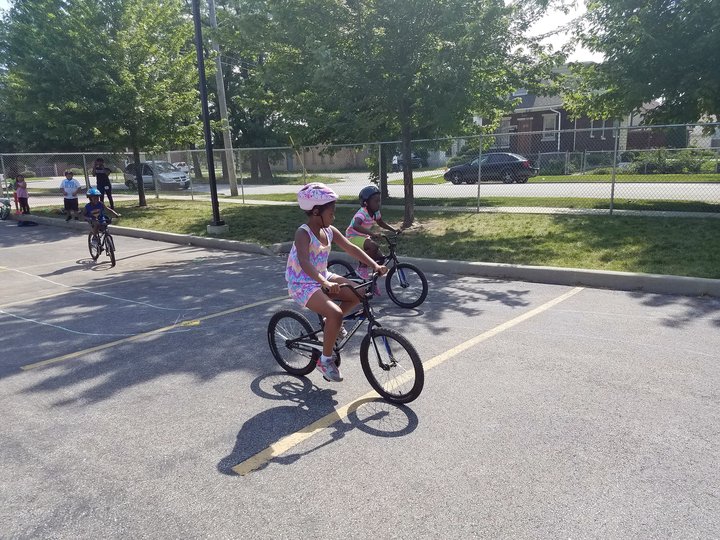 “What I’ve always wanted to see in the schools is what I would call mobility education,” Pinsof says. “Where you start in kindergarten or first grade with teaching kids how to cross the street safely and how to walk safely. Then around fifth and sixth grades, you get students out on bikes and really drill into them how to safely bike in the city. And then in seventh and eighth grades and even high school, you teach kids how to take transit, so that children would be introduced to safe walking and biking and be comfortable using transit in the city.”

Pinsof retired from the Active Trans board in 2010, but she is still an active member and supporter of the nonprofit she helped to found. “We need sustainable transportation to address the climate crisis and to make better use of our cities. It would be great to give over less space to cars and more to other more enjoyable activities,” she says. “There is joy and a sense of community in walking, biking, and using transit that doesn’t happen when we’re driving. I am proud of the work that Active Trans has done during the last 30 years to make our city and our region a better place to live.”

Over the years, Active Trans has been a major force in making our region a better place for people like you who walk, bike, and use public transit. But there is still so much work to do and this is a challenging time for Active Trans. Please donate to Active Trans to ensure that this work continues moving forward.