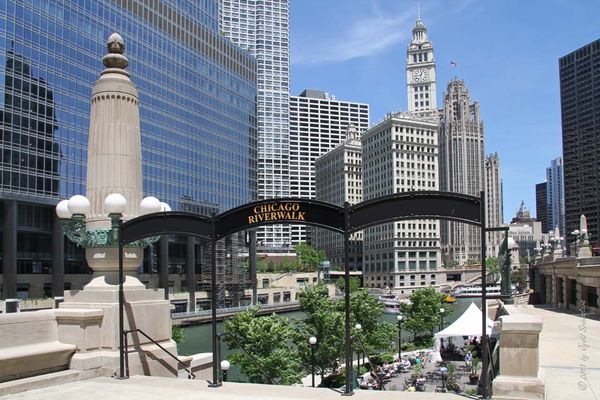 UPDATE (6/25/19): According to the Chicago Department of Transportation (CDOT), bicycling is allowed on the path when the Riverwalk is not congested. Reports indicate security guards are no longer asking people biking to dismount. Learn the latest on the issue and Active Trans’ advocacy efforts in the Chicago Reader.

A lack of transparency and mixed messages has led to widespread confusion and frustration about biking on the Riverwalk along the Main Branch of the Chicago River.

Currently, security guards are enforcing an all-out ban on bike traffic after 9 a.m., even when conditions allow for people to safely ride on the Riverwalk.

We are urging the city and 42nd Ward Alderman Brendan Reilly to work with Active Trans, our members and supporters, and other stakeholders to revisit this approach. Let’s develop a common sense alternative, based on data and best practices, that would create a safe and fun environment along the Riverwalk.

While the Riverwalk is a space that should prioritize pedestrians, there are many times when people can safely and comfortably ride a bike there. A reasonable accommodation would be to allow people biking to use the Riverwalk and ask cyclists to dismount when conditions become crowded. These guidelines should be reinforced through clearly visible signs and pavement markings.

The current ban is just the latest in a series of developments over the last year that have added to the confusion and frustration, while preventing a common sense approach from being implemented.

Contributing to the frustration, none of the decisions to limit or restrict biking have been based on any publicly available data or evidence outlining whether a problem truly exists, and if so, to what extent.

Looking back on the past year, it’s easy to see why people are unclear on where things stand.

Compare how this process has unfolded to the recently completed Lakefront Trail separation. Multiple public meetings were held, and the park district consulted advocates directly on design decisions. And there has been a commitment to monitor conditions and address any issues as they emerge.

Given the important space the Riverwalk has come to occupy in our transportation network, we think it deserves a transparent and evidence-driven process to determine the best way to keep everyone safe.

Other cities are able to manage a common sense approach that adapts to conditions within shared bicycle and pedestrian spaces. We should be able to do the same.

Over the long-term, we hope the city will develop additional alternative low-stress connections for people on bikes between the Loop and the Lakefront. In fact, Active Trans is working closely with a group of stakeholders and experts to develop potential concepts for just such a connection.

We look forward to sharing the results of that work soon. In the meantime, we hope we can move towards a common sense approach to peaceful coexistence on the Riverwalk.