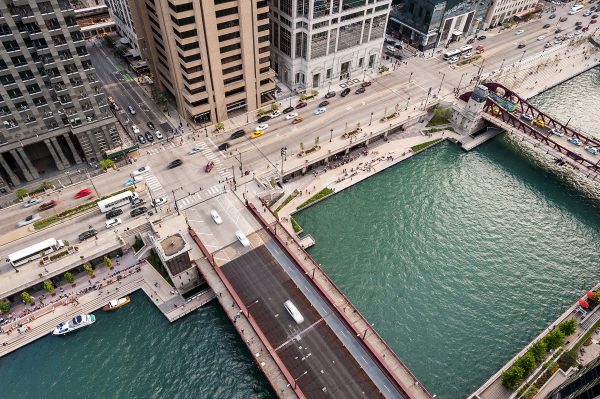 If you’ve ever walked or biked along the Riverwalk on the Main Branch of the Chicago River — especially during summer months — then you know it’s both a dynamic public space and a challenge to navigate on foot and bike.

The Chicago River will only grow in popularity in the coming years as one of the city’s premier destinations to work, play, and live. For this reason, it’s time to improve walking and biking along the river so all Chicagoans can enjoy it.

To build support for improvements, Active Trans is spearheading a project to develop concepts for addressing congestion experienced by people walking and biking along the Riverwalk and Upper Wacker Drive (pictured). The project is part of our campaign for a continuous 27-mile Chicago River Trail.

We’re honored to be working with Ross Barney Architects, the architectural firm that designed the Chicago Riverwalk and leader of a movement to revitalize the Chicago River for more than twenty years. We’re also working with Friends of Downtown, a neighborhood-based organization focused on promoting the city’s central business district.

Alongside these partners, an advisory committee of more than twenty public and private sector stakeholders, including the office of 42nd Ward Ald. Brendan Reilly, is helping us carry out the project.

It’s an important time to develop and push ideas for better walking and biking on the Riverwalk and Upper Wacker. It’s a key moment because the City of Chicago is working to extend the Riverwalk south from Lake Street to Ping Tom Park in Chinatown. And the newly renovated Riverwalk East — from Michigan Avenue to Columbus Drive — just opened. This newly configured stretch of the Riverwalk was given more public art, more seating, restrooms, and inviting green space.

To the north, the Wild Mile Chicago and Lincoln Yards will eventually add riverfront trails. Our project will advance concepts for making easy connections to these future destinations.

The goal is to create complete Chicago River Trail on the North and South Branch. Without a doubt, a continuous trail would transform areas around the river into vibrant open space while connecting people to jobs, shopping areas, and recreation opportunities.

We’re also looking forward to improving walking and biking on Upper Wacker Drive for people who work in the area, including our staff (Wacker Drive has been home to Active Trans’ office for the past 1.5 years).

Upper Wacker Drive is a key connection with a rich history. Originally part of the Burnham Plan, Wacker Drive was first constructed — from Lake Street to Michigan Avenue — in 1926 at a cost of $26 million. It also happens to be the only street that crosses the city’s north-south (State Street) and east-west (Madison Street) directional points.

Where is the project headed next and how can you get involved?

We’re planning to conduct a variety of activities to gather ideas and data from the study area. This will start in May and last until the project wraps up in September. Stay tuned for a project survey later this month.

To receive updates on this project as well as opportunities to get involved, please join our campaign for a continuous Chicago River Trail.