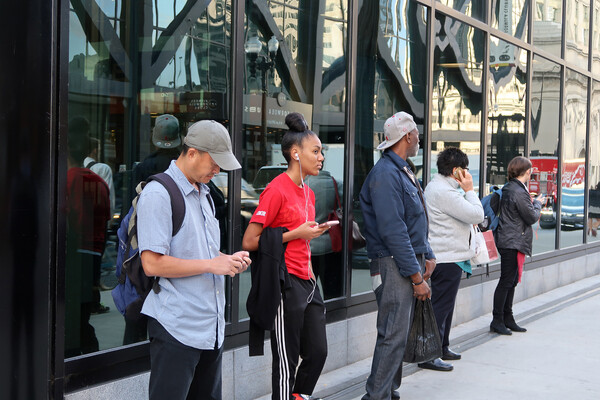 Active Trans recently joined with allies to mobilize around a city council hearing that shined a light on CTA’s recent service shortcomings and reliability problems.

Before the hearing, a press conference was held by aldermen, transit worker unions, and several organizations, including the Active Transportation Alliance. The same day our allies at Commuters Take Action rallied outside the CTA board meeting.

All these efforts together resulted in greater visibility for the serious issues currently afflicting our transit system.

When the Chicago City Council Committee on Transportation and the Public Way convened its long-awaited hearing on current CTA issues, many participants were dismayed that its president, Dorval Carter Jr., failed to appear. In the parlance of post-pandemic CTA riders, Carter “ghosted” the hearing.

ATU Local 241 President Keith Hill, representing bus operators for CTA and Pace, and ATU Local 308 President Eric Dixon, representing the rail operators, were anticipating a discussion with the city council and CTA President Carter. Responding to Carter’s apparent lack of interest in the event, the union leaders decided to boycott the hearing.

I kicked off the public comment section of the hearing noting the conspicuous absence of the head of CTA: “I wonder where Dorval Carter is?” I asked.

The handful of CTA staffers who did appear at the hearing failed to explain why Carter wasn’t in attendance.

CTA CALLED UPON TO DO BETTER

Speaking on behalf of the Active Transportation Alliance and the Transportation Equity Network, during my statement I called for better cooperation between CTA and CDOT, and moving forward with a city-wide network of bus-only lanes.

In addition, I said Chicago needs “robust infrastructure of affordable housing, mental health services, and jobs so that Chicago’s problems don’t spill into CTA as they do now.”

I urged the CTA to explore creative solutions beyond policing that would involve substantial participation of other city agencies and community groups.

Aldermen asked numerous questions of the CTA team, as captured in the live Tweeting by Active Transportation Alliance during the hearing.

Chief Security Officer responds that each private security contractor is responsible for administering the training to their employees. @rodriguezfor22 asks how the training and efficacy is being evaluated.

.@J1Ramann Ald. Jeanette Taylor of 20th Ward is up next and continues to pile on disappointment that CTA Pres. Dorval Carter did not show for the hearing. She asks if CTA could proactively reach out before employment fairs and make sure they come to ALL neighborhoods.

Towards the end of the hearing, 47th Ward Alderman Matt Martin made a series of points surrounding the CTA’s faulty tracker system:

.@AldMattMartin follows up with a clarifying question about why do ghost buses and trains still happen? CIO Molly Poppe responds that they are hoping to be more dynamic in updating the fixed schedule to reflect reality. Ald. Martin asks what is the timeline for improving tracker.

.@AldMattMartin asks for a broad timeline and receives response of hopeful to see improvements within the year. The tool requires ongoing maintenance so CTA will continue improve upon it.

.@AldMattMartin notes how disappointing it is to not have a more concrete timeline to share with riders for accurate tracking due to the high profile nature of this concern.

We hope that CTA officials are paying attention to the concerns raised by aldermen and advocates during the hearing. A number of improvements are needed for the CTA to regain the trust of riders while making the system more efficient and welcoming.

Thank you to 35th Ward Alderman Carlos Rosa-Ramirez for calling for the hearing and to Chicago Jobs with Justice for bringing together the aldermen, transit unions, and community groups, including Active Trans.

See the full video archive of the hearing (W. Robert Schultz III comments appear at 43:00). You can also read his comments.