Chicago needs to get on board with dedicated bus lanes 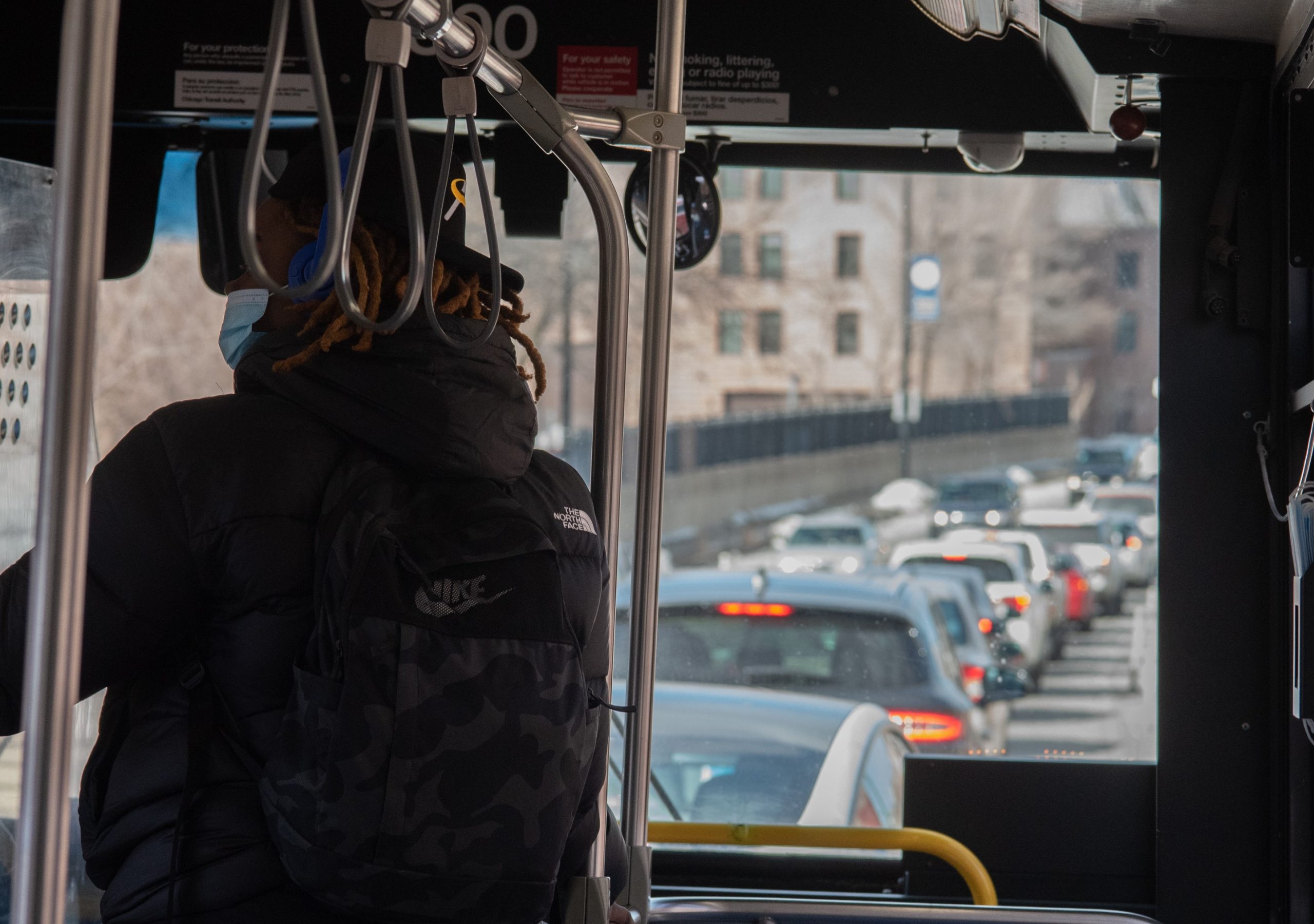 As the city of Chicago develops a plan for improving its bus service, let’s ensure they’re laying groundwork for what we desperately need: fast and reliable bus service

How often have you had this maddening experience?

You’re on a Chicago bus and running late for an appointment. Thanks to heavy traffic, the bus is creeping along from one backed up traffic light to the next.

Anxious and frustrated, you wonder: Should I reschedule the appointment? Should I get out and walk? Should I forever avoid taking the bus when I’m even a little pressed for time?

You might also ask yourself: Does it have to be this way?

Slow and unreliable buses are an enormous problem in Chicago, and poor service has led to plummeting ridership.

And, no, it doesn’t have to be this way. It could be a lot better and it wouldn’t cost much.

In April the Chicago Transit Authority (CTA) and Chicago Department of Transportation (CDOT) launched a planning process to improve the speed and reliability of bus service.

Late spring and early summer of 2022, the agencies solicited public feedback for creating the plan. More public feedback will be sought in fall 2022, and the city hopes to finalize the plan by the end of the year.

We need people like you to help shape this community-informed plan. We need to make sure the plan focuses on proven methods for speeding up bus service and increasing reliability: dedicated bus lanes and bus rapid transit.

We will share details about the next steps in the process as they become available.

Many cities around the nation are giving new life to their bus service by allocating space on the streets just for buses.

And when buses have their own dedicated lanes separate from cars, the impact has been nothing less than transformational. Buses suddenly become faster and more reliable, and more people want to use them — a dramatic makeover at minimal cost.

We’ve seen it around the country and around the world: When bus service is fast and reliable, people not only use it, they prefer it.

Greater bus speed and reliability: By keeping buses from getting caught in gridlock, dedicated bus lanes mean buses run on time and no longer get bunched up. No more staring at CTA’s Bus Tracker app with bewilderment and frustration. 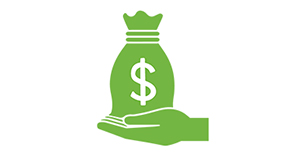 They’re cheap and easy: Compared to constructing new train routes or new roads, dedicated bus lanes require a tiny investment: gallons of red paint. An entire route can be installed in a matter of weeks. 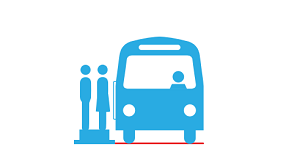 More people riding buses: It shouldn’t come as a surprise that more people will use the bus when they see buses whizzing by no longer stuck in traffic congestion. 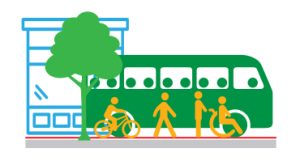 Safer, healthier streets: Streets with dedicated bus lanes are quieter, calmer, and safer, with no adverse effects on other nearby streets. Fewer cars on the road means everyone is breathing easier.

A ROUTE TO GREATER TRANSPORTATION EQUITY

Black people and Brown people in Chicago are more likely than white people to count on public transit — especially buses — as their primary way of getting around. As a result, investments in upgrading our bus system have a greater positive impact for communities of color. This is especially important in Chicago neighborhoods that have disproportionately bore the brunt of transportation and industrial pollution.

While the Chicago “el” is typically fast and reliable, housing costs near “el” stations have skyrocketed, making CTA trains less accessible for many lower-income people. The bus is often the only option people have.

Although people don’t often think about public transit as an anti-poverty tool, it can be just that when it creates better access to jobs, education, and daily needs.

While dedicated bus lanes by themselves can be transformational, they operate even better when they’re combined with other features that speed up bus service. Taken altogether, the following features are often referred to as Bus Rapid Transit or BRT.

Chicago tried to pursue this “gold standard” of  BRT once back in 2014 on Ashland Avenue. Sadly, the project stalled when some residents and business owners incorrectly claimed that the bus lanes would create havoc for drivers. After this failed attempt at BRT, leaders never tried again.

With the Biden Administration distributing millions of dollars to communities across the country to build BRT networks, now is the time to relaunch this planning.

CHICAGO HAS FALLEN BEHIND

Chicago currently has a mishmash of dedicated bus lanes totaling slightly more than 11 miles. Several of those miles comprise the Loop Link, which uses level boarding.

A few more miles of dedicated bus lanes were added during the pandemic along Chicago Avenue and 79th Street, but these lanes were never painted red and today the bus lane markings are barely visible.

Compared to New York and Los Angeles, Chicago is lagging far behind. While other cities have been laying the groundwork for a 21st Century bus system, Chicago has languished with hardly any progress.

More than half of CTA trips in Chicago are made by bus (and this number has increased during the pandemic), yet most of the conversation about improving public transit in Chicago revolves around creating better “el” service.

Long overshadowed by the “el,” buses are the unsung heroes of our transit system. Let’s give them the attention they deserve by making them fast and reliable.

AN UNPRECEDENTED CHANCE TO TRANSFORM OUR BUS SYSTEM

The plan that CTA and CDOT are currently developing provides a unique opportunity to ensure that our bus system achieves the speed and reliability it deserves. The way to do that is through dedicated bus lanes. Nibbling around the edges of better bus service won’t do it. We must ensure that the new plan takes a bold approach: 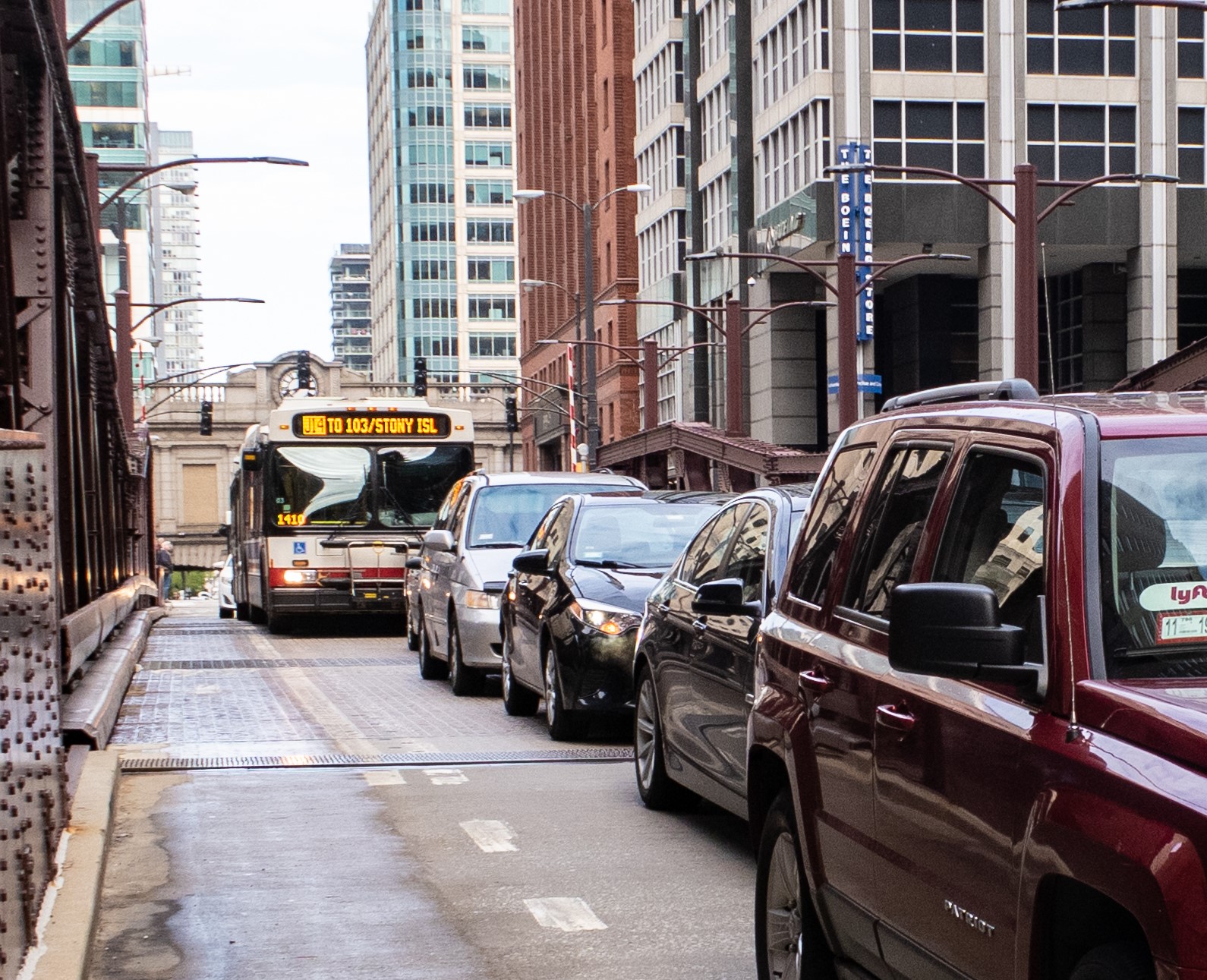 To ensure these goals are met, we need people like you to tell the city that dedicated bus lanes must be a priority. We need you and your community to keep the agencies’ feet to fire.

The future of our region and our transit system is begging for bold action that advances equity and sustainability. Let’s give our bus system the speed and reliability that Chicago residents deserve.

By Julia Gerasimenko and Ted Villaire; graphics by Anne Evans.