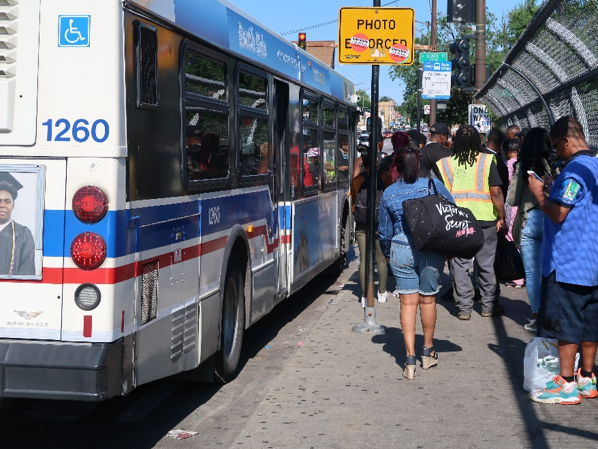 If you ride the bus in Chicago, you’ve probably had this experience: You’re boarding a bus while a line of people fish Ventra cards or loose change from the depths of their bags. As a result, the embarkation process feels like it’s moving at snail’s pace.

While this may sometimes seem like an unavoidable reality of riding the bus, the truth is there is a solution.

To that end, the CTA announced it will be piloting what’s called “all-door boarding” along the Jeffrey Jump (#J14) and University of Chicago Hospitals Express (#192) bus routes for a six-month period starting in June.

CTA will install Ventra card readers at the back door on 30 articulated buses to allow for all-door boarding.

We expect to see this pilot program pave the way for a system-wide change — especially considering the widespread success that other cities have encountered with similar efforts.

In 2012, San Francisco implemented all-door boarding across its system of buses and trolleys and saw a decrease in the time buses spent boarding people and an increase in bus speeds.

We commend CTA for taking this step — and are pleased that CTA is not adding enforcement personnel. Other systems like San Francisco implemented all-door boarding without increased fare enforcement and didn’t see any significant revenue impact.

Active Trans has been calling for interventions to speed up Chicago’s buses and make them more reliable — including bus only lanes, transit signal priority, and pre-paid and all-door boarding —  since we launched our Back on the Bus campaign in 2017.

Our Bus Friendly Streets Report Cards made the case that a lack of bus lanes and other bus priority features are contributing to the ridership drop. And the report cards make make clear what city leaders can do about it.

Mayor Lightfoot recently increased investment in Bus Priority Zones around Chicago and has plans to expand the zones further — thanks to the new Uber and Lyft fees. Steps like these are important tools in prioritizing bus service as an attractive and dependable option for everyone.

If you find yourself using the all-door boarding pilot, please share your feedback with CTA using their feedback form to help encourage future investment across the system.

Chicago residents: you can also sign a letter to Mayor Lightfoot and your alderman telling them you support bus service upgrades.