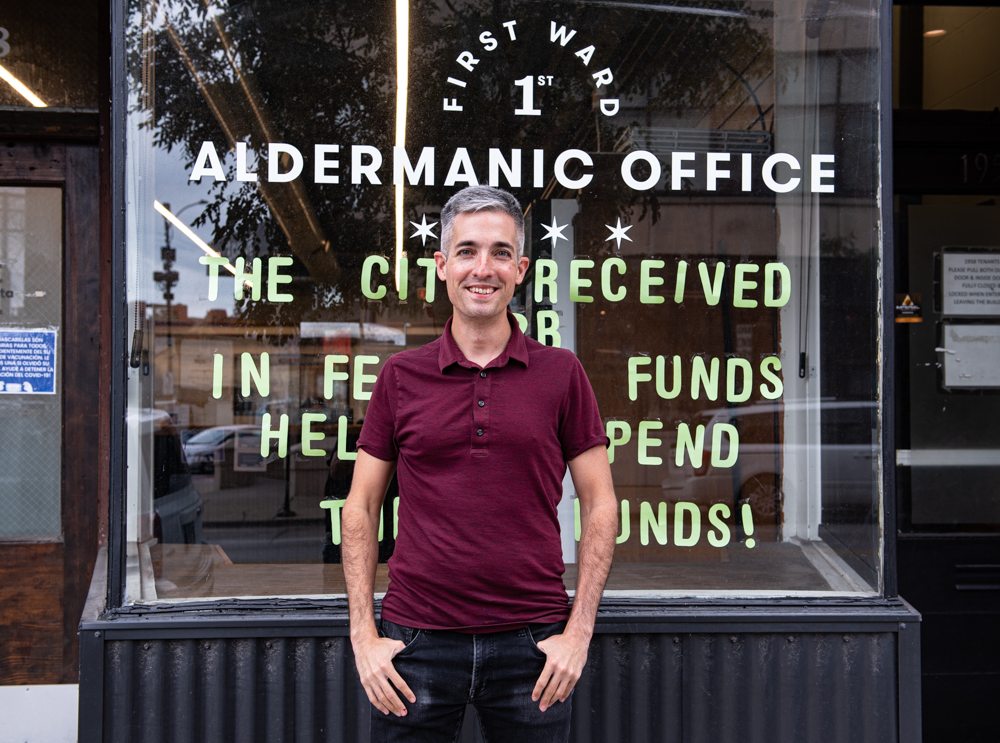 As alderman for Chicago’s 1st Ward, Daniel La Spata has only been on the job for two years. But in that short time, he has already made significant strides enhancing sustainable transportation on the Northwest Side.

The longtime community organizer and public policy expert has been pushing for infrastructure and legislation that improves walking, bicycling, and public transit opportunities that not only create safe and accessible sustainable transportation options, but also ultimately enhance the quality of life in the communities he represents.

“Non-automobile transportation needs to be safe, effective, sustainable, affordable, and comfortable. The problem is we neither have the infrastructure nor do we tend to make the investments to make that a priority,” La Spata says. “That’s a big part of the work for us. How do you build a neighborhood so that everything you would want to do you can reach by your feet or by bike or by public transportation? That’s a big goal for us — creating those kinds of walkable, livable, holistic neighborhoods.”

La Spata is already making progress toward that goal in his first term. He successfully advocated for protected bike lanes on Milwaukee Avenue between California and Western Avenues in Logan Square last year. The Chicago Department of Transportation swiftly installed the bike lanes as part of its Vision Zero plan, which aims to improve traffic safety by eliminating fatalities and serious injuries due to traffic crashes.

The new buffered lanes increase safety for cyclists by making them more visible along Milwaukee Avenue, a popular bike route that the Vision Zero plan identifies as a high-crash corridor for pedestrians and bicyclists.

In addition, La Spata recently collaborated with Active Trans and community leaders and residents for long overdue improvements at the dangerous intersection of Logan Boulevard and Western Avenue, where Kevin Clark and Tyler Fabeck were killed while riding their bikes. 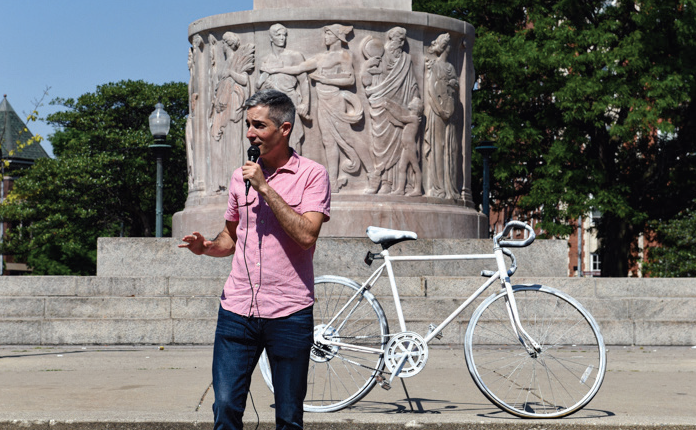 “I like the progress that we’re making in building that infrastructure and trying to move our micromobility infrastructure further down the continuum of protection and defined space for cyclists,” La Spata says. “The end goal is building out a true network of protected bike lanes across the city, and I would love to play a stronger role in making that happen.”

He credits Active Trans’ advocacy for helping to get these bicycling infrastructure improvements implemented quickly. “It was hearing from Active Trans’ members consistently and loudly that this is what they needed to see,” La Spata explains. “That gives us as elected officials the leverage and the power to push for urgency from these [city] departments.”

Over the past few years, the Blue Line has experienced increased ridership as more people move to Northwest Side neighborhoods like Logan Square and Wicker Park, resulting in overcrowded trains.

However, the new train cars will need more power than the current power and signal system can provide. La Spata is working with the CTA to build a new substation in Wicker Park that will house a high-voltage electrical system that can provide the extra power boost the new train cars need to increase their speed and frequency.

In addition, La Spata has successfully pushed for the CTA to upgrade the California station on the Blue Line so that it will be accessible to people with disabilities and in compliance with the Americans with Disabilities Act.

“This is going to be very exciting because the Blue Line in general is not an accessible route for the majority of people with disabilities,” he says.

Getting the bipartisan support needed to bring these types of sustainable transportation projects to fruition isn’t easy.

La Spata tries to overcome that resistance by taking his colleagues on walking, bicycling, and public transit trips in various wards so they can experience firsthand the problems plaguing these sustainable transportation modes that many residents depend on.

For example, he and CDOT Commissioner Gia Biagi have cycled around the wards to understand the types of infrastructure bicyclists need to feel safe. He recalls one cycling trip with Biagi when they rode around the intersection of Logan Boulevard and Western Avenue, where cyclists Falbeck and Clark were killed. 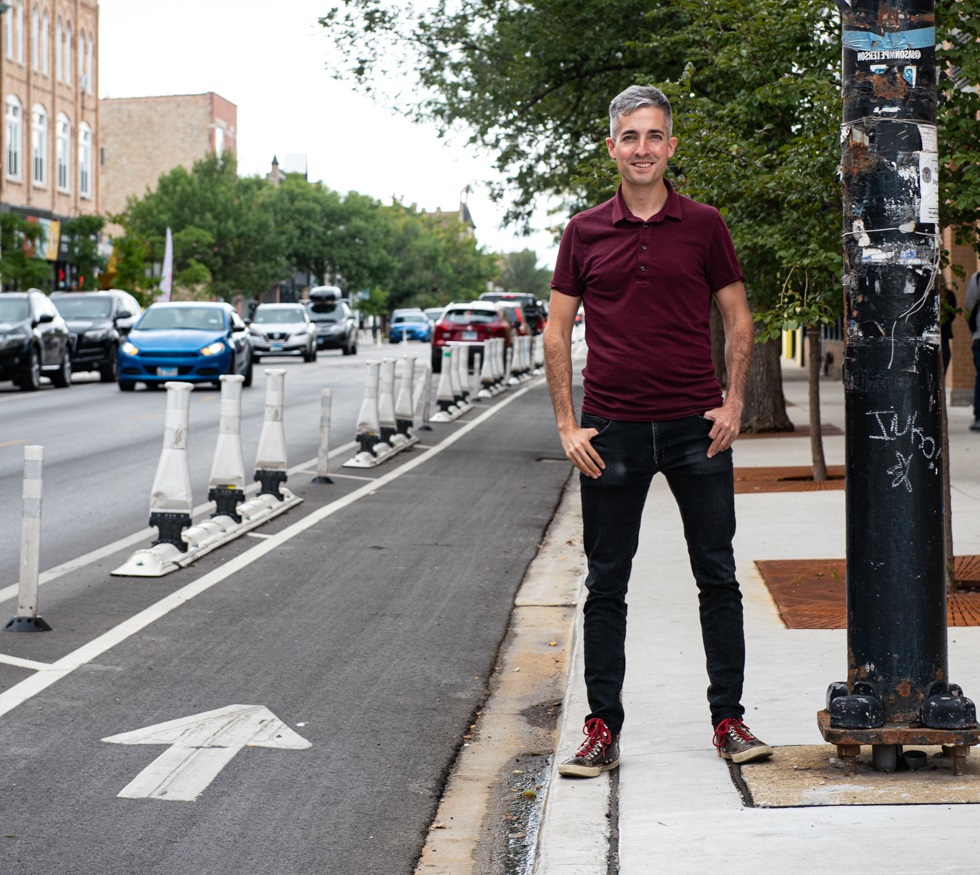 Biagi and La Spata were already uncomfortable biking in the area as cars whizzed by them, but they were also nearly hit by a car at the notoriously treacherous intersection. “I’m glad we’re both safe, but having the commissioner almost experience a crash there really helped instill the sense of urgency and the visceral sense of what we were dealing with there,” La Spata says.

“[This approach] shows people in a very visceral way what that experience is and that I’m not coming at this from any kind of a special interest perspective, but that these are real, tangible issues that people are dealing with,” he adds.

SHINING THE SPOTLIGHT ON SUSTAINABLE TRANSPORTATION

La Spata is committed to fighting for sustainable transportation not only because he recognizes that it is vital to creating healthy, thriving communities, but also because it plays an integral role in his day-to-day life.

An avid cyclist, La Spata primarily rides his bike for commuting and errands. When he’s not using his bike to get around town, he prefers to walk or take public transportation. In addition, he enjoys running and biking on the North Branch Trail for recreation.

“I just feel really free and alive and relaxed on my bike. I love it,” La Spata says. “I cannot imagine a world in which I was just sitting behind a wheel of a car when I have a bike as a viable alternative. There’s nothing like it. There’s nothing better.”

Given his affinity for sustainable transportation, La Spata plans to continue making walking, bicycling, and public transit projects a high priority during his first term as alderman.

To help get these projects enacted, he looks forward to furthering his collaboration with Active Trans, citing the organization’s advocacy know-how and sustainable transportation expertise.

“Active Trans has a clarity of purpose and a willingness to fight for [sustainable transportation],” he says. “Active Trans is an organization that is not afraid to exercise power, and I really appreciate that.”

“They do not allow aldermen to rest on the laurels of their past achievements,” he adds. “They’re always pushing us forward, which is great.”