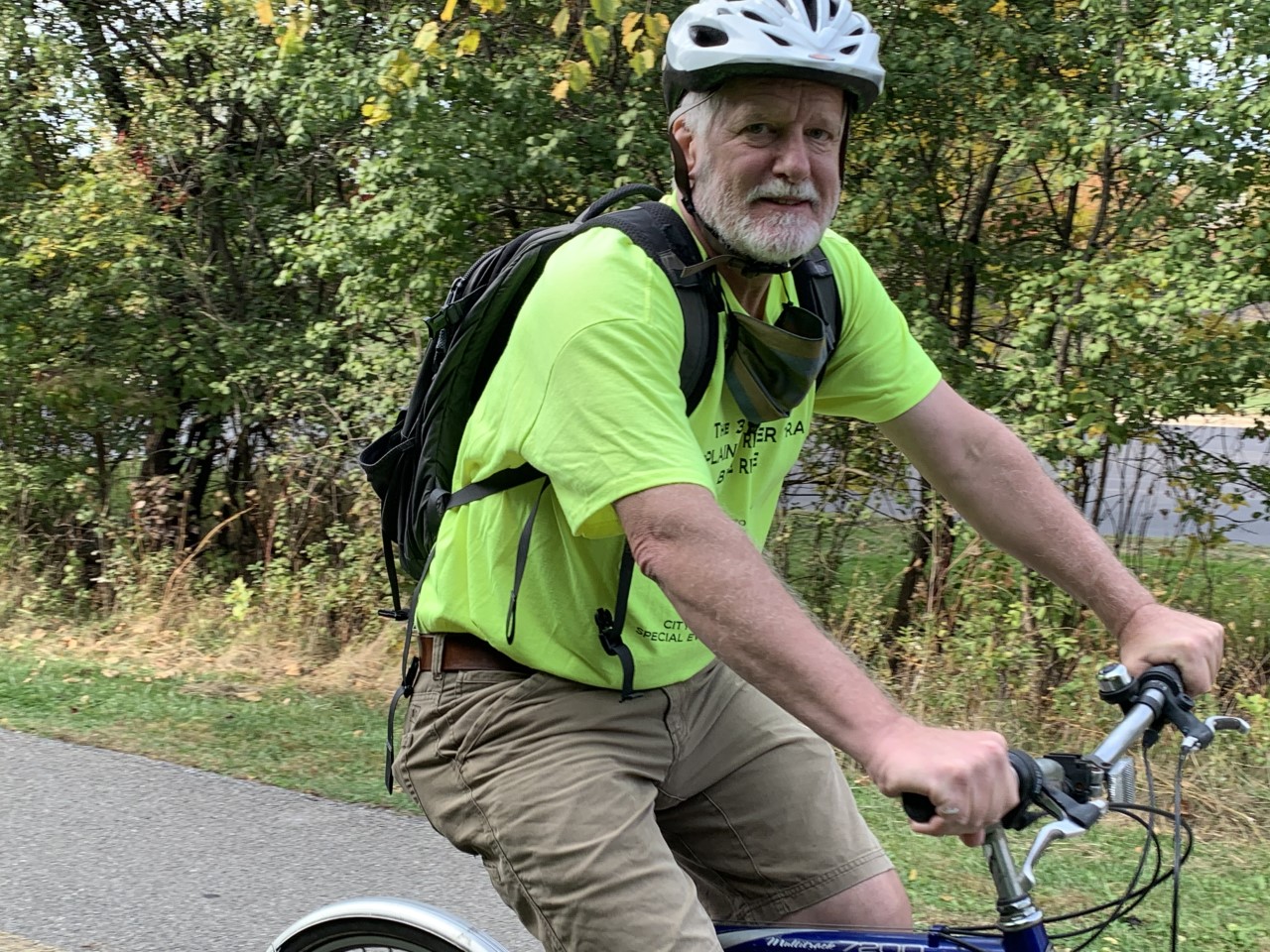 For his outstanding advocacy work over the years, Sinkler and two other local advocates — Romina Castillo and Pha’Tal Perkins — will be receiving Advocate of the Year awards at the Active Trans Annual Meeting on December 2. You’re welcome to join this online event as we celebrate the great work these individuals are doing in their communities.

Founded in 2013, the Des Plaines Bike and Pedestrian Advisory Committee engages in advocacy, education, and outreach to improve the walking and biking environment in Des Plaines. Both Sinkler and Active Trans played instrumental roles in establishing the organization. In 2011, Des Plaines hired Active Trans to develop a pedestrian and bicycle plan for the city. One of the recommendations in the plan was for the city to create a bike and pedestrian commission.

“That was never acted on. And I had been eager to be involved in that if they were going to do such a thing,” says Sinkler, who recently retired as a scientist for the oil and gas industry. “And so, rather than pursue something which would be for an official city organization, I got together with a bunch of other people who were interested in doing more for bikes and pedestrians in Des Plaines, and we started our own nonprofit, which was the Des Plaines Bike and Pedestrian Advisory Committee.”

“A lot of times to get from A to B, it’s hard to avoid the arterial streets” while biking, he says. “And so, making safe ways to get around, especially while avoiding arterials, is where creative thinking on the part of suburban bike advocates is really needed.”

Thanks to the work of DPBPAC and others, the city is slowly becoming more bicycle and pedestrian friendly. However, like most suburban communities, Des Plaines was designed primarily to accommodate cars. Therefore, most residents reflexively use their cars, even for short trips, according to Sinkler.

THE POWER OF COLLABORATION

To encourage Des Plaines residents to take up biking and walking as an alternative to driving, Sinkler and other members of the DPBPAC have been collaborating with the Des Plaines city council and other governmental agencies on several infrastructure projects that create safe passages for these sustainable forms of transportation.

For example, Sinkler is particularly proud of the progress the DPBPAC has made to enhance bicycle and pedestrian safety at the underpass of the Northwest Highway S-curve in Des Plaines. The highway runs under a timber railroad bridge, where two major rail lines cross. The resultin 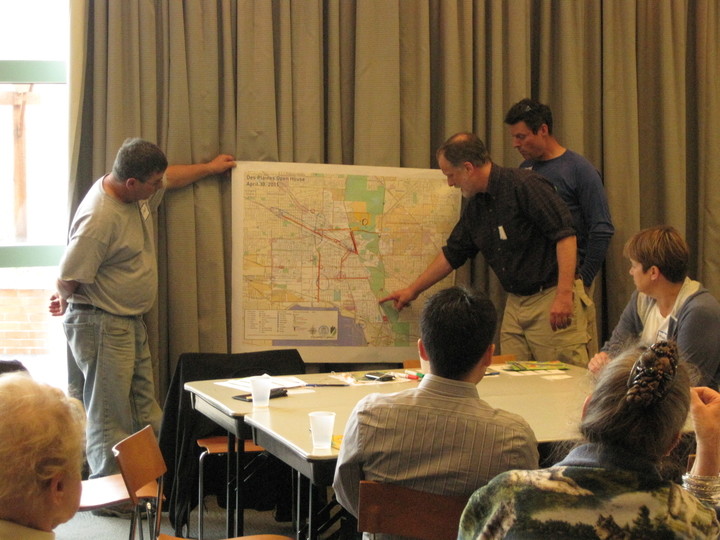 g curvature of the roadway under the bridge has created limited shoulder space for people walking and biking, putting them in danger as cars whiz by.

Over the last few years, the DPBPAC has been working with the Des Plaines city council and engineering department to create a pedestrian and bicycle path under the railroad bridge crossing that would run along the Northwest Highway from Seegers Road to Western Avenue. The path would allow for safe pedestrian and bicycle travel between downtown Des Plaines and areas west of the city, providing access to condominiums, schools, businesses, and recreation.

In addition, the path would be part of the 20-mile Northwest Highway Regional Bicycle Corridor, which will connect six suburban transit-oriented downtown districts with Chicago’s bike network. Thanks in part to the DPBPAC advocating for the S-curve path, the city council has moved the project forward with the completion of a feasibility study and phase 1 engineering currently underway, according to Sinkler.

“Our consistent, steady pressure and advocacy for the S-curve project will have a huge impact on this community,” he says. “This is something that has taken years and will probably take more years to complete. But when that gets done, it will change people’s v iew of the city and just open up so many opportunities.”

Because the members of the DPBPAC are volunteers that don’t have professional advocacy and urban planning experience, the committee often turns to Active Trans for resources and advice to get these types of complex infrastructure projects off the ground and maintain momentum for completion.

For example, DPBPAC helped Active Trans develop a questionnaire to determine the problematic access points along the Des Plaines River Trail and create a regional outreach plan, which included connecting DPBPAC with other biking and pedestrian nonprofits in the suburbs. That collaboration and public input was crucial in gaining buy-in from the Illinois Department of Transportation and other government agencies, according to Sinkler.

With these infrastructure projects in progress, Sinkler wants Des Plaines residents to instinctively turn to cycling and walking for commuting, errands, and recreation, rather than hopping in their cars, so they can reap the benefits of these sustainable modes of transportation as he has. An avid cyclist since his teens, Sinkler regularly commuted to work by bike or walking prior to his retirement. You can still find him cruising around Des Plaines on two wheels for errands and recreation.

“It’s the perfect confluence of many things that I care about,” he says. “You’ve got exercise. You’ve got the practical side of meeting your transportation needs. It’s low impact. And I’m very environmentally conscious, including about the climate. All of those things are served really well by increasing your use of the bicycle.”

If you’re interested in becoming a sustainable transportation advocate for your suburban community, consider getting involved with Bike Walk Everytown, Active Trans’ suburban advocacy program. The program will help you develop the skills and access the resources needed to strengthen biking and walking in your community.

Top photo of Sinkler courtesy  of him. Bottom photo shows Sinkler pointing to a map during an open house event held by Active Trans while developing the Des Plaines Bike Plan in 2011.