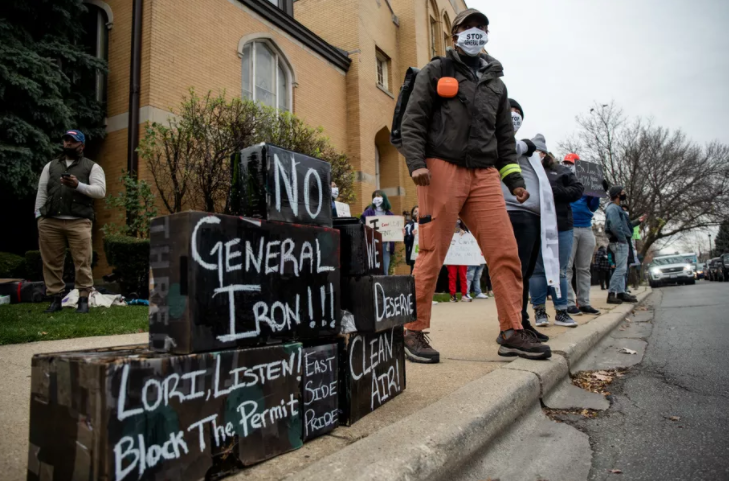 Active Trans stands in solidarity with the hunger strikers and Southeast Side residents who are fighting to get Mayor Lightfoot and Public Health Commissioner Arwady to deny the final permit to General Iron, a car crushing and metal recycling facility.

The facility, previously located in Lincoln Park, has a well-documented history of causing health issues in local residents due to the release of particles that cause lung and heart problems.

Looking at the 2020 air quality and health index map produced by the Chicago Department of Public Health, it is clear that the Southeast Side of Chicago shoulders a high burden for health and environmental impacts.

Air quality plays a major role in people’s ability to safely walk and bike and is an integral part of fulfilling our mission to support healthy, sustainable, and equitable communities through walking, biking, and transit.

Environmental justice is also inextricable from mobility justice, and decades of industries dumping harmful toxins in the soil, air, and waterways has created disparate health outcomes in the majority Latinx Southeast Side community. Therefore, we as an organization cannot stay silent.

George Washington High School is located a half mile away from where the facility is being developed. We cannot expect the school community to walk, bike, or take transit to school if the air is not safe to breathe.

City departments should be committed to environmental justice with the goals of improving the health, environment, and safety of students and residents. Approving General Iron’s relocation is a step backwards to ensuring a healthy future in the Southeast Side.

The Chicago Department of Public Health will have to grant approval before the facility can begin operating from the new location on the Southeast Side, and this hunger strike is a strategy of last resort for Southeast Side residents.

We have long heard about air quality and pollution as a barrier to residents walking, biking, and accessing public transit on the Southeast Side.

For several years we have been organizing to create safer conditions for people walking and biking between Pullman, Riverdale, South Deering, Hegewisch, and South Chicago and building connections to Big Marsh Park. In 2019 we worked with local residents and advocates to organize a tour for elected officials and agency leaders to shine a light on the vast need for safer transportation conditions in the area.

They have been organized and making it clear that what the Southeast Side needs is more environmental remediation, safer access to green space like Big Marsh Park, and to center the voices of its residents.

Not only is this process an example of environmental racism in action, this is also an example of inequitable and top-down development and planning. Our staff was recently involved in the Racial Equity Impact Assessment process related to the Lincoln Yards and 78 development and TIF funding structures. The assessment process highlighted how TIF funding structures support those developments and extract resources from communities that in turn do not end up benefiting from the developments.

The REIA process is an example of how the city should consider development proposals and center the needs of the most impacted, while weighing who benefits and who is burdened.

The Southeast Side already suffers from structural racism in the form of pollution that’s occurred over many years, local industry emitting toxins, and poor transportation access from limited and unreliable bus service. This part of the city also lacks infrastructure that would make it a safe environment to walk and bike.

People in these communities are still contending with top-down development processes even though they have been building power and organizing against toxic industry for decades. The fact that there are bikeways along Superfund sites in a primarily Brown and Black part of Chicago should be a glaring concern for anyone who cares about the health of those residents.

Public engagement and environmental remediation must be considerations during any development process. We call upon Mayor Lightfoot and Public Health Commissioner Arwady to listen to community members and deny the permit to Southside Recycling.

Here are some ways to support the hunger strikers and Southeast Side residents fighting against the permit:

The transportation committee in the Illinois State House is considering a bill that would make roads safer for vulnerable users, and we need your... Learn More