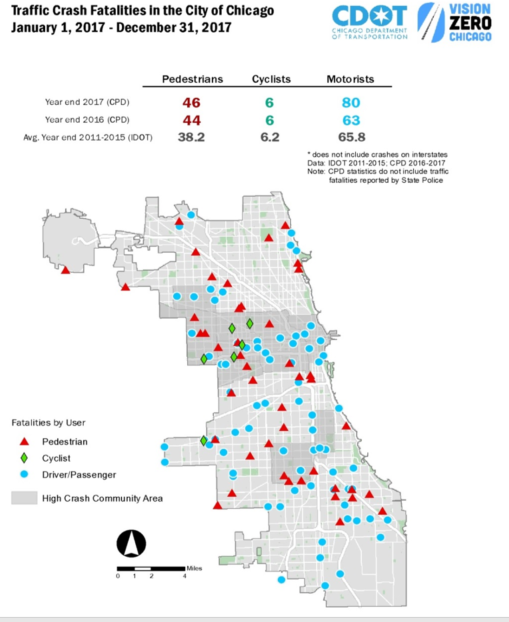 At the most recent Mayor’s Pedestrian Advisory Council (MPAC) meeting, the Chicago Department of Transportation (CDOT) provided a sobering overview of all the traffic fatalities in Chicago from 2017.

Through surveys and in public meetings, West Siders shared that they wanted to see education events and changes to street design as ways to improve traffic safety.

The final round of Vision Zero West Side outreach will culminate in an open-streets style community event to increase awareness and a small-scale rapid delivery project to implement low-cost, quick fixes to “high crash corridors.”

2018 will also see the first compliance date for the truck side guard rail ordinance on July 1st. This ordinance is the first policy win for the Vision Zero campaign, but Active Trans continues to advocate for a Vision Zero fund to provide additional resources for capital projects on high crash corridors, in addition to Vision Zero education and enforcement activities.

The Vision Zero Action Plan also called for the initiation of a multi-departmental review process for every fatal crash. To that end and following the implementation of Electronic Crash Reporting, CDOT and the Mayor’s office have been working with Department of Innovation and Technology, Chicago Police Department, Illinois Department of Transportation and Chicago Department of Public Health to make all crash data publicly available through the city’s open data portal. This will allow for direct access by the public to fields within Chicago Police Department’s crash records. This also eliminates the two-year delay on crash reporting.

The meeting ended with public comments, including a plea for attention to the intersection of Jackson Avenue and Lakeshore Drive with regards to pedestrian safety and an inquiry about the WBEZ story highlighting the disparities in snow removal tickets. A CDOT spokesperson responded that there was a larger discrepancy between tickets issued by the Chicago Police Department and the tickets issued by the Chicago Department of Transportation and the Department for Streets and Sanitation.

The Mayor’s Pedestrian Advisory Council (MPAC), which is open to the public, is hosted by the Chicago Department of Transportation and takes place quarterly at city hall. The meetings are a great way to stay informed about CDOT projects and hear about initiatives to improve conditions for people walking around the city.

The next Mayor’s Pedestrian Advisory Council meeting will be on Wednesday, May 9. Email lcrabtree@completestreetschicago.org to get notifications for upcoming MPAC meetings.