The analyzed data was pulled using CTA’s Bus Tracker API for the month of May 2018. All trips were analyzed between 6 a.m. and 6 p.m. The month of May was selected since it presents few holidays and usually offers mild weather, which minimizes service disruptions. Speed, bus bunching and typical wait time were the metrics used to analyze speed and reliability of bus service in Chicago.

We have strived to fairly grade CTA buses by holding them accountable to a high but achievable standard that acknowledges the constraints on bus operations in a dense, metropolitan city. In other words, we are not grading on a curve. Active Trans’ approach to defining the above grade thresholds is as follows:

We have defined grade thresholds in relation to these goals and to the current statistical distribution of performance recognizing that, no matter what, some wards and routes will perform better than others. For speed and bunching, we used increments of two to define the grading thresholds, but there were smaller deviations for additional expected wait time. 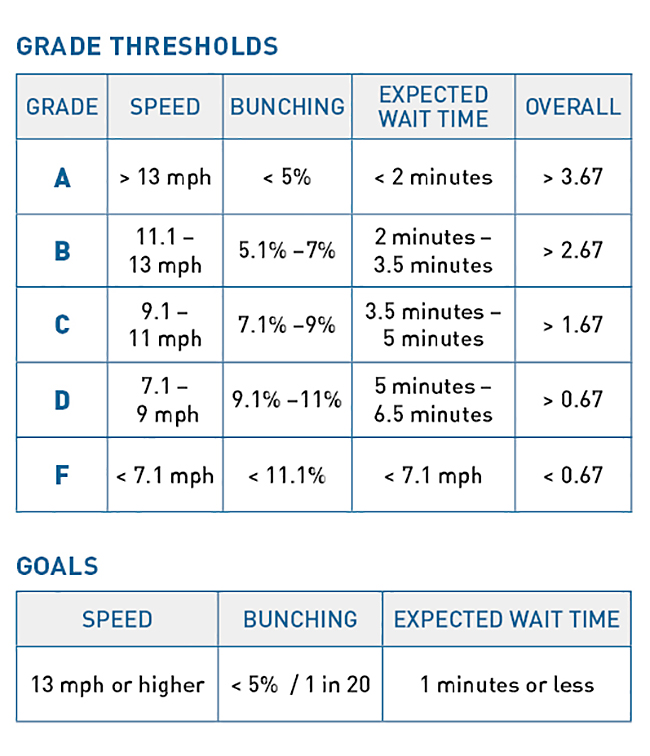 Chicago’s Bus Friendly Streets Report Cards performance metrics are available and documented as part of a public API and related analysis code, both of which are available for anyone to review, use and adapt on GitHub. Active Trans owes special thanks to TransitCenter for providing funding and support throughout the production of the report cards. In addition, special thanks goes to Neil Freeman for producing the code and analysis. Thanks to Active Trans Bus Advocacy Intern Esther Ramsay for creating the maps and analyzing the data.  We would also like to thank Leah Mooney, Jennifer Henry and Emily Drexler of the Chicago Transit Authority (CTA) and Luann Hamilton, Jeffrey Sriver and Jason Biernat of the Chicago Department of Transportation (CDOT) for providing their feedback on draft versions of the report cards. And last but not least, thanks to Michael DiGioia and others at Media Made Great who created the interactive map and the online presentation of the report card data.

Email us with questions about the methodology: julia@activetrans.org.