Home / Blog / Your Clear the Way photos are making an impact

Your Clear the Way photos are making an impact 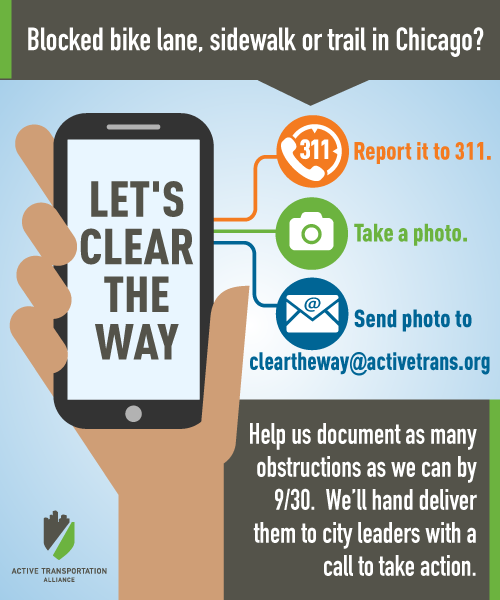 After just a few weeks, the amazing response to our Clear the Way campaign is already making an impact. The campaign was launched in response to the problem of illegal parking, dangerous construction, and crumbling pavement in our bike lanes and sidewalks. If you encounter a blockage or unsafe condition in the bike lane or sidewalk, we encourage you to first call 311 and report it. Then, take a picture and send it to cleartheway@activetrans.org to have your experience included in our report to the city.

Because of your reporting, the city has added a new option to the 311 hotline to make reporting bike lane blockages quicker and easier — all the more reason to call in! In addition, the Chicago Tribune added its voice to yours by publishing an article highlighting the problem of bike lane obstruction on Milwaukee Avenue.

Another step towards safer streets was accomplished through the Mayor’s announcement about a roadmap for eliminating all traffic deaths in the city of Chicago with a new Action Plan for the city’s participation in the worldwide Vision Zero effort. Read more about it on our blog.

Below are some more of the best submissions— 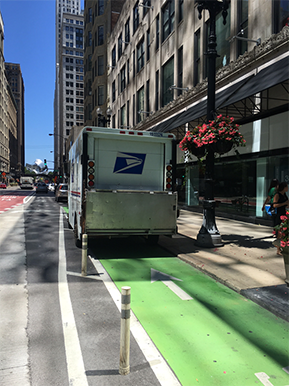 The United States Postal Service vehicles have been spotted frequently blocking bike lanes and crosswalks. No matter what type of car is stopped in the bike lane, the result is the same: bikers are forced to swerve dangerously into oncoming traffic. Please make sure to call 311 when vehicles parked in the bike lanes are making our streets more dangerous. 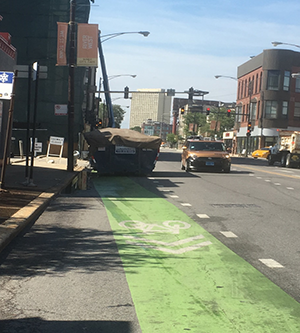 This photo shows a construction site making biking dangerous in the Milwaukee Ave. bike corridor. Obstructions in the bike lane don’t only come from dangerous drivers; construction projects have a role to play in following guidelines to make sure that conditions are safe for cyclists. More signage and bike lane diversions would make Milwaukee safer during this heavy construction period. 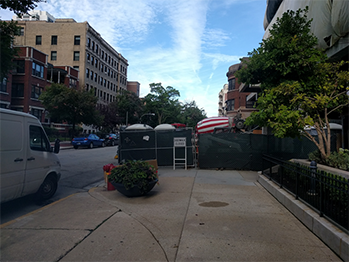 This sidewalk on Melrose is totally blocked by a construction site, forcing pedestrians to walk out into oncoming traffic. When construction extends into the sidewalk, there has to be a viable alternative provided for pedestrians. If you experience unsafe blockages while walking, call 311 and select the “No Construction Permit & Construction Violation” option.

Make sure to keep reporting bike lane blockages to 311, and sending in your photos to cleartheway@activetrans.org through the end of September. Your experiences have gotten the ball rolling on making our streets safer for everyone who uses them, now let’s keep pushing for more.

This post was authored by Advocacy Intern, Justin Dodd.