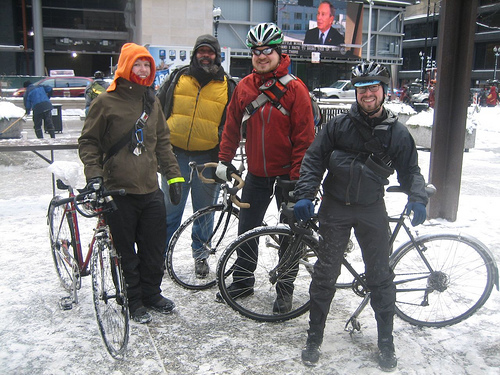 Hundreds of winter cyclists descended upon Daley Plaza Friday morning to celebrate Winter Bike to Work Day and the first ever Roll the Cold Bike Challenge.

Winter Bike to Work Day commemorates the coldest day in Chicago history — January 20, 1985 — when the temperature dropped to 27 degrees below zero.

Ronit Bezalel of The Chainlink was also there to capture the celebration. You can view her photos here.

Attendees mingled over warm coffee from Dark Matter, energizing electrolyte drinks from Nuun, cheesecake from Eli’s, various goodies from Clif Bar and free bike repair from Kozy’s Cyclery. FOX, NBC and CBS were there to report on the winter biking celebration.

MB Financial Bank Bike the Drive is the one time during the year that cyclists get to enjoy a sunrise over Lake Michigan and see iconic views of Chicago via a car-free Lake Shore Drive.

If you haven’t registered yet, you can receive a $7 early bird discount by signing up by noon on February 2, 2015. Want to save even more money? You can save an additional $2, for a total of $9 savings, if you stop by a Chicagoland MB Financial Bank location and grab a secret coupon code. And people who stop by MB Financial Bank will receive a deluxe CamelBak water bottle!

Last but not least, Michael Withers was annointed King of the 2015 Roll the Cold Bike Challenge for biking a whopping 267 miles during the week of January 17-23! Nice job Michael!