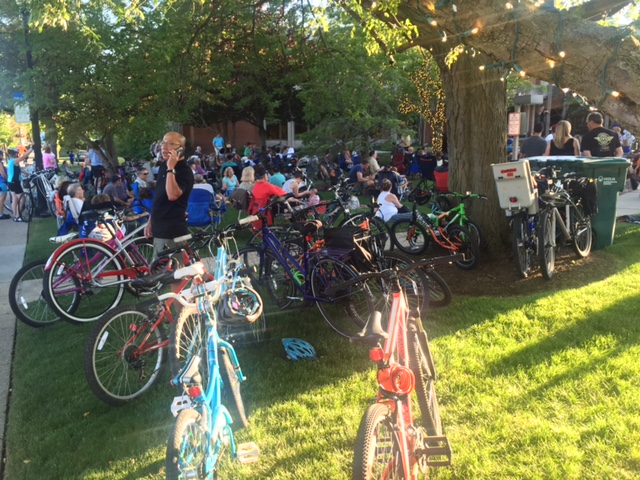 The Wilmette Citizens for Active Transportation (WCAT) hosted their first annual Roll and Stroll to Town event on Tuesday, June 21 in celebration of the summer solstice, the longest day of the year. The event featured good music, good food, and lots of bikes!

Piggy-backing on the already-scheduled Music on the Green series, hosted by the Village of Wilmette, WCAT encouraged community members to leave their cars at home and bike or walk instead.

Hundreds of community members attended, and many biked or walked to get to the village hall lawn in the center of downtown.

The Music on the Green event featured a free concert by the pop band Final Say. The many “rollers and strollers” also visited local restaurants and merchants near village hall for a pleasant evening in downtown Wilmette.

WCAT is a group of community members working to make biking, walking and public transit safer and more convenient in Wilmette.

To get involved in Wilmette Citizens for Active Transportation (WCAT), contact bikewilmette@gmail.com or Ken Obel at kenneth.obel@gmail.com.

People are invited to pedal or walk to the next Music on the Green event on July 19, featuring country band Mason Rivers.