Why removing the Kinzie bike lane is a bad idea 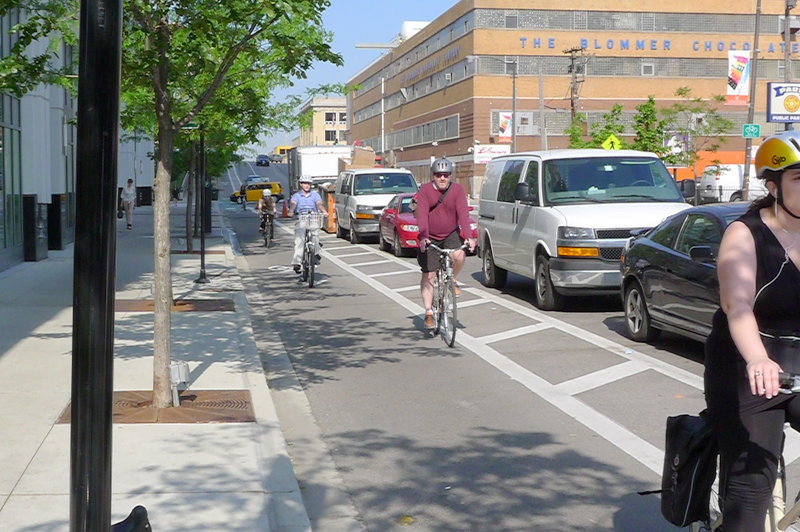 A bike network is only as strong as its weakest link, but a new proposal by 42nd Ward Alderman Brendan Reilly threatens to remove one of the most critical connections in Chicago’s growing network of protected bike lanes.

In an ordinance introduced in the Chicago City Council, Ald. Reilly is seeking to force the Chicago Department of Transportation to remove the Kinzie Street protected bike lane, located between Des Plaines and Wells Streets in the River North neighborhood.

If successful, the removal of the Kinzie protected bike lane would be a setback for Chicago, putting more people at risk of injury while doing nothing to alleviate congestion or move people more efficiently around downtown.

Tell your alderman to oppose the removal of the Kinzie protected bike lane.

In recent news coverage, the alderman argues that the bike lane needs to be removed due to concerns about safety and increased congestion during and after construction of the development at Wolf Point.

But the fact is that with or without a protected bike lane, people will continue to bike on Kinzie because this route provides one of the only lower-traffic connections to downtown over the river. That’s why the protected bike lane was put there in the first place.

Protected bike lanes are proven to reduce the risk of injury to people riding bikes by a whopping 89 percent. Removing the Kinzie protected bike lane would immediately put people at risk of preventable harm.

Concerns about the impact new development may have on local traffic and congestion similarly miss the mark. A study conducted on Kinzie after it was installed showed that despite a 55 percent increase in bike traffic, the project had little to no impact on car travel times. But more importantly, the notion that new development necessitates more car space in crowded downtown Chicago, rather than alternatives like protected bike lanes, is the kind of backwards thinking Active Trans and our supporters are working to change.

Employers and residents locate downtown because of the alternative transportation options the city center provides, not in spite of them.

Beyond the fact that stated concerns about safety and congestion just don’t hold much water, Chicago’s reputation as a forward thinking city of the future is also on the line.

In recent years, Chicago has enjoyed a lot of positive media attention due to the impressive progress the city has made encouraging cycling by building out its network of protected bike lanes and launching the Divvy bike share program.

In recognition of these strides, Bicycling Magazine just last year named our city the second best city for biking in the country. Mayor Emanuel has often cited the Kinzie protected bike lane as the kind of infrastructure improvement he sees as critical to luring new businesses to Chicago, particularly the well-paying tech and creative jobs we need to attract to strengthen our local economy and right our fiscal ship.

Removing the first protected bike lane in the city just four short years after it was installed will be a national embarrassment and set us back in our efforts to make our city more livable and economically vibrant. The only way to make our streets safer and less congested is to build more protected bike lanes like the one on Kinzie, while pushing for complementary transit and pedestrian improvements.

That’s why Active Trans is mobilizing our members and supporters to push back against Ald. Reilly’s proposal. We hope you will join us.