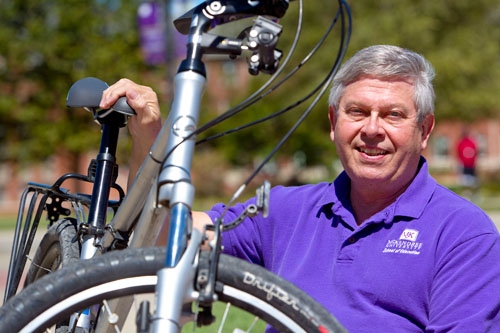 The following post is excerpted from George Fero’s recent testimony before the Illinois Senate Transportation Committee about House Bill 270, which eliminates the 20 percent local cost share for walking and biking infrastructure.

Fero serves as an alderman on the city council in Lebanon, a Southern Illinois town with about 4,500 residents. He also serves on the board of the statewide bike advocacy organization Ride Illinois and is vice-president of Gateway East Trails, his local walking and biking advocacy group.

The City of Lebanon, with a population of just under 5,000, is located at the eastern edge of metropolitan St. Louis, at the crossroads of US highway 50 and Illinois Route 4. Both highways are maintained by IDOT. We have four front doors to Lebanon, one from each direction.

From the west, traffic crosses over a wetland and a creek on U.S. Route 50, which is a 55 mph two-lane highway with no shoulders. This prevents safe bicycle and pedestrian traffic to or from shopping and employment opportunities in O’Fallon, just a couple of miles to the west. To the east US 50 becomes a 55 mph two-lane highway after crossing over another creek. To the north and south, IL-4 is a two lane-highway at 55 mph with no shoulders.

Several years ago, a study showed about 10,000 to 15,000 vehicles per day used these two highways. They share a one-mile segment in the city along what is our primary business district.  There are well over a hundred cyclists and many pedestrians who ride and walk within the city daily. However, Lebanon is an island unto itself at the eastern edge of metropolitan St Louis with no place for people biking and people walking to be able to safely travel to and from the city under their own power.

Recent improvements to these highways did not consider side paths, sidewalks, or bike lanes, because the City of Lebanon did not request them. We did not request them mostly because we could not afford the required match. With a $4 million annual budget, there is not much room to consider “extras” such as sidewalks and bike paths on state highways. There are many other infrastructure needs within the city that also need attention.

We have a new IGA supermarket in Lebanon, our only full-service supermarket, and a pharmacy that are both along IL-4. But they are very difficult to reach by foot since there are no sidewalks, and pedestrians on the east side of the highway need to cross a very busy highway with traffic lights one-half mile away to the north.

Whenever faced with a major project, such as highway or street improvement, the city can sometimes obtain grants but often lacks the resources to come up with the match. We’re forced to either borrow the funds or forego the opportunity.

For example, two months ago the city council, after sometimes contentious discussions spread over several meetings, approved spending funds from the next fiscal year budget to have a study conducted about infrastructure needs in the poorest part of town where many people of color live. This is for a small section in the southeast corner of the city that borders on IL-4.

The ensuing report is expected to lay out a plan to improve much needed upgrades such as water and sewer improvement, street paving, curbs, and sidewalks. Our goal is to be in a better position to attract business and residential development to that area.

We are confident that we can have an effective plan that will identify funding sources. But we are not sure we can implement that plan when we must use local resources to fund improvements along the state highways that are charged back to the city, even at just twenty percent.

There are a lot of small cities like Lebanon in Illinois who need help to be able to serve their people. One way you can do that is by eliminating the local match.

Please ask your senator to co-sponsor HB 270 and vote for it when it’s called on the floor.