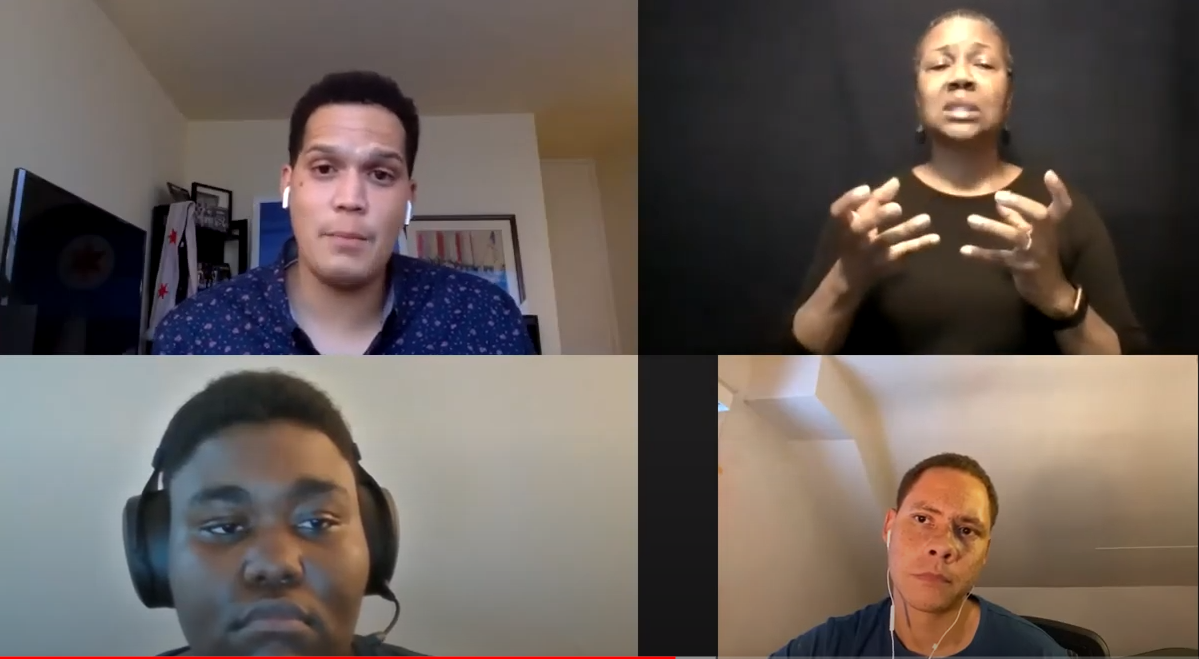 The Active Trans Bus Organizing Fellows recently sat down with State Senator Robert Peters of the 13th District and 47th Ward Alderman Matt Martin to talk about transit justice through times of a pandemic and a corresponding economic crisis.

Bus Organizing Fellows Rylen Clark and  Jamaine Alberto Gooding devised questions to ask the elected officials, and they posed questions that came from Chicago residents and audience members. Here’s part one of a summary of how the conversation went. Stay tuned for the second part. You can watch the full recording of the event here.

How do you see public transit as an element for social and economic justice in your district and/or in the state of Illinois?

Senator Peters: Many essential workers are living on the South Side of my district and go to work on the North Side of the district. When there are issues like a lack of protected bus lanes and Metra stations that need constant cleaning on the South Side and in South Shore, it makes getting to work more stressful.

It’s one thing to talk about worker’s justice, but it’s also necessary to talk about youth, and how they are potentially at risk from a lack of bike lanes and other types of transportation that would help them. Everyone has the right to good public transportation; it shouldn’t be a luxury.

Alderman Martin: Transit benefits not just those folks who are going to and from work, but folks who for whatever reason choose not or are unable to have a vehicle — from the elderly, youth, to those who are differently abled. When we invest in public transit, we’re investing in increased mobility for those individuals to live healthier and more dignified lives.

What was your reaction to the transit shutdown? Did it affect you and your constituents?

Senator Peters: I was absolutely furious with the shutdown. It was another example of a longstanding history of dividing the city up and using a crisis so in the name of supposedly protecting people.

It was a weird military tactic and a way to show residents how little control of their city they have. It turned downtown into a green zone similar to Baghdad that gated off an entire part of the city from its people. The shutdown abandoned people with barely 30 minutes of warning, and even less warning if you were unable to check your phone while working.

Alderman Martin: This was particularly frustrating for folks who depend on the public transportation system and are essential workers at places like grocery stores and are likely to have lower incomes.

Despite the current circumstances of the pandemic, the Active Transportation Alliance is urging the city to build 10 miles of dedicated bus lanes by the end of 2020, and another 20 miles by the end of 2021. We need bus lanes to keep bus trips as fast and reliable as possible and connect people to jobs, healthcare, food, and their family. Chicago only has about 5 miles of dedicated bus lanes while peer cities have dozens of miles, including some that have been rolled out during the pandemic. What barriers do you see for increasing the mileage of bus lanes in Chicago?

Alderman Martin: This is the sort of thing that makes sense on so many different fronts. The question isn’t whether we’re going to do it, it’s how we’re going to do it. We need to be not just concentrated primarily or exclusively on the delivery of core services, but also think about the context of broader policies. Until we address aldermanic prerogative in that context, as well as zoning context, that tight-fisted grip that folks want to have over their communities is in many ways perpetuating inequalities that have been with us for generations.

Ensuring that those who are disabled/differently-abled are able to get their voices heard is a key part of making our transit system more accessible. What do you think about making CTA bus service more accessible to people with disabilities?

Senator Peters: It needs to happen, not just bus service but getting to and from the train needs to be accessible, as well. When we speak about justice, we must include disability justice.

Alderman Martin: When talking about our bus system, we need to consider what it takes to get from the bench or shelter to the bus itself. We need to audit our bus stops to make sure that when someone gets on or off that they’re not, for example, having to do so in grass, dirt, mud, or ice.

It’s something I support, but an aldermanic office should not be asked to take the lead on that because there’s going to be too many situations where the alderman might not have the capacity to do those types of proactive audits. Or it could happen that we’re not hearing from residents who’ve identified that as a concern, and as a result it just doesn’t get done.

How do we protect long-time community members from the negative impacts of gentrification that comes with transportation infrastructure improvements?

Senator Peters: It’s generally up to the city when it comes to development, but at the state level, we can have some positive impact. When it comes to retro-regulation, affordable housing funding, policing, there’s a whole host of things that we can do with the city that prevent people getting pushed out. The problem with Chicago is that there are too many unwritten and assumed policies that contribute to people getting pushed out, and at the state level the role I play is to limit that.

Alderman Martin: We don’t have a lot of opportunities unfortunately with regard to “the L,” but we do with regard to improvements around buses and bikes. We need to be very sensitive to those displacement concerns. In addition to having a comprehensive transportation plan, we need a comprehensive affordable housing plan.

Take action now in support of 30 miles of bus lanes and masks for riders!  Please share this link with your networks: https://bit.ly/ChiTransitBudget