Home / Blog / Walking the South Branch of the Chicago River

Walking the South Branch of the Chicago River 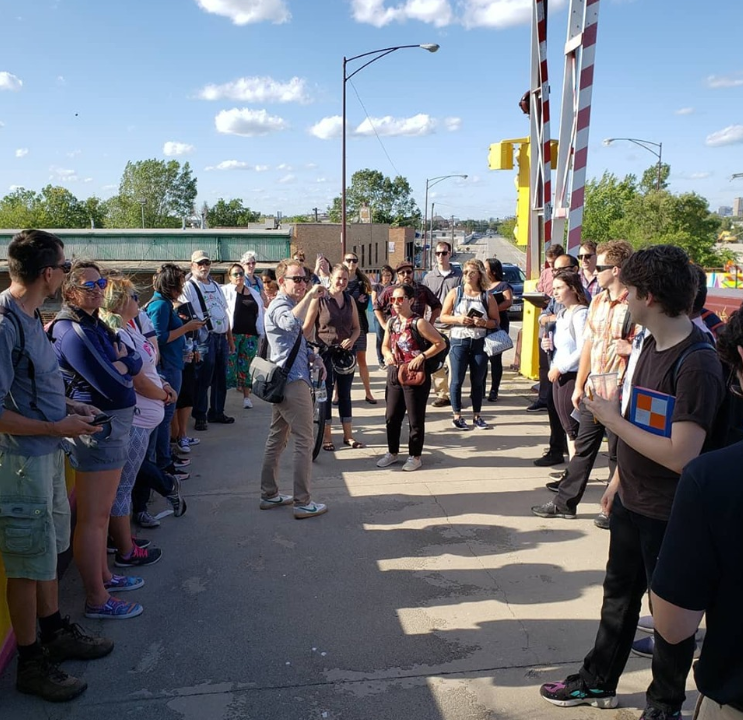 On a warm August afternoon, over 50 people joined the Mayor’s Pedestrian Advisory Council (MPAC) for a walk (pictured) from El Paseo Community Garden in Pilsen to the Eleanor Street Boathouse in Bridgeport.

Along the way, participants from Pilsen, Bridgeport and elsewhere got to experience part of the proposed El Paseo Trail and discuss site specific challenges and opportunities.

This roughly five-mile stretch from Ping Tom Park south to Western Ave is one of five remaining areas that need to be connected for the city to achieve its goal of a continuous Chicago River Trail.

She and neighborhood partners emphasized the importance of organizing a community council to ensure longtime residents are not displaced and any newly created transportation benefits are shared equally.

The conversation also highlighted the necessity of local stewardship, protecting the health and safety of existing trail users and preserving Pilsen’s rich artistic and cultural heritage.

As things stand, the only existing portion of the 4-mile El Paseo is between Cullerton and 21st, land managed by the garden. It’s seen an increase in development as well as more cyclists and visitors. Keeping this area safe for gardeners, walkers, and kids who use the garden and trail as their backyard is an important goal.

Then the group turned west on Cermak Road, where proposed trail conditions take a drastic turn as well. Cermak is a heavily industrial corridor – a stark contrast to the green space and residential environment we had experienced on Sangamon.

Along this stretch, Acevedo shared community concerns regarding hazardous air quality and spoke about ensuring on-street cyclists can safely share the corridor with trucks and other fast-moving vehicles. We saw firsthand the challenge of keeping trail users safe at complex intersections like Morgan, Canalport, and Cermak.

On Loomis, we diverged from the future El Paseo Trail and headed south toward the Eleanor Street Boathouse (designed by world renowned architects at Studio Gang Chicago at Park #571).

The divergence from the trail was a topic of discussion – community members talked about how we should encourage connections between points of interest in Pilsen and Bridgeport – places like the Eleanor Street Boathouse, which more Pilsen residents would visit if it was easier to cross the river.

A highlight of the tour was a stop at the beautiful new mural created in partnership with El Paseo Community Garden and the National Museum of Mexican Art.

The mural on the Loomis Street Bridge was part of the council initiative funded by the Chicago Community Trust’s Great Rivers Grant, and was completed through the Yollocali Arts Reach’s Public Art internship program with lead artist Chris Silva. The youth interns named the mural “Rainbow Bridge” (pictured below) for its colorful design and were asked to create motifs that reflect the history and culture of Pilsen and the river. 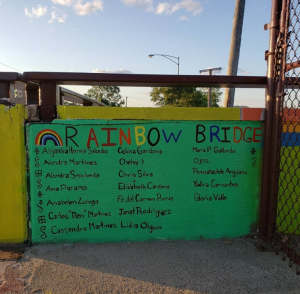 At our final stop, South Branch PAC provided highlights from its Framework Plan, which was developed through a year-long effort and input from hundreds of Chicagoans about what we’d like to see at the South Branch riverfront parks.

A major goal is connecting the three riverfront parks visible from the Eleanor Street Boathouse to each other and to the surrounding communities, linking people to jobs, shopping districts and recreational opportunities.

South Branch PAC is leading efforts to re-imagine the South Branch of the Chicago River as a connector of communities, rather than a dividing line, and Wednesday’s walk reinforced this message.

One thing was clear throughout this tour with the MPAC – communities need safe, equitable access to public health amenities like gardens, parks, and shared-use trails, and the city must develop those amenities in ways that respect and protect the existing neighborhoods and users. As we seek to connect, we have to be mindful of local nuances.

Attendee and community leader Teresa Fraga said it best: “This community has a right to go all the way to the river.” We couldn’t agree more.