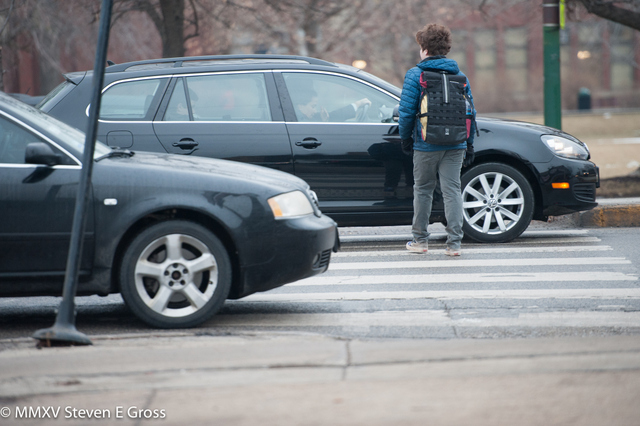 James Bausch had just bought an engagement ring for his girlfriend Amanda Annis when he biked by a crash scene.

Less than an hour later, he learned the crushing news: that his girlfriend had been hit and killed at that scene by a driver who ran a red light.

James told us that “nobody should have to go through what Mandy’s family and I went through in losing someone we loved to a preventable traffic crash.”

Tragedies like this are not inevitable, are not acceptable, and should be not be forgotten in the debate about traffic safety and red light cameras.

With this in mind, Active Trans was joined today by physicians, traffic safety experts and victims of traffic crashes in calling on Chicago’s elected leaders and candidates for elected office to support a comprehensive “Vision Zero” strategy to consistently reduce traffic injuries and eventually eliminate traffic fatalities.

In 2012, there were more than 77,000 reported traffic crashes in the city of Chicago that significantly injured nearly 21,000 people and killed 145 people — which is about 55 people per day injured or killed in Chicago traffic crashes.

In the Chicago suburbs, the number of injuries and fatalities are roughly one-and-a-half times the Chicago totals. Because crashes and injuries are often unreported or misreported, the actual numbers are likely higher.

Vision Zero is an international traffic safety movement guided by the principle that no loss of life on our streets is acceptable. Traffic crashes are not mere “accidents,” but preventable incidents that can be reduced and eliminated with systemic changes.

Photo enforcement is one tool that’s been used internationally and across the U.S. to advance Vision Zero goals along with public awareness and education programs, policy changes, and improvements to traffic engineering and street design.

We also called for the creation of an independent task force to help develop and evaluate a comprehensive Vision Zero action plan.

In the past year, the cities of New York, San Francisco and Seattle have all committed to Vision Zero and published detailed action plans that aim to reduce and ultimately eliminate traffic deaths and serious injuries, and several other cities are already working on similar plans.

The Chicago Department of Transportation has adopted a goal of reaching zero traffic fatalities by 2022. In pursuit of that goal, CDOT has been implementing various strategies that would contribute to a comprehensive plan.

We are committed to Vision Zero and hope you will join us by signing our petition to elected officials.

We cannot forget the tens of thousands of people like Amanda Annis who have been and will be injured and killed in traffic crashes unless we take traffic crashes seriously and implement a Vision Zero strategy.

Photo above courtesy of Steven Gross.