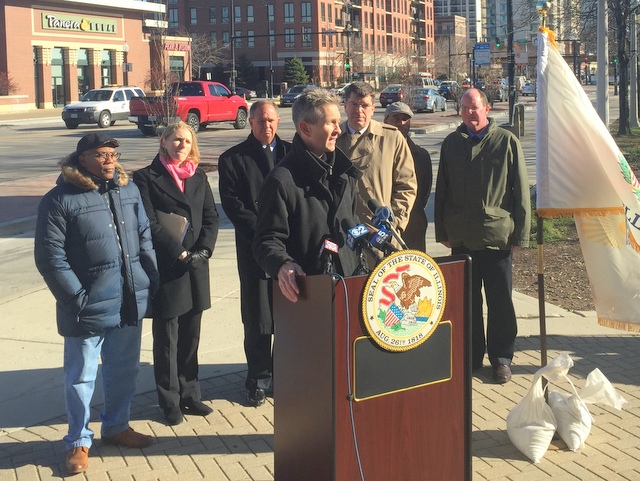 2015 was a banner year for people who bike, walk and ride transit in the Chicago region.

As you read through this list of our favorite active transportation stories of 2015, we hope you’ll consider supporting our work in 2016 so that we can continue fighting for better transportation options.

There’s much more work to be done to ensure everyone in the city and suburbs has access to a range of transportation options, but in 2015 these 10 stories gave us hope (listed in no particular order).

Responding to calls from Active Trans and other advocates, in 2011 Mayor Rahm Emanuel adopted a goal to build 100 miles of advanced bike lanes by 2015. This November, the Chicago Department of Transportation (CDOT) surpassed that goal, including the much-lauded Clybourn Ave. bike lanes, which are curb-separated and on a state route. (Photo shows Active Trans Executive Director Ron Burke speaking at the recent unveiling the Clybourn curb-protected bike lane.)

Chicago’s bike share program expanded by 176 stations and 1,760 bikes in 2015, for a total of 476 stations and 4,760 bikes to better serve more Chicago neighborhoods. In addition, more than 1,000 people have enrolled in the Divvy For Everyone program that provides $5 memberships to low income residents. And, Divvy is set to expand by 70 more stations next year in Chicago and, for the first time, the suburbs of Oak Park and Evanston.

When a proposal surfaced in the city council to remove the Kinzie bike lane – Chicago’s first protected bike lane – the bicycling community came out in force, signing more than 1,400 letters against the proposal to aldermen across the city. In September, CDOT officials confirmed the lane would not only stay but be improved.

In December CDOT and the Chicago Transit Authority (CTA) launched the city’s first bus rapid transit (BRT) corridor to prioritize and speed up bus travel east-west across the Loop, where about 75 percent of all people move by foot and bus. Loop Link features include red dedicated bus lanes, improved stations and new east-west protected bike lanes.

June was quite a month for urban trails in the Chicago region. After years of neighborhood advocacy, the 606 — also known as the Bloomingdale Trail — opened on the Northwest Side, connecting four diverse neighborhoods on a former elevated freight train right of way. That same day, the first segment of the 26-mile biking and walking path known as the Cal-Sag Trail opened in Chicago’s South Suburbs.

7. More than $200M in CMAQ funding goes to transit and bike projects

In October the Chicago Metropolitan Agency for Planning (CMAP) announced more than $200 million in funding for biking, walking and transit projects in the Chicago region. The funding comes from the federal Congestion Mitigation and Air Quality Program (CMAQ), which Active Trans and other advocates helped preserve when it was targeted for elimination locally a few years ago. For nearly 25 years, CMAQ has been the region’s largest source of funding for biking and walking and also a major source of transit funding.

In 2015 CTA showed signs it’s determined to speed up its local buses, which often bunch and get stuck in traffic. In December, the agency restored express bus service on Ashland and Western Ave. while adding traffic signal priority and optimizing stop spacing — all steps towards a bus rapid transit corridor on Ashland. The new service launched just days after the agency announced it will be launching pilot programs for bus routes in 2016 on Lincoln Ave. on the North Side and 31st St. on the Near South Side, responding to scores of neighborhood advocates.

In June, Active Trans awarded the Northern Indiana Commuter Transportation District (NICTD), which operates South Shore Line trains, the Broken Spoke Award for the dubious distinction of being the only commuter train line in the nation that does not allow passengers to bring bikes on trains. In August, NICTD finally changed its policy and launched a bikes on trains pilot program.

In November, the three transit agencies in the Chicago region launched a new mobile app that allows riders to purchase Metra tickets, track trains and buses, and manage their Ventra accounts. The app is a step forward for fare payment in the region, but it falls short of a universal payment system that the region needs. For example, many low-income riders and seniors don’t have smartphones to use the new app.

All this progress is a testament to the hard work of advocates across the region who believe the regional transportation network should continue to grow in a healthy, equitable and sustainable way.

Please consider supporting our work in 2016. And if you're not a member, please join. Ride on!