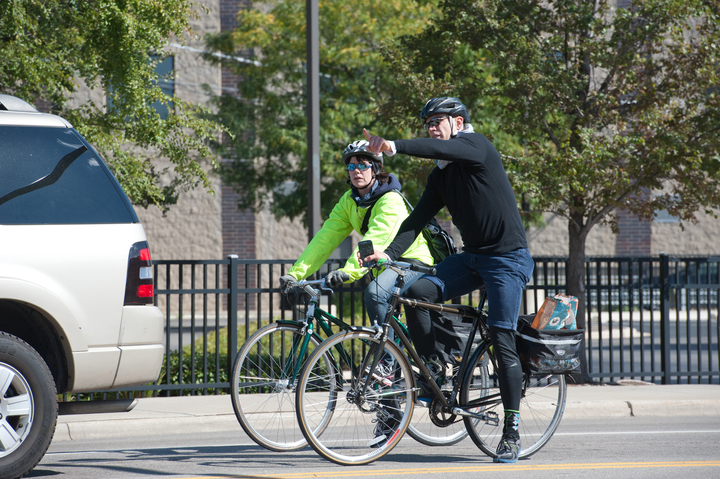 You encounter it regularly. A friend, co-worker or even a family member makes a disparaging remark that turns all cyclists into scofflaw adrenaline junkies with little concern for the safety of others. Or cycling gets painted as an antisocial activity that infringes on the basic rights of drivers. “Roads were built for cars!” is a common — and false — refrain.

Next time someone takes aim at cyclists, don’t just stand there steaming from the ears. Instead, take a moment to set the record straight. If we don’t politely insist that people get the facts right, these myths will continue to spread.

Let’s take a look at a few of these statements and see how they stand up to scrutiny.

This statement rests on several colossal fairytales — the biggest one being the idea that driver fees and gas taxes cover the building and maintenance of roads. In truth, driver fees and taxes cover roughly half of the cost of roads nationally. In Illinois, that percentage is slightly higher at 54.2 percent. The rest of the bill for automobile infrastructure is footed by general taxes like property taxes, income taxes and sales taxes.

This means that automobile infrastructure is subsidized by everyone, whether you drive or not.

Another faulty assumption with this line of thinking is that people who bike don’t own cars, and therefore don’t pay car user fees and taxes. Simply untrue. Most people who bike also pay automobile user fees because they also own cars.

An interesting wrinkle in this discussion is that biking causes a tiny fraction of the wear and tear on roads compared to cars. While people biking help pay for the costs of roads in various ways, their wear and tear on the roadway is a universe apart from cars. So instead of motorists subsidizing cycling, it’s actually the other way around — people who bike and people who drive very little are subsidizing motorists.

Bonus response: If “traffic nightmare” also means that protected bike lanes increase the danger of crashes on the street, that is utterly false, as well. Protected bike lanes make roads safer for everyone who uses them. When protected bike lanes are installed in New York City, crashes that cause injuries for drivers, pedestrians and cyclists typically drop by 40 percent and by more than 50 percent in some locations.

Retail success and protected bike lanes actually go together quite well. In Chicago, 22 percent of cyclists on Milwaukee Ave. claim they now stop at shops and business on the street more often due to the installation of the protected bike lane. With more than 5,000 people a day biking on Milwaukee, that translates into more than 1,000 potential customers.

Indeed, research has shown that protected bike lanes can be part of street redesigns that greatly boost retail performance. Customers who arrive at retail stores by bike spend the same amount per month as comparable people who arrive by car. They tend to make smaller purchases, but return more frequently. Studies in Toronto; New Zealand; Wales; Davis, California; and Portland, Oregon all bear this out.

After the construction of a protected bike lane on 9th Ave. in New York City, local businesses saw a 49 percent increase in retail sales. On other streets in the borough without protected bike lanes, the average was only 3 percent.

Subscribe to our monthly e-newsletter on our homepage and keep up with the latest news about cleaner, healthier transportation in Chicagoland.