The High Line shows the way

Among the many things I was excited to do during my trip to New York this Christmas was to walk New York City's High Line. 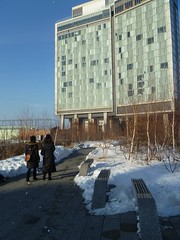 Thanks to the Blizzard of 2010, my initial attempt to visit the High Line was put on ice. Then came the news that our flight out on Tuesday was canceled and we'd need to rebook; suddenly I had an extra two days to experience as much as New York could throw at me.

The High Line is a former elevated rail line that has been converted into a pedestrian park—nay, a paradise. It runs north-south from Manhattan's Meat Packing District at 34th Street just west of 10th Avenue, through Chelsea and Greenwich Village, then crossing 10th at about 18th Street and ending at Gansvoort Street, near 12th Street. Open since June 2009, it is still under construction and accessible from 20th Street to the southern end.

The High Line is the benchmark that Chicago's own Friends of the Bloomingdale Trail (FBT) are now trying to achieve.  The Bloomingdale Trail, now in development, will be a 3-mile multi-use elevated park and trail, converted from a former rail line.  It will stretch east-west between Armitage and North Avenues from Central Park Avenue to Elston Avenue.

While the slow speed of development has been criticized, FBT points out on their website that the measured pace of the work will prevent a rushed and over-budget final product, citing Millennium Park as an example. 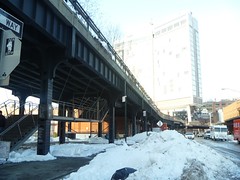 Such impatience is understandable, however, because in just 18 months New York's High Line is already paying dividends.

Mayor Bloomberg has made note of its influence on nearby development and there are now over 30 projects either planned or currently under construction.  Friends of the Bloomingdale Trail and its eager fans should take heart: The High Line took 10 years to open, beginning with the establishment of Friends of the High Line in 1999. Thoughtful progress can be plodding, but it does have rewards.

In addition to the neighborhood renaissance going on below along 10th Avenue, the High Line features or will soon feature many amenities of its own, including an outdoor theater, a lawn for sitting and displays of public art. 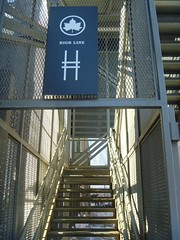 On my trip to New York last Wednesday, I finally had my chance to experience it. In just three flights of stairs I had a completely unique perspective of New York. I strolled down a pedestrian walkway and took in inspiring views of the Hudson River, 10th Avenue stretching on to the Upper West Side and the venerable Empire State Building.

Not only has the High Line inspired new growth in the surrounding neighborhood, it is undoubtedly having a positive impact on the values of the numerous properties that were built over the right-of-way well before the redevelopment began. An apartment or retail unit with direct access to such a unique pedestrian throughway—over 20 city blocks with no street crossings when complete, amid desirable neighborhoods in their own right—can only be one of the most sought after spaces in all of New York. Urban utopia.

The implications for Chicago's near northwest side are obvious. Logan Square, Humboldt and Garfield Parks are crisscrossed by wide and dangerous streets; red light violations and speeding are the bane of pedestrians and cyclists. Bucktown and Wicker Park are congested with cars to the point of bursting nightly and doorings are rampant. Yet, even now economic development is finding ways to persistently push west.  The Bloomingdale Trail will connect these neighborhoods and solve many of these problems in ways never before thought possible.