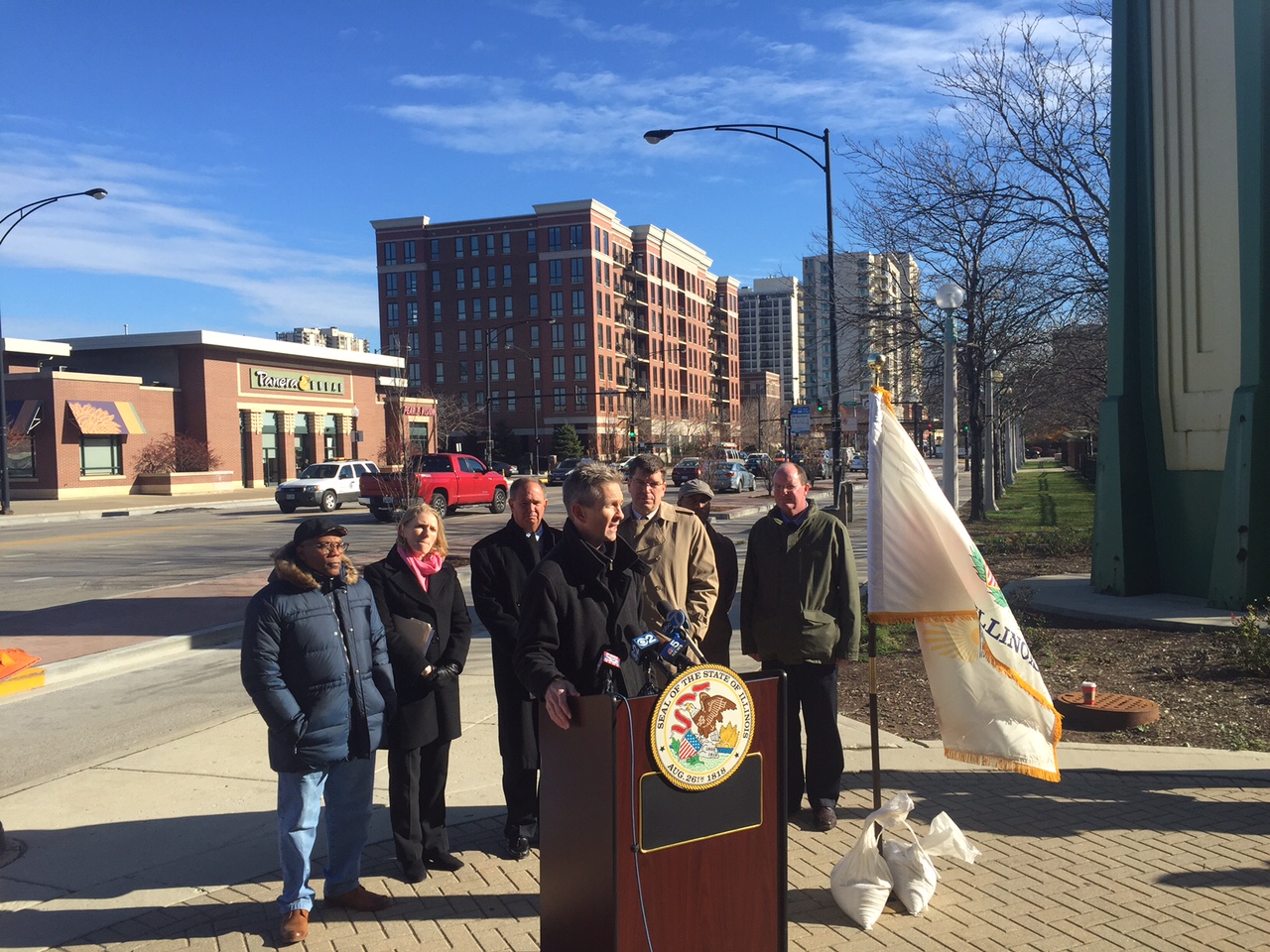 Today I applauded the Illinois Department of Transportation (IDOT) at a press conference officially unveiling the curb-separated bike lanes on parts of Clybourn Ave. and Division St. in Chicago.

Join us in extending our gratitude by signing our online thank you card to IDOT, the Chicago Department of Transportation, and Alderman Walter Burnett.

The new lanes on Clybourn Ave. are the first barrier-protected bike lanes in Illinois on a state-controlled road, and only the second installation of curb-separated bike lanes (rather than using plastic posts and/or parked cars) in Chicago.

It’s gratifying to see IDOT not only install protected bike lanes, but building what are arguably the best in Chicago so far. This is particularly remarkable given that IDOT hasn’t been especially friendly towards cycling in the past.

As detailed in our Bikeways for All report, curb-separated lanes are a big part of our vision for the next generation of bike lanes in Chicago.

Let’s recap how we got here:

2011: Prompted by Active Trans, Mayor Emanuel adopts a goal of building 100 miles of advanced bike lanes by 2015. The first protected bike lanes on Kinzie St. were installed during the Summer of 2011, mere weeks after the mayor took office.

2011: Chicago Department of Transportation (CDOT) installs barrier-protected bike lanes on Jackson Blvd. through Chicago’s West Side, but IDOT only allows buffered lanes on the state-controlled section of the road. IDOT cites safety concerns and claims it needs three years to study barrier-protected lanes.

2011-13: CDOT continues negotiations with the state; Active Trans works behind the scenes and we make our voice heard in the media, asking the state to change its policy.

May 2013: Bobby Cann, an active member of Chicago’s cycling community, is hit and killed by a car on Clybourn, north of Division.

Oct. 2013: Active Trans and Bobby’s friends and family work with 27th Ward Ald. Walter Burnett to name a portion of Clybourn in honor of Bobby; Burnett announces at the honorary street naming ceremony that IDOT will install a protected bike lane between North Ave. and Division St.

The untold story in this saga is that after collaborating to address IDOT’s needs and concerns, CDOT and IDOT staff largely agreed early on to install and test barrier-protected lanes on state routes, including Clybourn. As professional planners and engineers, they had a game plan.

Unfortunately, a high-level staffer in Gov. Quinn’s office overruled their strategy and banned the lanes on state routes while requiring “further study” — even though there was ample relevant research and experience already.

Based on what I learned, it appears this decision was more about politics than planning.

Active Trans and a coalition of businesses worked for months to get our message directly to the governor, hoping that he would overturn his staffer’s decision.

We tapped into the governor’s network and attempted to navigate around the staffer by way of donors and former employees.

These efforts, combined with a meeting that the businesses got with the staffer and other Quinn employees, along with the outrage over Bobby Cann’s death, contributed to the state’s change of heart.

Many others contributed as well to this important change in state policy and the truly fantastic curb-separated lanes on Clybourn that we celebrated today!

Join us in extending our gratitude by signing our online thank you card to IDOT, the Chicago Department of Transportation, and Alderman Walter Burnett.

Now, let’s get many more of these types of bike lanes all over Chicago and the suburbs so that people of all ages and abilities can ride anywhere comfortably on bikes.