David Powe is a self-professed transportation nerd — a moniker he wears proudly. After all, he has devoted his entire career to sustainable transportation planning and activism, shaping walking, biking, and public transit conditions in various cities across the United States to help create equitable, healthy, and thriving communities.

And now he brings that vast experience and deep expertise to Active Transportation Alliance as its new director of planning and technical assistance.

He traces his interest in urban planning and sustainable transportation to his college days at the University of Alabama when he took an urban environmental science class.

“I saw that transportation is part of everybody’s daily life. Everybody has to be moved somewhere. But I realized that our cities were built around the automobile. Our cities were being torn apart by interstates, wide roads, parking lots, garages,” Powe says. “And so, I saw that going into transportation planning, specifically transit planning, could make an impact on the world and provide people with an alternative to the car. I could help build a world where people could choose to walk or bike or take a train or a bus.”

That realization prompted Powe to change his major to geography from pre-med. After graduating with a bachelor’s degree from the University of Alabama, he pursued a master’s degree in transport and city planning from University College London in England.

Powe honed his outreach and community engagement skills in Raleigh, North Carolina, when he joined WakeUP Wake County as a campaign organizer. The nonprofit hired him to advocate for a sales tax referendum that would fund a $2.3 billion transit plan, including building a commuter rail line, enacting four bus rapid transit lines, and quadrupling bus service for the county.

Powe led this grassroots campaign by bringing together a coalition of local leaders and agencies, coordinating a massive social media campaign that reached hundreds of thousands of residents, and organizing about 100 events attended by more than 10,000 residents.

After the referendum successfully passed, Powe became a public involvement specialist at GoTriangle, which provides regional bus service to the Research Triangle region of North Carolina in Wake, Durham, and Orange Counties.

He worked with local communities and residents to gain their input and support to implement more than 40 capital projects, including the four bus rapid transit lines and commuter rail line he advocated for when he was a campaign organizer with WakeUP Wake County. 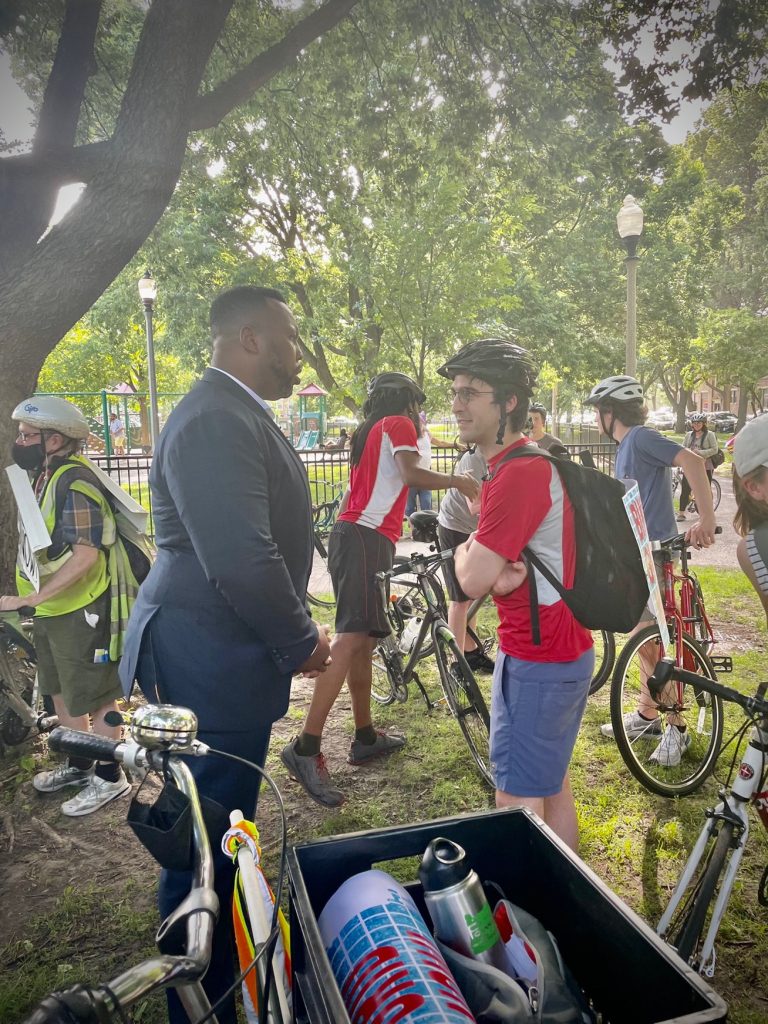 In Birmingham, Powe was tasked with overhauling the bus schedules to improve on-time performance and implementing new bus routes. To ensure the bus schedules and routes met the needs of both bus operators and riders, Powe collaborated with transit agency leaders, operators, and local residents.

In Utah, he redesigned bus schedules and improved conditions for bus operators in response to the COVID-19 pandemic. These experiences gave him insight as to how public transit is intrinsically entwined with equity and social justice.

“When you implement a new bus route or change a bus route, you have to do it as equitably and inclusively as possible because [marginalized and low-income] people depend on those buses as their main source of transportation,” Powe says.

“When I was changing up the bus systems [in Alabama], I quickly learned what privilege was and the position I was in,” he adds. “I could either include as many people in the process as possible, or I could be a closed door — as I often see transit agencies are — and shut everybody out of the process and implement what I think is good. I chose the former.”

THE JOURNEY TO ACTIVE TRANSPORTATION ALLIANCE

While Powe enjoyed working as a transit planner in Alabama and Utah, he wanted to live in a city that would allow him to ditch his car in favor of walking, bicycling and using public transit. That’s when he and his partner moved to Chicago.

Powe arrived in Chicago in 2021. He initially worked as a transportation program manager for the Village of Schaumburg, managing the operations of the village’s walking, biking, and public transit programs.

However, Powe says he couldn’t pass up the opportunity to work for Active Transportation Alliance when the position of director of planning and technical assistance became available early this year.

“This job is built for a transit nerd like me,” he says. “It marries my love for [transit] planning and my passion for advocacy.”

As director of planning and technical assistance for Active Trans, Powe provides expertise and advice to staff and stakeholders about best practices in active transportation policy, design, and process.

For example, he recently testified at the Chicago Metropolitan Agency for Planning’s transportation committee meetings about the agency’s updated list of regionally significant projects that are eligible for federal funding. The list includes projects that would add 158 lane miles to expressways and 141 miles of new lanes on arterial streets.

Powe testified that research shows that adding lanes to expressways and arterial streets does not relieve congestion. Instead, it encourages more people to drive cars and trucks, creating additional traffic and greenhouse gas emissions — a phenomenon known as induced demand.

Powe’s testimony is part of Active Transportation Alliance’s effort to have CMAP remove those road projects from its ON TO 2050 regional plan and support multimodal travel projects that prioritize road safety, environmental health, and equity.

He is currently helping to develop a pedestrian and bicycling plan for Batavia, a suburb west of Chicago.

“This is a great part of the work,” Powe says. “Being able to provide these suburban areas that are built around the car with ways to make their streets safer for everybody is something that I’m really passionate about.”

Powe knows firsthand about the benefits of sustainable transportation infrastructure. As a resident of Greektown, Powe is able to take advantage of the walking, biking, and public transit opportunities in that neighborhood.

He bikes to work as well as walks and uses public transit for errands and other essential activities, such as going to the grocery store.

But Powe also recognizes that metropolitan Chicago has a long way to go in creating a world-class sustainable transportation network that prioritizes people walking and biking and public transit users — especially on the West and South Sides of the city — over a car-centric city.

“[Sustainable transportation] opens up the doors to so many people because the barriers to entry for car ownership are too high for vulnerable populations and under-invested communities,” Powe explains. “If you can rely on safe, affordable public transportation, biking, and walking, that allows people to live a more mobile life — to get to grocery stores, healthcare, education, jobs, to see their families and friends. … Then you can build more equitable communities.”