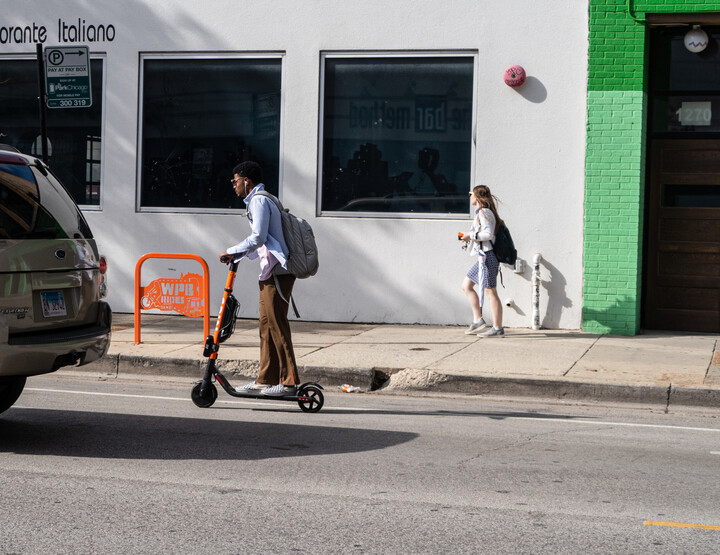 After two years of pilot programs, Chicago is well-positioned to create a long-term e-scooter sharing program that is focused on neighborhoods lacking transportation options.

The four-month long second e-scooter pilot program ended in mid-December. Bird, Lime, and Spin were the vendors, with a limit of 3,333 scooters per vendor. This was four times the number of scooters deployed in the 2019 pilot.

The structure of the 2020 program was largely consistent with the community-informed recommendations Active Trans issued after the initial pilot.

Service area: This year’s program expanded the service area to nearly the entire city. Scooters continued to be excluded from the downtown area and on trails such as the Lakefront trail and the Bloomingdale trail, which were  recommendations Active Trans made after the initial pilot. 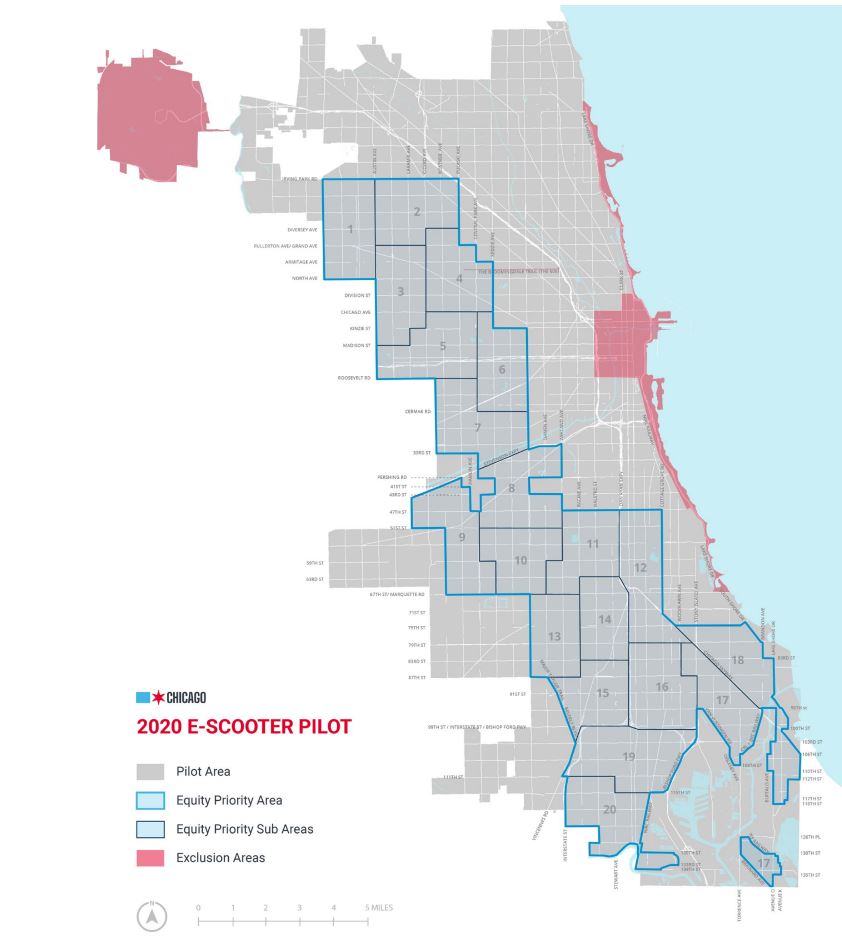 Lock-to: Perhaps the biggest change from the 2019 program was the requirement that scooters be locked to public infrastructure at the end of trips, rather than allowing for self-locking.

Active Trans and other advocates fought hard for this change after loads of complaints were made during the initial program about scooters creating sidewalk clutter and hazardous obstructions, particularly for people with disabilities. City officials say this requirement helped significantly reduce the number of complaints about scooters on sidewalks.

The lock-to requirement did lead to increased competition for bike parking during the pandemic biking boom. Some bicyclists reported struggling to find a convenient location to lock their bike due to an abundance of scooters. There were also complaints about scooters being locked to gates at private properties.

Another concern was riders not feeling safe due to car traffic and bad road surfaces when using scooters in their neighborhoods. Scooters are prohibited from being used on sidewalks, but people observed scooters on sidewalks to avoid speeding cars and potholes.

There was a decrease in the number of reported crashes involving scooters in the second pilot.

Active Trans continues to support a long-term scooter sharing program in Chicago. Any long-term program should feature many of the regulations included in the second pilot, including strict equity zones, a lock-to requirement, and keeping scooters out of downtown and off trails.

A dedicated funding source for walking and biking infrastructure would create safe places to ride on the street and help keep them off sidewalks. The vendors should be required to contribute to this Safe Streets Fund and prioritize infrastructure improvements in South and West Sides areas with frequent crashes.

Adding more bike lanes across Chicago and connecting to existing bikeways can encourage more people to ride the scooters on the street and feel safer while riding.

CDOT is evaluating the results of the second pilot after conducting a survey user and will be releasing a detailed report in coming weeks.

It will be important to review survey and trip data about how scooters were used this year after lots of reported “joy-riding” in 2019. Data from the initial pilot also showed many scooter trips replaced walking, bike share, bus, and train trips — not an encouraging sign.

When properly regulated, e-scooters can play a role in reducing car trips in Chicago. They must complement — not compete with — walking, biking, and transit to help move the city to a safer and more sustainable transportation future.