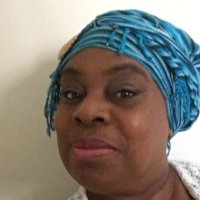 This is a continuation of our two-part blog series highlighting the walking advocacy of two inspiring women in the suburbs.

This fall the Active Transportation Alliance gathered more than 100 advocates from 63 villages and cities across the region, both online and in-person, to take part in our Bike Walk Every Town suburban advocacy training.

At the training we were honored to meet Des Plaines resident Geraldolyn Harris, who is working to improve walkability in Chicagoland’s northwest suburbs. She has big plans and has a great deal of wisdom and inspiration to offer other advocates interested in transforming their communities.

Geraldolyn’s journey into walking advocacy began in 2013 in Colorado.

As a native to Denver, Colorado, Geraldolyn grew up near the city’s oldest public park, a place she was never allowed to play when she was a young girl. “It was an old, raggedly-looking park. It wasn’t safe,” recalls Harris. The underutilized park, located along a busy road, lacked amenities for kids to play and comfortable spaces for community gatherings.

In a video produced by the Trust for Public Lands, Harris said, “As a mother and grandmother, I was not going to allow another generation to have to go out of their neighborhood to go to a good park.”

Geraldolyn spearheaded the park’s revitalization. She approached the Trust for Public Lands for its support and spent countless hours building partnerships and going door-to-door, gathering input from the neighborhood.

In the summer of 2015, through the hard work of a dedicated team, a new $300,000 playground designed by the community was installed in the park, and $1 million was invested for future improvements and amenities.

But that was not the end of it for Harris.

Geraldolyn noticed an issue with park access and car traffic due to the park’s rise in popularity. She began formulating a new strategy, working with several agencies and neighborhood groups to map out a walking, biking and transit plan around the park.

Then life changed and Harris relocated to the northwest suburbs of Chicago to join her husband.

Despite her move to Chicagoland, the Trust for Public Lands and other partners wanted her to continue the work she had started. She was hired as a consultant to train and support someone to continue to develop the park’s programming, including Walk with a Doc which involves joining a 30-minute walk led by a doctor.

With a new interest in improving walkability, Harris attended America Walk’s Walking College in 2015. The 12-week online educational program gave her a chance to build friendships and connect with other inspiring walking advocates from around the country.

Through the program, she developed a detailed action plan focused on engaging African American faith organizations in walking advocacy. “Having a concrete plan is how you get others to invest their time, talent and resources in your vision” explains Harris.

Moving from a dense urban environment to an auto-oriented suburban community, however, was a bit of a culture shock for Harris. In her Walking College Fellowship biography, she describes her observations:

“When I came out to the northwest suburbs, the first thing I noticed is that it is built for cars. The public transportation system doesn’t seem to take in account how pedestrians are accessing bus and train stops and stations. Even in the area we live in, they’ve been doing construction for about 4 or 5 years, and the construction does not take pedestrians into consideration whatsoever. There are very busy streets and the crosswalks are often in the middle of a four-way intersection.”

But Harris wasn’t willing to let these new challenges stop her.

Wanting to continue her walking advocacy in the context of her new home in Des Plaines, she began working with the pastor of her church. She is a strong believer that an important first step is exposing more people to the experience of walking in the suburbs. Once you get people walking, she believes they become more aware of the quality of their walking environment and what needs improvement.

This summer she and her pastor started a successful 6-week prayer walking group. They also began building an urban farm and a community walking garden, simultaneously fulfilling her vision to create healthy public spaces and provide improved access to fresh food.

But she’s not done yet!

After attending our Bike Walk Every Town suburban advocacy training program this fall, Harris hopes to work with the City of Des Plaines to address walkability issues at a community-wide level. She also plans to lead walk-audits in the community, bring attention to dangerous intersections, increase traffic calming strategies, and provide pedestrian education for pedestrians as well as motorists.

Her parting words of advice to advocates is making sure your community is behind you: “You need to do outreach to understand the vision of your community – that’s where you start. From there, you find a way to align your dreams.”

If you are interested in getting involved in improving walking and biking in your community, Bike Walk Every Town can help you develop your advocacy skills and connect you to a network of local advocates like Harris. For those interested in America Walks’ Walking College, Harris is now a Walking College mentor. Applications for the 2018 Walking College Program are due February 28.