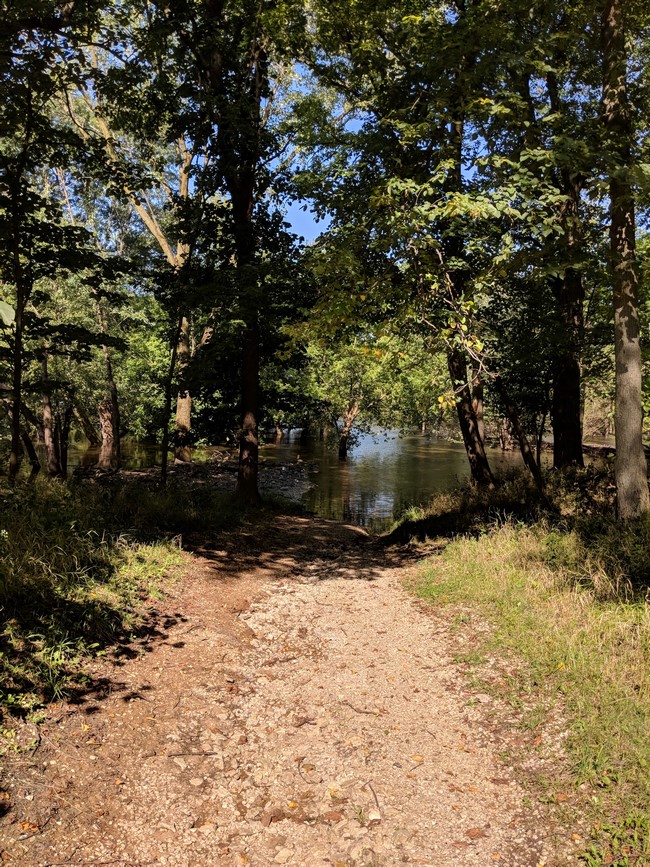 The southern segment of the Des Plaines River Trail (DPRT) between Touhy and North Avenues is often better suited for a kayak than a bike. That’s because flooding from the nearby river — like in this photo — often makes the trail either impassable or an uninviting soggy mess.

People who use the trail know that this part of the trail faces other shortcomings as well, including a lack of signage and the need to cross wide and scary arterial streets where heavy traffic is speeding by.

With these and other problems in mind, Active Trans started working with a group of committed northwest suburban advocates and elected officials. The collaboration resulted in an advocacy study showing how the trail and access to it can be improved.

The DPRT is a great community asset that extends from the Wisconsin border into central Cook County. The problem-plagued southern segment is one of four high-priority gaps identified in our Trail Connect Chicagoland vision.

Too often people walking or biking on our regional trails encounter dead ends, dangerous crossings, diversions onto stressful streets and other gaps in the network. These issues prevent people from using trails for everyday transportation and recreation. By addressing these priority gaps, we can make our regional trail network safer, more inviting and more functional.

Right now, an engineering study is being conducted for the Village of Rosemont that will include a detailed analysis of DPRT routing and street crossing problems between Touhy and North Avenue. To compliment that engineering work, which is funded by the West Central Municipal Conference and Cook County, Active Trans is examining the same segment of the trail from an advocacy perspective.

Late summer, Active Trans brought together trail advocates from nearby communities to form the Friends of the Des Plaines River & Trail. With their help and help from nearby elected officials, municipalities and government agencies, a number of solutions to improving the trail have been proposed, including:

Now that the issues and important projects have been identified, it’s time for the governmental group and Friends of the DPRT group to start advocating for these improvements.

“As a life-long trail user, it is important to have access to the forest preserve with its educational value, recreational opportunities, as well as its contribution to the local economy,” said Mayor David B. Guerin of River Grove. “It is my hope is to see our trail system improved and preserved for our future generations.”

Active Trans will be working closely with Mayor Guerin and others to ensure the trail is improved for all users. If you’re interested in advocating for improvements along the DPRT, please contact Matt Gomez, Active Trans Trail Advocacy Manager, at matt@activetrans.org to see how you can help.