Home / Blog / Stories from the bus

Stories from the bus 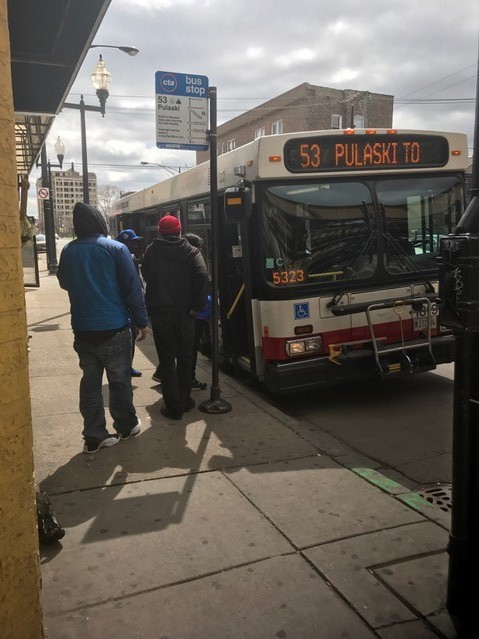 During the time I spent doing relational meetings centered around bus advocacy, I have had the opportunity to learn a lot and heard varying opinions of local bus service. One thing is for sure, a lot of people rely on CTA to get downtown. But what about getting to all the other destinations in Chicago?

Among young commuters, reliability is a frequent complaint. Youth that I spoke with were frustrated by some trains randomly becoming express trains, forcing commuters to exit the train and wait on another train. Other problems include trains sitting on the tracks, waiting for clearance. This can lead to annoying, lengthy delays.

Some issues, like sexual harassment and personal safety, are more serious.

“One time I had a man grab my ass on the bus,” said one woman I spoke with named Adilene.

It is no secret that women must deal with harassment everywhere they go. Having to face with this on their daily commute is driving female commuters to become car owners to avoid these types of confrontations. Others expressed concerns about the violence on the CTA, including people being harmed or robbed. People are feeling unsafe.

“I feel as if CTA should do something more about the safety of its passengers,” said a womna named Sierra. “They should start by getting security. Instead of spending $280 million on a brand-new train station they could have funded solutions for better safety.”

Commuters also believe the CTA should start playing a bigger role in social issues that affects its passengers. What could that look like? We will have to see.

While conditions may seem worse in the commuter’s eyes, they still have faith that the system can improve while acknowledging that nothing is ever perfect.

Ideas for improvement vary from bringing back stops that were previously taken away to creating new train lines.

“I think there should be a train that connects midway airport to O’Hare airport,” said a man named Jeff Bartow.

Several commuters believe it will be a good idea for CTA to have security guards at the train platforms to help ensure safety of its passengers. While others believe they should start cleaning the trains and buses more often.

“No one likes being in a dirty environment,” said said a woman named Rakiha.

Good things about the CTA

While bus service is slow and unreliable, there is a lot of good that comes from the CTA.

“Chicago has one of the BEST transit systems in the United States,” said one person I spoke with.

Chicago is known for its transit system and being able to get anywhere on the bus or train in the city. For college students with U-passes the CTA couldn’t be a better option for commuting.

We will have to see how CTA reacts to this data from the Bus Friendly Streets Report Cards and hope they listen to the communities when making improvements for this upcoming year.

Want to engage your alderman in person? Check out Chicago’s first-ever Bus Friendly Streets Report Cards and sign up as a Back on the Bus Volunteer to learn about how to advocate locally within your ward for bus only lanes, faster boarding and giving buses priority at traffic lights.