Speak up for a greener, safer, more equitable Grant Park 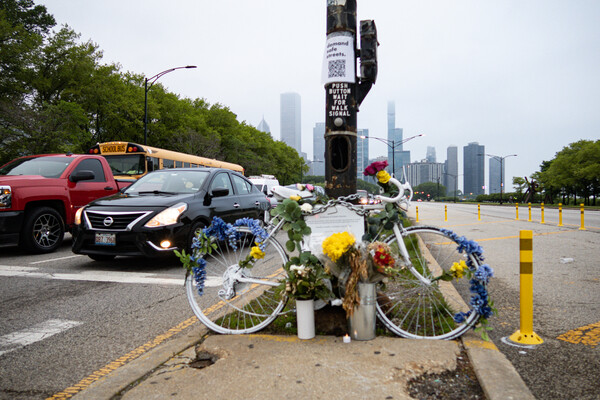 The plan seeks to define Grant Park’s role as a neighborhood park, a key destination, and as a public space, and it will outline next steps in the park’s development.

The park district is hosting a series of public meetings to share updates on the design process and allow the public to ask questions. There are three in-person opportunities to learn more about the project and provide feedback.

The open-houses (which will each offer the same format) will be 5-7 p.m. as follows:

This is a great opportunity for letting the city know what you envision for a Grant Park that is safe and welcoming to everyone.

Active Transportation Alliance staff participated in a series of stakeholder meetings to discuss the goals of the plan. During these meetings, our team spoke up about the need for safer, greener, and more equitable infrastructure throughout the park and the rest of the Loop.

Here’s an overview of what we’d like to see for Grant Park and the surrounding area:

Safer crossings: Advocates across the city have been fighting for years to improve walking and biking crossings to and along Grant Park and the lakefront. Thanks to groups like Bike Grid Now!, we have seen improvements to one of the most dangerous crossings on DuSable Lake Shore Drive (DLSD).

Improvements like this, however, do not go nearly far enough. There should be safer crossings at every intersection in and around the park. We want to see raised curb bump outs, tighter turn radii, narrower lanes for traffic, more signalized intersections, and far less traffic at each intersection.

Better walking and biking infrastructure: There are too many high-speed roadways in and alongside Grant Park, and cyclists have very few safe options for biking – other than using the Lakefront Trail.

We want to see the city implement more separate bike paths, build more concrete protected bike lanes, and add bike traffic signals. Too many cyclists are dying in Chicago and our leaders need to act now.

We would also like to see needed additions of drinking fountains, benches, and restrooms, as well as key signage in multiple languages.

A pedestrianized Columbus Drive: Our city does not need an 8-lane wide roadway tearing through its front yard. There are plenty of alternatives to Columbus Drive, and we ask the City of Chicago to reimagine it as a pedestrianized boulevard that can accommodate people walking, biking, and rolling throughout the park.

Emergency vehicles, ride hailing drivers, taxis, and other vehicles could still access the boulevard, but it would no longer be the free-flowing high-speed corridor that it is today. Imagine a farmer’s market on Columbus Drive instead of semi-trucks.

Bus-only lanes: A healthy and growing bus system is critical to building a more sustainable transportation network in Chicago. Unfortunately, the buses travelling along Michigan Avenue and DuSable Lake Shore Drive are frequently stuck behind traffic or unable to pass illegally parked cars.

We call on the city to implement bus-only lanes along Michigan Avenue and DLSD to speed up the buses along such a busy corridor connecting riders to key destinations and employment centers. A bus full of dozens of people should take precedence over single-occupancy vehicles.

A truly reimagined DuSable Lake Shore Drive: DLSD has the unfortunate distinction as one of the city’s most crash-prone roadways. The Chicago Department of Transportation and the Illinois Department of Transportation are currently “reimagining” North DLSD, but we’re concerned that these plans will only reinforce the roadway’s status as a dangerous and car-centered place that continues to cut off residents from the lakefront.

It’s time to reimagine DLSD as something safer and more welcoming than a dangerous, polluting highway that divides the residents from their lakefront. Along Grant Park, we want to see safer crossings to the lakefront, significantly slower speeds, and bus-only lanes.