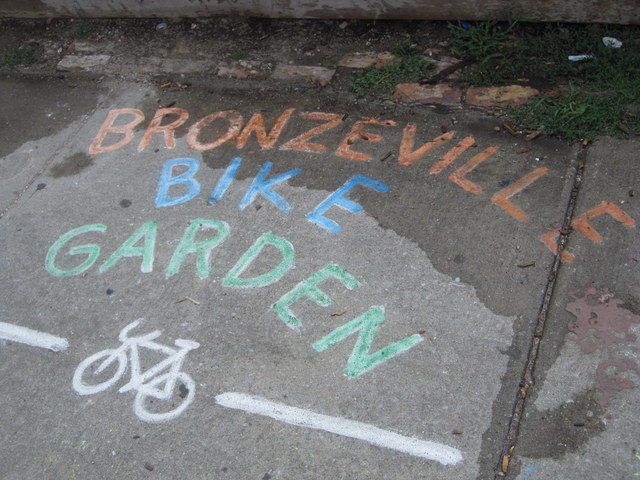 You may have heard about a group of advocates who recently asked the City of Chicago to create better conditions for cycling, including more bike lanes and Divvy stations, on the South and West Sides. With the South and West Sides too often misrepresented as cycling deserts, it is fantastic to see local cyclists like Oboi Reed, Shawn Conley and Peter Taylor (Taylor serves on our board of directors) leading the charge for better biking!

Local support is the most important factor for securing new bike infrastructure. Active Trans is coordinating with these advocates to help build support for expanding Divvy, rolling out more bike lanes and making other bike infrastructure improvements, like advocating for improved bicycle access to the planned Big Marsh Bike Park.

Bike facilities are still inadequate despite significant progress in recent years, and more broadly there is a lack of Complete Streets that safely accommodate biking and walking. Unsafe intersections and crossings, wide streets with fast moving cars that are difficult to bike on or get across, and crumbling sidewalks are unfortunately commonplace. All of this can make biking and walking on the South and West Sides difficult.

Just as crippling is rapid transit service that doesn’t get people to job centers and other destinations in a reasonable amount of time, slow-moving buses stuck in traffic, and Metra trains that don’t stop enough or at all in the city.

Red Eye reported on the advocates this week, and the story attributes comments to me that one might read as saying that the South and West Sides shouldn’t expect the same investment in cycling as the North Side. My point, however, was that it’s not fair for the city or anyone else to use the lower rates of cycling compared to the North Side as an excuse to not provide bike facilities.

That’s not a fair comparison given the lower population densities on the South and West Sides and because some destinations, like grocery stores, are further away and not within an easy ride.

But cycling is already on the rise in these communities, and they are just as deserving of bike facilities and other investments that will continue to get more people riding. I also told the reporter that, while it’s true 43 percent of the new lanes are on the South Side, the South Side is much bigger geographically than the North Side. A better measure to assess progress would be bike lanes per square mile or whether or not bicycle accommodations exist within one-half mile of every Chicagoan — one of the key principles in the city’s Streets for Cycling plan.

We do not insist on Copenhagen-like biking rates before installing bike lanes on the North Side, and we can’t insist on North Side biking rates before investing on the West and South Sides. Every community has room for growth and deserves good transportation options. Moreover, we know bike lanes and Divvy trips actually make our streets safer for everyone, including people in cars and on foot, by creating calmer, more orderly streets.