Home / Blog / Show your support for improving safety on Manor

Show your support for improving safety on Manor 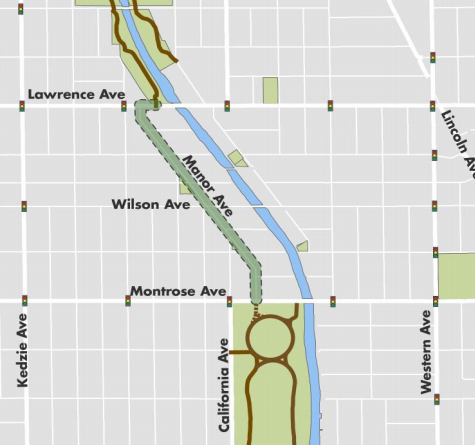 Manor Avenue on Chicago’s North Side is already a popular route for biking and walking, but its popularity is expected to soar once pieces of the Chicago River Trail fall into place to the south.

The half-mile long street — which runs at an angle between West Montrose Avenue and West Lawrence Avenue in the Ravenswood Manor neighborhood — hosts a handful of businesses, as well the Francisco Brown Line L station, while also connecting several parks — most notably Horner Park to the south and Ronan and River Parks to the north.

33rd Ward Ald. Deb Mell, working with the Chicago Department of Transportation and the ward’s Transportation Advisory Committee, has proposed a neighborhood greenway for the street to make it safer, more welcoming and easier to access for people biking and walking.

Active Trans is particularly excited about a feature of the greenway that reduces the sometimes heavy cut-through car traffic on the street.

Under the current proposal, Manor would remain a two-way street, but this special feature, called a traffic diverter, would require people driving northbound and southbound on Manor to turn east or west onto Wilson. Wilson will be maintained as a through street crossing the river, but north and south turns from Wilson onto Manor will be prohibited. People biking, however, will be allowed to enter Manor going north or south at Wilson.

The traffic diverter will be installed temporarily with wooden barricades from Sept. 19 – Nov. 18 to test how it works. Unfortunately, many neighbors are resistant to installing a permanent version of the diverter.

This is where we need your help.

If you want to see calmer traffic on this key North Side biking and walking route, please voice your support for the greenway and the traffic diverter with Ald. Mell’s office: manorgreenway@gmail.com.

And if you’re a ward resident, come show your support for the greenway and the traffic diverter at the 33rd Ward’s next Transportation Advisory Committee meeting on Sept. 22, 6:30-7:30 at the Horner Park Fieldhouse (2714 W. Montrose).

Other features of the proposed Manor greenway include:

CDOT, the alderman, the ward’s transportation committee and many local residents say that these improvements to Manor are crucial because there’s little doubt that the number of people biking and walking will mushroom on Manor during the next year or two when a couple of trail connections to the south get built: The Riverview Bridge that will connect Clark Park and California Park, and the trail connection under West Irving Park Road.