Home / Blog / Shining a light on outstanding volunteers and advocates 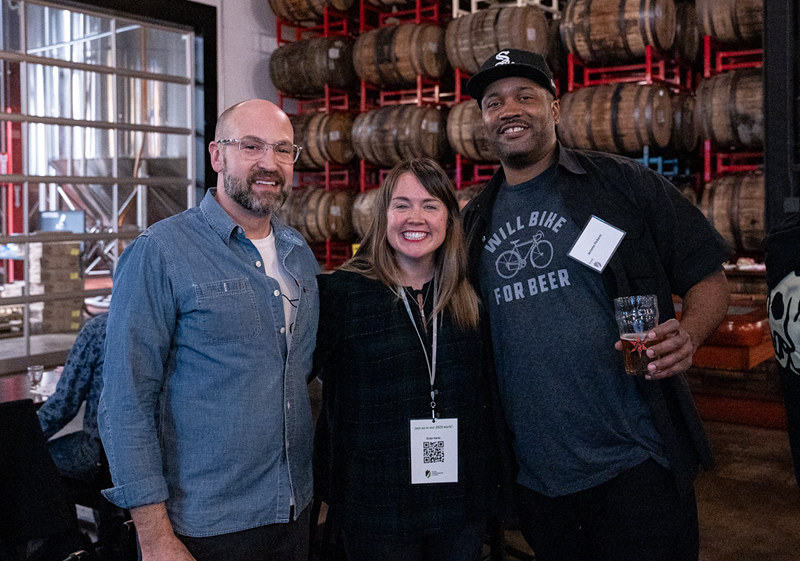 Active Transportation Alliance members recently met to reflect on accomplishments in 2022, discuss what lies ahead, and elect a handful of people to the organization’s board of directors.

The event, attended by 175 people, also provided an opportunity to recognize the outstanding advocates and volunteers in our midst.

For our advocacy awards, we honored four different grassroots groups that are mobilizing people across the city. These groups are actively making our movement stronger with their effective organizing and smart campaigning as we look to 2023.

These are the groups that received our Advocate of the Year awards:

The Plow the Sidewalks campaign is calling for sidewalk snow removal to be a universal, municipal service. Led by our friends at Access Living and Better Streets Chicago (pictured below, top, left), the campaign has been making a strong case for the economic, safety, and environmental benefits that universal snow removal can bring to our city.

Already the campaign has 10 alderpeople supporting the goals of the campaign, and the team is working hard now to secure $750,000 for a pilot project to show how a citywide program could work.

While you may have seen Chicago Bike Grid Now’s “bike jams” taking over the streets this year, this award shines a light on their Bike Bus campaign that’s meeting an immediate need for safer places to ride while also building a movement for a longer-term vision for change (pictured below, top, right).

The Bike Bus now boasts three routes: Milwaukee Ave., North Halsted, and South Halsted. Every Wednesday at 7:30 am, the three buses depart and pick up folks on bikes as they proceed on their regular route downtown. You can even track the bike bus so that you know just when to intercept it.

Commuters Take Action (pictured above, bottom, left) has emerged as a formidable grassroots force over the past year. Their work has garnered multiple articles in the media highlighting their organizing success, rallies, and sharp data analysis.

We specifically wanted to recognize their effort to cast spotlight on the problem of Chicago’s ghost buses.

Thanks in part to their efforts, Chicago Transit Authority President Dorval Carter Jr. will be going before city council once a quarter now. This is a big step towards greater transparency and accountability at an agency that for too long has operated largely in the dark.

Southwest Collective’s mission is to provide an open forum for Southwest Side residents to voice their concerns, connect neighbors, and highlight public resources.

One of the organization’s areas of focus in cycling advocacy. The group organizes monthly group rides on the Southwest Side on side streets to create a safe biking experience that is family-friendly and geared toward people of all ages and abilities.

The organization’s bike advocacy team (pictured above, bottom, right) has also been advocating for bike safety on the Southwest Side by identifying the barriers to biking in the area, and it has partnered with Divvy to bring bike sharing to the community.

Awards were also given to a collection of our long-term event volunteers. Without these dedicated individuals, we could not pull off our enormous Bike the Drive event.

This year we gave the Bike the Drive Legacy Award to 14 volunteers, each of whom has been volunteering for more than 10 years.

We applaud the dedication of these individuals (pictured below, top, left):

Volunteer of the year award went to Martin Frank, a long-standing SAG driver for Bike the Drive. The SAG drivers are the individuals who transport riders who are no longer able to ride in the event due to sickness, injury, or some other issue.

Martin regularly goes beyond his SAG duties and has saved the day several times by transporting volunteers and supplies that are urgently needed throughout the 15-mile course.

Another honoree during the event was Randy Neufeld, someone who’s been a potent force for walking, biking, and public transportation in the region for decades.

Randy (pictured above, bottom, right) was Active Transportation Alliance’s first executive director (when it was called the Chicagoland Bicycle Federation). Since departing from his staff role, he has been serving as a board member for the organization. Now he’s stepping down from the board.

Executive Director Amy Rynell said Neufeld has been a key figure in the local movement for sustainable transportation.

“He’s a big thinker, he is persistent, he is energizing and fun,” she said. “Creating a great region for active transportation has been his life’s mission and we’re all the better for it.”

During her remarks to attendees, Amy Rynell (pictured above, bottom, right) pointed out the new momentum that the movement has achieved and the progress gained in the past year. “A movement that was once small and mighty has grown into a force to be reckoned with,” she said.

One of the notable successes of the past year is the city of Chicago finally switching to concrete for protected bike lanes instead of the easily crushable plastic posts.

In our upcoming work, Rynell said the organization will be busy preparing for the first round of municipal elections in February. As part of this effort, we’ll be rolling out a multi-faceted campaign to educate voters and candidates about our work to improve walking, biking, and transit in Chicago.

Here’s an overview of the election-related work we’ll be doing:

“Never before have we faced such challenges or been presented with such opportunities to make transformational change,” Rynell said. “The course we chart will depend on each and every one of us joining the fight and make 2023 a banner year for walking, biking, and transit in Illinois.”