Separating bicyclists and pedestrians is safer 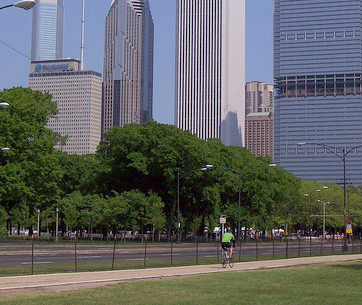 We’ve heard repeatedly from Lakefront Trail users that creating separated trail space for bicyclists and pedestrians would make everyone feel safer on the path.

Sign our petition to separate bicyclists and pedestrians on Chicago’s Lakefront Trail.

The Canadian study, published in the new issue of the BMJ Open medical journal and covered by the urban not-for-profit Next City, is one of the first to analyze the relationship between route infrastructure and the severity of injuries resulting from crashes.

As other studies have shown and many advocates already know, the study underscored the importance of separating bicyclists from motor vehicle traffic with protected bike lanes and other facilities. Collisions between fast moving cars and bicyclists are more likely to result in serious injury than other types of crashes involving bicyclists.

The study’s findings on the safety of multi-use paths are more newsworthy. The authors found that crashes on sidewalks and multiuse paths, despite occurring off-street, were considerably more likely to result in ambulance transport and hospital admission, in comparison to crashes on major streets without bicycling infrastructure.

Twenty-seven year old Megan Williams was involved in one such crash with a bicyclist while running on the Lakefront Trail this fall. After recovering from the crash, she approached Active Trans and other trail advocates pushing for separated space for bicyclists and pedestrians on the path.

So far, more than 1,600 Chicagoans have signed our petition to the Chicago Park District to separate pedestrians and bicyclists and commit to other safety improvements. Sign and share our petition today.

If you’re interested in getting involved in the campaign, please let us know. You can also donate to the campaign and renew your membership or join as a new member today to show your support.