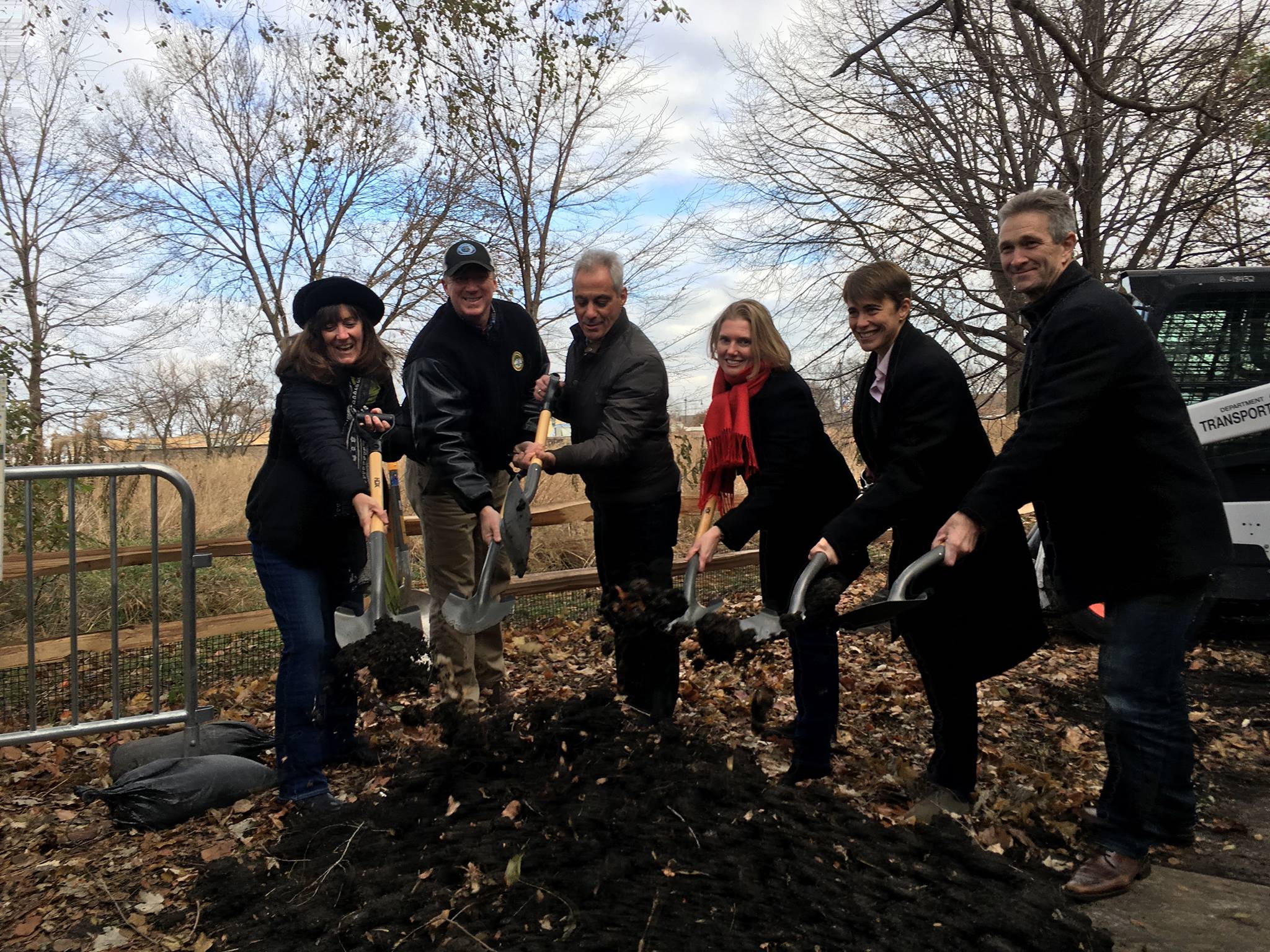 The city made exciting progress towards a continuous Chicago River Trail in 2018 with projects breaking ground that’ll add 2.6 miles to the growing river trail network.

The projects include a new trail at Lathrop Homes, the 312 RiverRun (pictured) and Manor Greenway.

As wonderful as these projects are, trails are only useful if neighborhood residents can access them safely and easily.

For the past year, our campaign for a continuous Chicago River Trail worked with residents and decision makers in many neighborhoods to advance safe east-west connections for people walking and biking.

Along the South Branch, a new vision emerged for better walking and biking in Pilsen, Bridgeport, Brighton Park and McKinley Park. The largest remaining gap in the river trail is a five-mile stretch from Ping Tom Park to Western Avenue.

To get the ball rolling, we engaged residents and organizations to identify better connections between assets like parks, CTA stations and small businesses. Walking and biking are especially challenging due to the area’s industrial legacy, semi-truck traffic and numerous sites where environmental clean up is needed.

At the same time as the South Branch project, the city announced it will explore an extension of the riverwalk south to Ping Tom Park, offering an immediate opportunity to fill in a gap of 1.7 miles and take a necessary step for a trail along the the South Branch.

On the Northwest Side, we partnered with UIC public health students to highlight the many benefits the Weber Spur Trail will bring to the neighborhood. In addition to connecting two of the busiest regional trail networks — the North Branch and North Channel Trails — the southern part of the Weber Spur will provide safe passage through a high-crash area for people biking.

Along with these projects, our campaign is calling for separated paths for people walking and biking in two key river developments, Lincoln Yards in Lincoln Park and Bucktown, and the 78 in the South Loop. These projects offer near-term opportunities to add separated trails along the river.

So where is the Chicago River Trail campaign headed in 2019 and how can you get involved?

Stay tuned for the release of a report by our partner, Metropolitan Planning Council, that will feature ideas for improving connections along the South Branch.

You can support a safer Logan Boulevard by signing this petition.

Also, we’re excited to have two projects in the pipeline that will develop concepts for filling in existing trail gaps.

The first one will advance ideas for connecting the trail at Lathrop to the 312 RiverRun at Belmont Avenue; the second one will explore ways of creating safe bicycle access on a stretch of Wacker Drive near the Riverwalk. It will also take persistent advocacy to advance the many recommendations identified by our recent projects and in planned developments.

Thank you to our members and supporters for your leadership this year; we couldn’t have achieved these victories without your dedicated support.

Take action now and join the campaign for a continuous Chicago River Trail.

Photo, courtesy of the Chicago Department of Transportation, shows the groundbreaking of the northern section of the 312 RiverRun project that will connect three parks along the Chicago River on the Northwest Side. Among those pictured, from right, are Active Trans Executive Director Ron Burke, 33rd Ward Alderman Deb Mell, Chicago Department of Transportation Commissioner Rebekah Scheinfeld, Mayor Rahm Emanuel and Chicago Park District General Superintendent and CEO Michael Kelly.