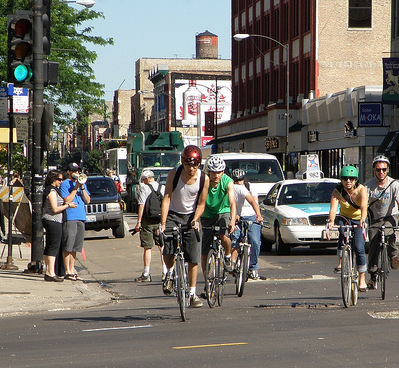 What if every time you were approaching a red light on your bike, it magically turned green allowing you to blissfully carry on your journey without a care in the world?

The stuff of fantasy, you say? Not so!

Today the city is unveiling Chicago’s first-ever example of this on Wells Street between Huron and Wacker. This “Green Wave,” as it’s called, will make the fantasy of uninterrupted cycling a reality, at least on this one stretch of street — and hopefully more soon.

Anyone who has biked on (or driven) this stretch of Wells knows that you inevitably get stuck waiting at multiple lights when trying to navigate this corridor. That’s where the Green Wave comes in.

The concept is simple: traffic signal cycles are coordinated on a street corridor so that a person traveling at a set speed on a bike will only hit green lights.

By reducing the number of times a person on a bike has to stop and start at red lights, the Green Wave makes biking an easier and more convenient travel option. San Francisco already has several Green Wave projects installed.

For Chicago’s first Green Wave, signals on Wells are now timed so that a person on a traveling 12 mph will hit green lights from Huron all the way down to Wacker. This stretch of Wells is a southbound one-way street that is one of the most popular bike commuter routes into the Loop.

We’re excited to see how this new feature will improve people’s experience of biking downtown and hope to see more projects like this in the future.

Have you ridden the Green Wave? Let us know what you think in the comments below.