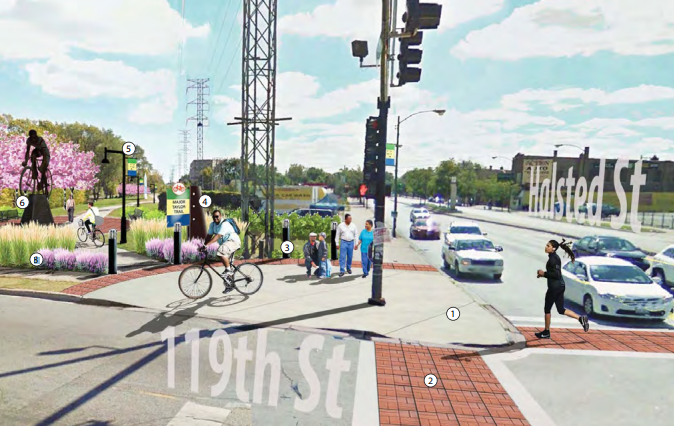 With the development of Big Marsh Bike Park in South Deering and the Pullman Historic District becoming a national monument, lots of exciting things are happening on Chicago’s far Southside. One more project to add to that list is the 119th Street Corridor Plan.

The corridor will run four blocks along 119th Street in West Pullman between I-57 and Union Street, with the Major Taylor Trail crossing through on Halsted Street.

Once a thriving industrial area surrounded by houses, West Pullman saw a decline in jobs and population when factories closed in the 1980s. There have been improvements happening in the last decade with the addition of a community center, a library and retail shopping center.

With input from local residents, businesses, organizations and others, some of the 119th Street Corridor Plan’s major goals are to redevelop vacant space, bring more economic and employment opportunities, attract new residents and make streetscape improvements.

Currently along 119th, there are no accommodations for bicycles, there is a lack of crosswalks at three intersections, and sidewalks are missing or in need of repair, especially near vacant properties. To build better transportation infrastructure, the plan includes adopting the Complete Streets principles to encourage more walking, biking and transit use along the corridor.

There will be zebra-striped crosswalks installed at intersections as well as midblock crosswalks. In addition to sidewalk improvements, another feature will be a 10 ft. wide multi-use bike/ped path located on the north side of the street, connecting to Marshfield Plaza Shopping Center and the Kroc Center, a state-of-the-art community center. These improvements will also give people easier access to the Major Taylor Trail and public transit.

Although there is much work to be done, 119th has room for both development of vacant spaces and streetscape improvements. Making the current transportation network better will not only increase safety for people walking, biking and using transit, it’ll also encourage more community development.

The Far South Community Development Corporation (FSCDC) partnered with the City of Chicago to further the goals of the proposed plan. The plan is part of GOTO 2040, the Chicago Metropolitan Agency for Planning’s (CMAP) 30 year regional plan to build more sustainable and livable communities.

Through community meetings, surveys and a steering committee, the FSCDC is doing outreach in West Pullman and surrounding neighborhoods that will be affected. Building on community strengths is a vital process in developing the next steps in making the corridor a reality.

For more information on the 119th Street Corridor Plan, view the draft plan.

If you’d like to be a part of the transportation committee for the 119th Street Corridor Plan, contact Abraham at lacy@farsouthcdc.org.