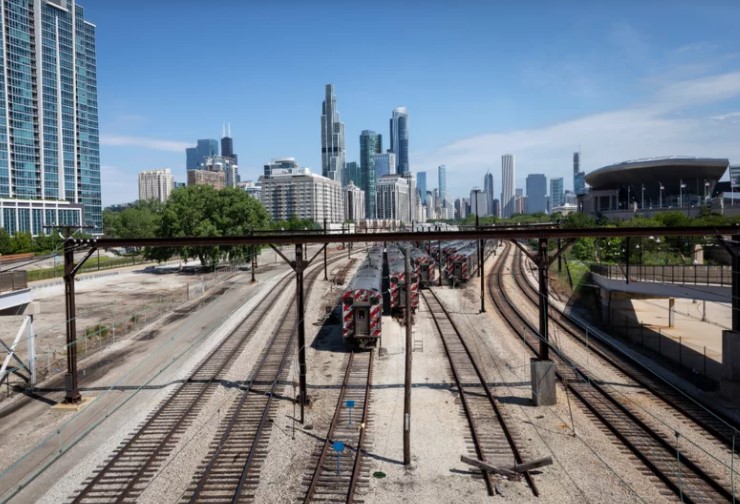 The proposed One Central tower and transit hub on Chicago’s South Side is poorly conceived and wouldn’t increase transit access for the city’s highest need residents.

Buckner, whose district includes the site, says he’s heard from constituents opposed to the project and he’s angry that it was “rammed through without real conversations” with people who represent the area.

WHAT IS ONE CENTRAL?

First proposed in 2019, the megadevelopment features a residential and commercial high-rise just west of Soldier Field on 31 acres decked over Lake Shore Drive and the Metra Electric tracks. It also would serve as a transit center with stops for Metra and Amtrak trains and a connection to the CTA Red Line.

The transit center serves as the key selling point for public financing of the project, which was approved by the Illinois legislature in 2019. The legislation established a funding mechanism for the project whereby the state pays for construction of the transit center and is paid back in “new tax revenue and other economic impacts.” Experience shows this return on state investment is far from certain.

The problem with using the transit center to justify a large public subsidy is there’s no clear need for a hub at this location. It’s never been included in any local, regional, or state plans and there’s been no public engagement demonstrating community need. It’s located in an area that’s already well served by nearby transit and filled with relatively dense, mixed-use development.

The developer has never produced a transportation study justifying the need and benefit of a transit hub at the site, despite repeated inquiries by advocates like Active Trans and local and state officials. Neither CTA nor Metra were engaged in the planning process until recently, when both agencies said they’ve been in productive talks with the developer.

WHY REPEAL IS NEEDED

When the proposal resurfaced with community meetings during the pandemic earlier this year, Rep. Buckner and other state and local officials started raising concerns. Gov. Pritzker questioned whether public financing still makes sense for the state:

“With the pandemic’s economic turmoil upending state budgets around the country, it would be a challenge for any state to provide the significant amount this developer is seeking. The state faces tremendous challenges and our efforts will focus on rebuilding in the aftermath of the pandemic and supporting residents hardest hit by the disease.“

Rep. Buckner’s bill would put this question to rest by repealing the legislation that established the public financing mechanism for the project.

This repeal would be a welcome and necessary step to prevent the misuse of public funds and support sound transit planning. The original bill established a dangerous precedent allowing developers to bypass established community engagement and regional planning processes for major transportation projects.

There’s an abundance of high-impact transit projects with strong community support and many years of planning and analysis demonstrating the need. Projects like the long-promised Red Line South Extension and a citywide network of bus priority streets would boost transit access and reliability for the highest need residents and help reduce driving citywide.

Downtown transit improvements, such as a central area circulator, are possible independent of the One Central development, particularly if downtown business owners are willing to help pay for them.

Strong public investment in transit is necessary in order to address the climate crisis and fix our broken, inequitable transportation system. Legislators should pursue new, more aggressive approaches to funding and building transit based on its clear public benefits.

But handing over public funds to a private developer for a transit project with an abundance of community and planning concerns wouldn’t help our cause. In fact, it would undermine it.