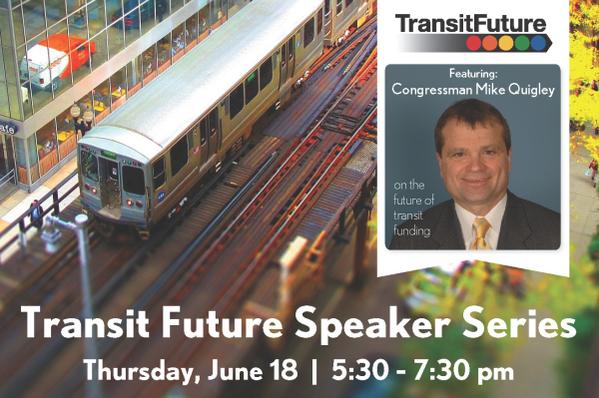 Illinois Congressman and transit champion U.S. Representative Mike Quigley will headline the first event in a new series about the benefits of transit investment and the need for Transit Future in the Chicago region.

Donate $25 to the campaign to reserve your spot at the June 18 kickoff event today.

The Transit Future Speaker Series will gather policymakers and business and community leaders to engage in an urgent conversation on how to fund transit expansion in the Chicago region. Rep. Quigley is the first of a host of prominent leaders we’ll be featuring in the series over the next several months.

Congressman Quigley has long been one of Washington’s biggest allies for people who bike, walk and ride transit in the Chicago region. Just this week he spoke out against the annual transportation spending bill that passed the House and included devastating cuts to public transit.

“Instead of investing in our future, the bill dramatically cuts key transportation and housing initiatives that could grow our economy, create jobs and strengthen local communities,” said Rep. Quigley.

He’s also leading the fight for increasing the safety of people who bike and walk by establishing performance measures that would help government prioritize street designs that are safe for all users and protect vulnerable people biking and walking.

Our Transit Future vision is dedicated to creating a more livable, economically competitive and environmentally sustainable region built on a public transportation system that works for everyone.

Join us at next Thursday’s event to show your support and sign a letter to your commissioner in favor of transit expansion.