Home / Blog / Pushing for policy changes to Clear the Way 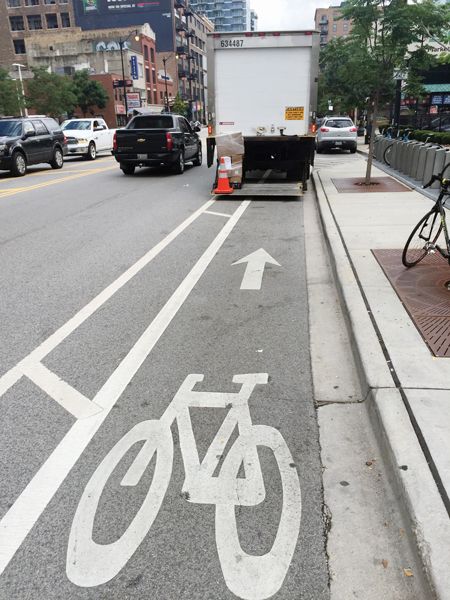 We know you’ve seen it: delivery trucks obstructing bike lanes, construction sites that render sidewalks treacherous or impassable, and people who think that crosswalks serve as parking spots. We see it a lot, too, and think it’s time to step up enforcement of these law-flouting drivers and construction companies.

Dangerous conditions like these were the target for a recent campaign called Clear the Way in which we asked our Chicago supporters to document each time they saw one of these violations by taking a photo, filing a report via 311, and then posting the photo on social media. Over just a couple of months, we received more than 500 reports from people all over the city.

In December, we followed up the campaign with a letter to the Chicago Department of Transportation recommending the following policy changes, which were based upon feedback from supporters and analysis of how other cities are addressing the problem.

Since we submitted these recommendations, the response from CDOT has been positive — its leaders have expressed an interest in working with us and others to tackle the issue.

“Any time sidewalks and bike lanes are illegally blocked, it creates inconveniences and raises safety issues for everyone using the right of way — especially more vulnerable users such as people walking and biking,” said Rebekah Scheinfeld, Commissioner of the Chicago Department of Transportation. Scheinfeld said these 311 reports from the Clear the Way campaign provide valuable information the city can use for improving safety. “We are working with our partners in other city departments to improve the 311 system and to increase enforcement, and we look forward to continued collaboration with partners like Active Trans and other community stakeholders as we roll-out our Vision Zero action plan this year.”

Sign up as an advocacy supporter to receive updates about Clear the Way and other active campaigns.

In the meantime, we encourage you to continue to file reports via 311, and let your local elected officials know this issue should be a priority.

Thanks to everyone who participated in the Clear the Way campaign. You can check out our trove of photos submitted on our Flickr page.

This article appears in the winter edition of our quarterly print newsletter. To receive our newsletter, become a member today.