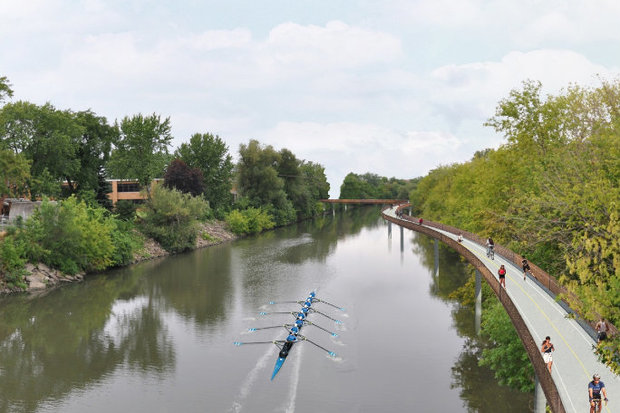 On Friday, President Obama signed the first long-term federal transportation bill in more than a decade into law, and there’s plenty of good news for people who bike, walk and ride transit in Chicagoland.

The Fixing America’s Surface Transportation (FAST) Act is a five-year bill with more than $300 billion in infrastructure funding, including $61 billion (20 percent) for public transportation systems.

The act preserves more than $820 million in annual funding for the Transportation Alternatives Program (TAP), the largest dedicated source of federal funding for biking and walking projects.

Last month we wrote about the impact of the program in Chicagoland and thanked more than 1,300 Active Trans supporters for signing letters asking their members of Congress to protect it.

Only states in which 15 percent or more of overall traffic fatalities are people biking or walking are eligible for funding, and the money will go towards enforcement and education programs. Illinois’ percentage has been about 17 percent for the last few years.

Illinois Sen. Dick Durbin and Rep. Daniel Lipinski played major roles in shaping the final legislation. They both served as members of the conference committee charged with working out the differences between the House and Senate bills.

Thanks in part to their efforts, Amtrak will be eligible to apply for a large amount of federal funding for planned upgrades to Union Station.

In another win, the act directs the U.S. Department of Transportation to encourage states to establish and implement Complete Streets policies, requiring planners to design streets so they accommodate all road users.

While the FAST Act is a sign of progress, the legislation’s overwhelming spending on highways and flat funding levels for active transportation shows there’s much more work to be done.

As our movement continues to grow, we’ll be in a better position to argue for increased funding on biking, walking and transit – rather than just fending off attacks.

Active Trans relies on our national partners for insight and information on this bill and other federal policy issues year-round. Learn more about these organizations and their analysis of the FAST Act on their websites: League of American Bicyclists, Transportation for America, Smart Growth America, People for Bikes and the American Public Transportation Association.