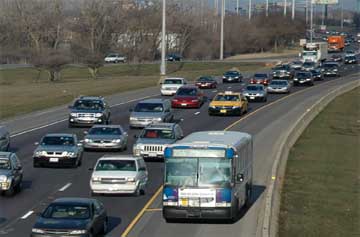 On Tuesday Pace – the suburban bus division of the Regional Transportation Authority (RTA) – unveiled a proposal it has submitted to the federal government to “change the suburban transit environment” with expanded bus rapid transit (BRT) service.

See the map of the proposed network in the Chicago Tribune.

These relatively affordable options are a critical aspect of solving the region’s persistent suburban connectivity challenges. As we and other advocates have said for years, our current hub and spoke transit system feeds Chicago’s downtown area well but fails to connect many other neighborhoods and communities where the vast majority of Chicagoland residents live, work and visit.

Despite the relatively modest price tag for this type of high-impact network, Pace leaders have said the likelihood of it being fully funded by the federal government is slim, considering the country’s current budget limitations and gridlock in Washington, D.C.

That’s why we continue to work with the Center for Neighborhood Technology (CNT) to advocate for a dedicated revenue stream locally to help fund transit improvements and expansion in Cook County. You’ll notice many of the ART routes in our Transit Future vision are the same or similar to the routes featured in Pace’s most recent proposal.

You can support rapid transit expansion and projects like those outlined in Pace’s proposal by signing our petition to the Cook County Board of Commissioners. You can also volunteer to help spread our message and organize transit supporters in your area or donate to the campaign.