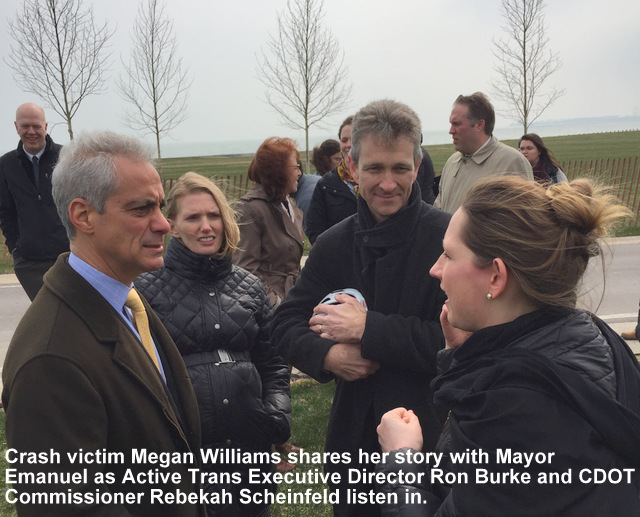 Active Trans' Our Lakefront campaign aims to make walking and cycling safer and more convenient along our lakefront while increasing access to public transit.

We advocate for making biking, walking and transit improvements the priorities in long-term construction projects – like the reconstruction of North Lake Shore Drive – while calling for less costly enhancements that could be made now to the improve the experience for all trail users.

With a growing number of users and more public attention on Chicago’s lakefront – particularly during the busy summer months – it’s an ideal time to mobilize trail users to push for biking, walking and transit improvements.

We're currently advancing all of these goals in a Lakefront Trail planning process with the Chicago Park District and the Chicago Area Runners Association (CARA). Through this partnership we provide advice and recommendations to the park district on how to ease congestion and conflicts on the trail, with a focus on creating separate trails. Lakefront Trail crash victim and Active Trans volunteer Megan Williams has been a key advocate for separation since 2014.

In March 2016 Mayor Emanuel announced the trail will be widened and split into separate lanes for people on bikes and people on foot in two of the most congested segments. We continue to work with the city to ensure leaders effectively implement these improvements and continue to upgrade trail infrastructure.

In December 2016 Mayor Emanuel and the Chicago Park District announced hedge fund manager Ken Griffin donated $12 million to the city to create separated paths for people biking and people on foot along the full length of Chicago’s Lakefront Trail. According to the park district, the bike trail will be 12 feet wide and made of asphalt. It will be located closest to Lake Shore Drive. The pedestrian trail will be 20 feet wide. It will include 14 feet of asphalt buffered by 6 feet of “soft surface mix” on either side.

The city said Griffin’s donation will allow the park district to complete separation along the full length of the trail by the end of 2018. We are working with the park district and CARA on the plans segment-by-segment. In May 2017 the park district started construction on the first North Side segment between Fullerton and Ohio.

A project team comprised of the Illinois Department of Transportation (IDOT), Chicago Department of Transportation (CDOT) and Chicago Park District (CPD) is in the midst of a planning process to rebuild North Lake Shore Drive between Grand and Hollywood Avenues. Launched in 2013, the proposed project involves seven miles of the 8-lane Lake Shore Drive boulevard, including the 12 highway junctions and the surrounding parkland.

Active Trans recognized the once-in-a-generation opportunity to increase access and mobility along the Lakefront and worked with a coalition of 15 organizations to release a civic platform for the project in 2013. Since then we have organized people who bike, walk and ride transit to turn out at public meetings, share ideas and provide input online, and contact their elected officials about the project. Priorities include dedicated transit lanes, enhanced and fully separated biking and walking paths, and safer and easier east-west access to the lakefront.

In early 2018 Active Trans led a coalition of 10 civic and business organizations calling for dedicated transit lanes to boost bus speeds and reliability.

Template:
Detail template with subnav
Parent Page:
Walking
Teaser:
Walking and cycling must be safer and more convenient along our lakefront, and transit options should be more accessible.
Featured Image: