Home / Blog / Oak Park to get Divvy and Neighborhood Greenways

Oak Park to get Divvy and Neighborhood Greenways 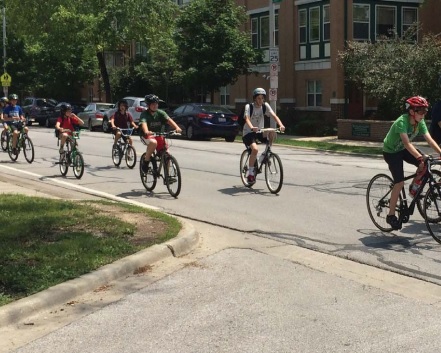 As a 20-year resident of Oak Park, I’m excited to share a number of changes coming to Oak Park that will improve conditions for biking and walking.

Last week, the village board approved the Oak Park Neighborhood Greenways system as an addendum to its 2008 bike plan. Elements of the 2008 bike plan have already been adopted, such as significantly more and better bike parking near transit stations, bike lanes, wayfinding signs and creating a village government bike fleet.

Despite these improvements, many people tell me they are afraid to ride in Oak Park when they have to deal with high traffic and high-speed streets, even if those streets are marked with a typical bike lane.

We know from surveys that most people feel this way, and that is the inspiration for Oak Park’s Neighborhood Greenways, which will be a network of bike and walk priority streets that exists solely on side streets where the average person is more comfortable biking and walking.

The greenways plan calls for marking these streets with advisory bike lanes, deploying traffic calming strategies and adding intersection treatments where the network crosses busy streets that don’t currently have a stop sign or traffic light for oncoming traffic.

The goal is to allow people to safely walk or bike all around Oak Park on calm, low stress streets — without having to use high traffic streets.

Oak Park is the among first communities in Illinois to adopt a comprehensive list of tools and recommendations for Neighborhood Greenways design.

Now, we need to get the system built, and we’ll keep an eye on the village’s budget for this!

Divvy has been wildly popular in Chicago, logging up to 25,000 trips per day and introducing tens of thousands of locals and tourists alike to urban cycling.

Oak Park and Evanston will be the first Chicago suburbs to get bike sharing!

Active Trans was pegged by Oak Park to help identify locations for the first 12 Divvy stations. We recommended 12 locations with a 13th wild card, which will provide good coverage for the first phase of the program. A second phase of stations would be needed to fill in the gaps.

Check out our report on Divvy locations and the Greenways System, and you can read a story about it published on the Chicago Tribune website as well.

Hats off to our outstanding Senior Transportation Planner Heather Schady for her work on this!

More exciting news! The founders of Green Line Wheels have tapped Active Trans to manage the organization beginning in August.

Greenline Wheels is located in Oak Park at 105 S. Marion and was founded in 2010 by a local family seeking to elevate the bike friendliness of the Oak Park/River Forest community.