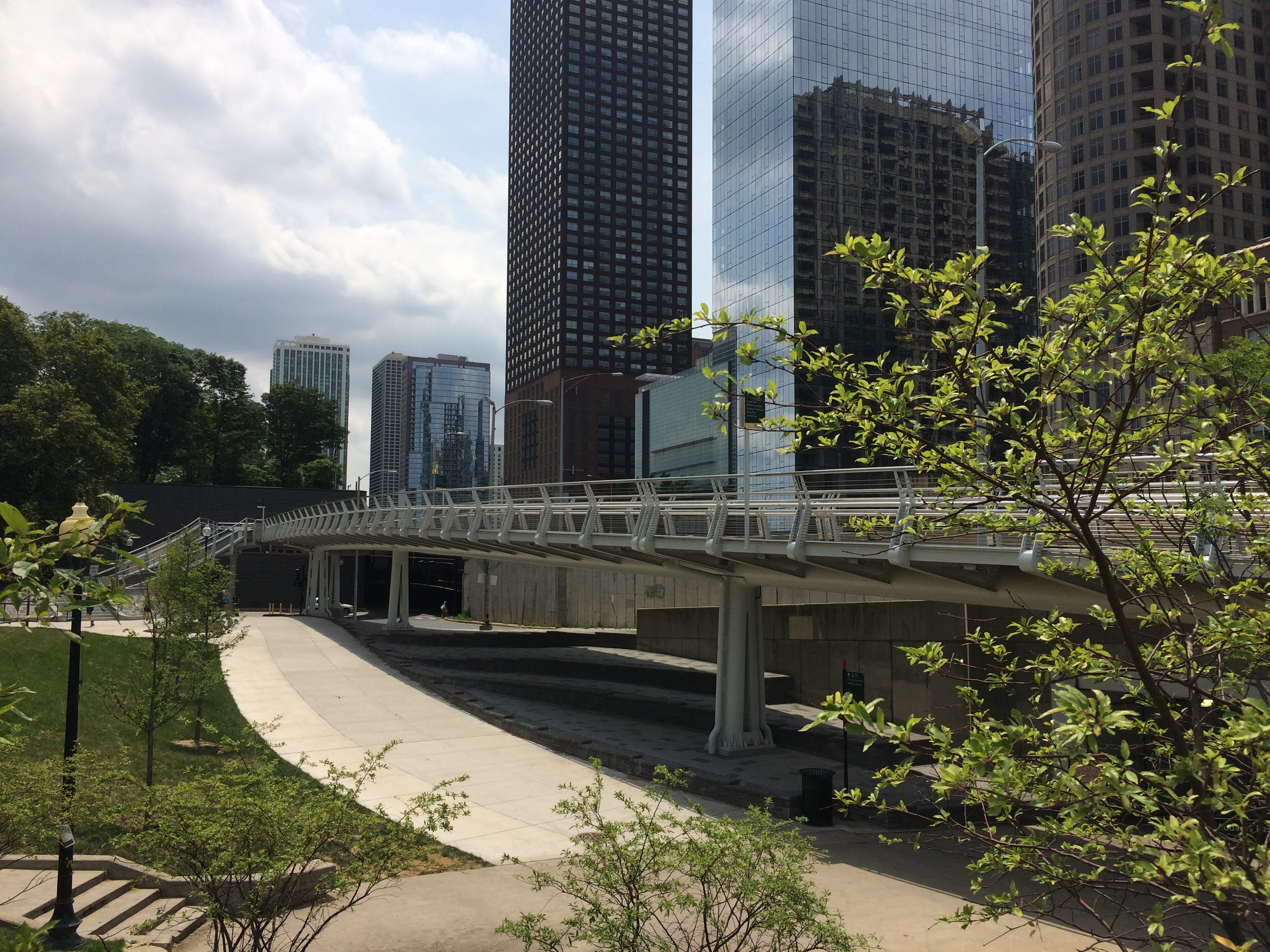 If you’ve experienced the congestion and safety issues along Chicago Lakefront Trail near Navy Pier, you’re probably excited about the new elevated path for pedestrians and bicyclists over the Chicago River called the Navy Pier Flyover.

The flyover will make this stretch of the trail much easier — and far more pleasant — to use while also enriching Chicago’s cityscape with an iconic, one-of-kind structure that people can be proud of.

Pedestrians and bicyclists who now use the Lakefront Trail near Navy Pier face a dangerous, confusing journey. With cars whizzing by, they have to traverse a narrow sidewalk along Lower Lake Shore Drive that has poor sight lines and traffic conflicts at the very busy intersections at Grand Avenue and Illinois Street.

That’s why in the late 1990s, Active Trans began advocating for a flyover to create a safe space for pedestrians and bicyclists.

The Chicago Department of Transportation embarked on the Navy Pier Flyover initiative in 2001 and began construction on it in 2014.

When the flyover is completed at the end of 2018, pedestrians and bicyclists will be able to safely navigate that part of the Lakefront Trail by using an elevated bridge that stretches from Ohio Street Beach on the north side of Chicago to DuSable Harbor on the south, running parallel along Lake Shore Drive. A spur ramp will extend east toward Navy Pier.

The Navy Pier Flyover will feature a 16-foot-wide path with designated lanes for bicyclists and pedestrians. Safety features will include guard and hand rails and lights that will illuminate the path at night. It will also have signs, maps and pavement markings to direct users to major landmarks like the Museum Campus, beaches, parks and Michigan Avenue.

But the flyover isn’t just about function. Because it is located in a prominent part of the Chicago, CDOT also wants the flyover to be an iconic architectural structure in the city.

The main design feature of the flyover will be its serpentine form, curving around parks and buildings. A visually striking steel rib superstructure will support the bridge and accommodate its curves.

“We want the flyover to create a feeling of safety and comfort for all users, but we also want people to feel pride and excitement for it,” says Luann Hamilton, deputy commissioner of the Division of Project Development for CDOT. “We could have built a standard, preset bridge along Lake Shore Drive, and it would be a lot quicker. But we hope the flyover makes you feel pride and stirs a love of our place.”

A longer version of this post appears in Active Trans' quarterly printed newsletter that all members receive. Not a member? Here's the remedy.